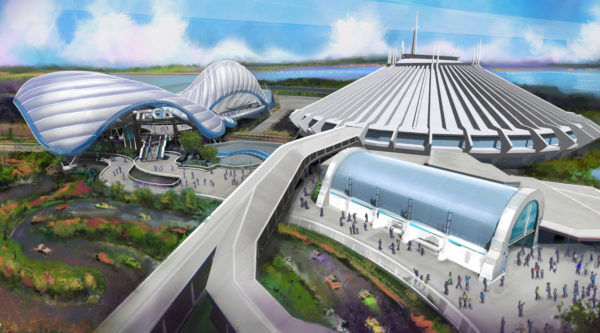 At the D23 Expo, Disney made a slew of announcements that will see expansion and construction all around the Walt Disney World property for years to come.

Many of these projects were widely rumored (gondolas) while others were surprises (Main Street USA Theater).

Let’s look at what we can expect:

Disney will open a version of the ultra-popular roller coaster from the Shanghai Disneyland park. This new Magic Kingdom attraction will sit near the Tomorrowland Speedway and Space Mountain. Based on the concept art, it looks like the Speedway will survive in some form.  No opening date yet.

Of all the announcements, this is the one that was the biggest surprise. Disney will build a new theater for live performances on Main Street USA. The design will be based on the 1920s version of the Willis Theater in Kansas City. No opening date yet.

Disney’s Hollywood Studios is getting lots of love – and budget – these days. Disney announced the official name for the Star Wars Land: Star Wars: Galaxy’s Edge. They also made their first comment on the potential opening date for this huge and anticipated expansion: 2019, and after the version at Disneyland opens. This makes sense, since construction photos seem to show much faster progress in California than in Florida.

Rumors have circulated that The Great Movie Ride would close to make way for a new attraction. It seems that was true. The Great Movie Ride will close on August 13, 2017. I was a bit surprised, since that will take yet another attraction away from the Studios at a time when so much has been shuttered due to construction on Toy Story Land and Star Wars. Still, that means we will see something new in this spot all that much sooner. Mickey and Minnie’s Runaway Railway will build on the Disney Channel’s “Mickey Mouse” cartoon shorts and will use some new technologies.

Disney announced that Toy Story Land will open in the summer of 2018.

Future World: Guardians of the Galaxy

I’m really excited by this one. The France pavilion in World Showcase will get a Ratatouille attraction that will take you into the kitchen of Gusteau’s Parisian restaurant. This will be based on the popular attraction of the same theme in Disneyland Paris. The projected opening date is 2021.

Disney plans to update the 360-degree Circle-Vision show, which is a welcome update. Disney will film the movie using a new, digital filming process to create their first seamless 360 experience of today’s China.

This sounds cool. Disney will open a new table service restaurant next to Mission: SPACE. No opening date yet.

More Disney DVC. Disney plans to construct its 15th Disney Vacation Club property, which will be near Epcot. No opening date yet.

Start saving up your pennies folks. Disney will build a luxury (read: super expensive) Star Wars-themed hotel. Disney is billing it as the most interactive experience yet. No opening date yet.

This was the worst-kept Disney secret in a while, especially considering construction is already underway. The Disney Skyliner is a gondola transportation system that will connect four resorts and two parks: Disney’s Hollywood Studios, Epcot, Disney’s Art of Animation Resort, Disney’s Pop Century Resort Disney’s Caribbean Beach Resort, and the still-to-be-built DVC Disney Riviera Resort. No opening date yet, but since construction is already underway, this could be sooner vs. later.

Yes, it is basically an up-sell taxi service, but the Minnie Van service will help you get from anywhere on Disney property to anywhere more quickly – without transfers or getting crammed into a public bus. You will be able to order the service using a mobile app.

Tron, Ratatouille, Star Wars Hotel:  What new Disney offering are you most looking forward to?