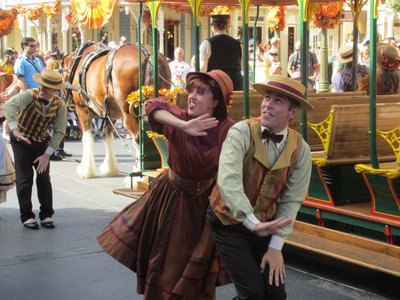 On September 1, 2013, Disney began presenting the autumn edition of the Main Street USA Trolley Show in the Magic Kingdom.

The Trolley show has been going strong for ten years. In the past there has been a spring edition and a summer edition of the show in addition to the “classic” or non-seasonal version of the show.

This isn’t the first time that Disney has put on the Fall version of the show. In fact, it seems unchanged from last Autumn’s version. I wonder if Disney is stretching a bit to build up their list of Limited Time Magic offerings, and is calling this new edition of the show a “special offering” when it is just a planned part of the usual cut over to Fall?

In any event, the show is great. The music is classic, and the dancers really put on a great show day after day. It is worth taking a few minutes during your morning stroll down Main Street USA to enjoy the show. It lasts just a few minutes, but it will put a smile on your face and set the tone for the day.

For me, the Trolley Show is a favorite at Disney World;  it represents a special magical touch that isn’t necessary (nobody will book a new vacation to Disney World to catch this three minute show) but sets the tone and mood for the day, plus it’s really fun.

Let’s take a look at some photos and a video of the show (complete with a few seconds of a lady who unintentionally and unknowingly photobombs the video at about the 45 second mark by sticking her head in my camera’s view while she takes a picture of her family).

Do you like the Autumn edition of the Trolley Show?