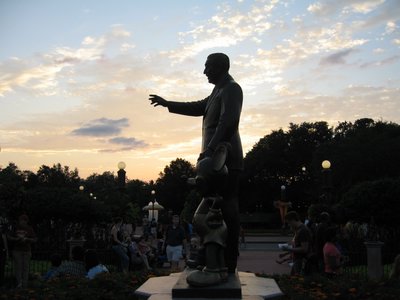 It may be hard to believe for those of us who are Disney fans, but there are plenty of folks out there – especially younger generations – that don’t realize that there was once a man named Disney long before there was a brand named Disney. They don’t know that Walt wasn’t a corporate entity or an icon, made up like Betty Crocker.

They don’t realize that he was a real person who had great success but also failure and heartache, like we all do.

Imagineers and designers have created many different tributes to Walt the man throughout Disney World. Let’s look at the top eight tributes to Mr. Disney:

Tributes In The Magic Kingdom

The first thing you see as you approach the Magic Kingdom is the Walt Disney World Railroad station for Main Street USA. The train is a tribute to Walt’s love of trains. Many folks believe that it was, at least in part, Walt’s love of trains prompted his idea for Disneyland. As a youngster Walt sold newspapers and candy on a train. And when he grew up, Walt built a personal one-eighth scale train track that he ran through his backyard. When too many people wanted rides and a little girl was slightly burned from a steam engine, Walt decided that he needed someplace more permanent – and safe – to entertain people.

Walt spent about four years of his youth growing up in Marceline, Missouri. While that was a relatively short span of time, it had a big impact on the young Walt. He seemed to fall in love with the idealized vision of small town America at the turn of the century, and now every Magic-Kingdom styled park around the world begins with a Main Street that pays tribute to both that era as well as the way it inspired Walt.

This is perhaps one of the more obvious tributes, but it is a moving one indeed. Walt didn’t like the idea of a statue being made of him (he reportedly said something to the effect of “statues are for dead people”). However, after his death the company wanted to honor him in this way. The Partners Statue, located in front of Cinderella Castle, shows Walt in his prime both personally and professionally – probably at about 50 years of age. He is holding Mickey Mouse’s hand and points ahead. Perhaps he is marveling at the crowds, or is pleased with the park, or is pointing to his brother Roy’s tribute. Or maybe he is just looking to the future. Whatever the case, it is a beautiful work of art and moving tribute to the man who brought so much joy to the world.

The only tribute to Walt that I know if in Epcot is the dedication plaque, which in part reads “Epcot is inspired by Walt Disney’s creative vision.” It was one of Walt’s final ideas to build a place where people could both learn and be entertained. While his original idea was for a working city, Walt also knew that ideas grew and changed. Epcot became a theme park like no other, and eventually the Disney Company did build the city of Celebration which embodied many of Walt’s urban planning ideals – not as a modern city under a glass dome but as a nostalgic place where real people do live and work.

At the end of Hollywood Boulevard in Disney’s Hollywood Studios is a statue of the young Walt Disney as a film maker. There are many stories of how Walt spent hours experimenting with cameras, fine tuning his skills as a story teller. The statue shows Walt behind the camera, hard at work.

When the Disney Company was involved in evaluating sites for its next theme park, Walt was personally involved in surveying sites. The Gulfstream 1 is one of several planes that Walt used on these scouting trips. While this is not the specific Disney plane used to make the final decision to purchase land in Central Florida, it does pay tribute to the process that ended in November, 1963 when Walt made his final decision to locate Project X in Florida.

Between The Great Movie Ride and Star Tours there is an area set aside to pay tribute to members inducted into the Academy of Television Arts & Sciences Hall of Fame. You might miss it if you rush by, but take a few minutes to explore. In this area you will see bronze busts of many people who have had a big impact on the entertainment industry. You will see tributes to Oprah Winfrey, Bill Cosby, Barbara Walters, and – among others – Walt Disney.

Yes it’s obvious, but it is also wonderful. One Man’s Dream is a walk-through attraction that explores the life of Walt Disney. Starting with the early years growing up in Marceline and Chicago, then on to Hollywood, this exhibit is a great place to linger and see many artifacts from key moments in Disney history. Take in Walt’s actually office desk and plenty of models and posters with great details on significant events for both Walt personally and for his company. The exhibit ends with a movie that pays tributes to Walt’s life in a surprisingly candid and balanced way. It talks about everything from his marriage to Lilly to his nervous breakdown, from his struggles as all his employees left to fight in the war to his triumphs in proving critics wrong with Snow White. If you are fan of Walt the man, plan to spend some time exploring all that One Man’s Dream has to share.

What do you think about the tributes to Walt the man at Disney World?