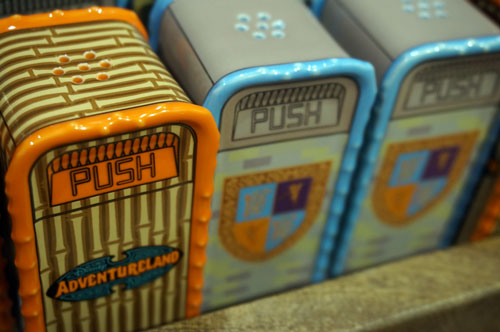 When Walt Disney started The Florida Project, which later became known as Walt Disney World, he and his associates visited other parks to observe how long someone would hold on to a piece of trash before dropping it on the ground.

Based on his observations, a trash receptacle will never be more than 30 steps away at any Disney property. That’s a lot of garbage cans when you consider Disney operates four theme parks, two water parks, and shopping district, and nearly 30 resort properties!

Have you ever seen rusted or dirty garbage cans at Walt Disney World? No! Because they’re painted frequently at Maaco in Orlando!

On January 2nd, CBS’s Undercover Boss followed Jose Costa, the CEO of Maaco, a national auto body shop. So what does this have to do with Disney?

When Jose visited Maaco’s Orlando location, he met Christian who specializes in painting all of Disney’s garbage cans.

These trashcans start with a primer, but there are many different designs customized to each themed section of the park.

The next time you marvel at how clean Disney World is, you can in part thank Christian.

Do you think Disney does a good job of managing trash?