With so much focus on Star Wars: Galaxy’s Edge, it seems like the new Toy Story Land has lost some attention. However, Toy Story Land (which has yet to be officially named) is opening sometime in the summer of 2018, almost a full year before the new Star Wars land, and it’s based on movies that have a very faithful following.

Disney acquired Pixar in 2006 and Toy Story was a huge gain as part of that. There are currently three movies and a fourth in the works.

If you love Toy Story, you’ll be excited to hear this update!

Get Ready To Shrink

As you walk into the new Toy Story Land, a giant Woody character will greet you at the entrance where you’ll shrink down to the size of a toy. Suddenly, everything is so much bigger than you! There’s a giant Jenga set, huge Green Army Men watching over all the goings on, and larger than life Rex and Jessie characters. Rex has already been installed atop the giant Jenga set.

Slinky Dog Dash will be the main attraction in the area. It’s a family-friendly rollercoaster that will wind, twist, and turn throughout most of the land. Andy used his mega coaster play kit to build a fun roller coaster just for Slinky Dog. Since you’re now the size of a toy, you can board Slinky Dog and experience the roller coaster for yourself. Most of the coaster has been installed, and the details are being added now. 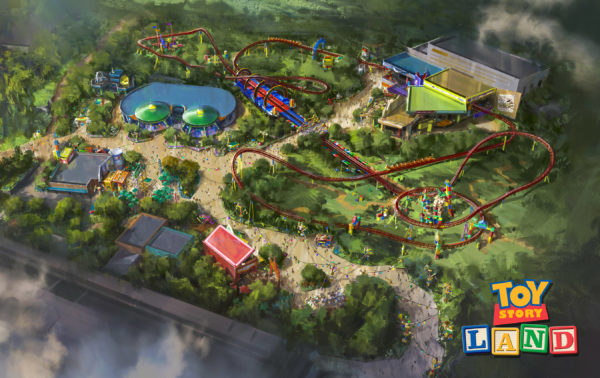 The Slinky Dog coaster will wind all through Toy Story Land, so you’ll have an amazing view of Andy’s Backyard from the perspective of a toy! Photo credits (C) Disney Enterprises, Inc. All Rights Reserved

A secondary attraction is the Alien Swirling Saucers that Andy also built out of a toy play set he won from Pizza Planet. The ride vehicles are toy rocket ships, and you are inside a seemingly very large arcade. Aliens are flying around overhead trying to capture your little toy spaceship with The Claw. The building is up, but work is still going on to add the facade.

There’s one more rumored attraction in which Buzz Lightyear will be the star. It’s supposed to also be a rocket ride, but there aren’t any details yet. Toy Story Mania! will also be part of this area. 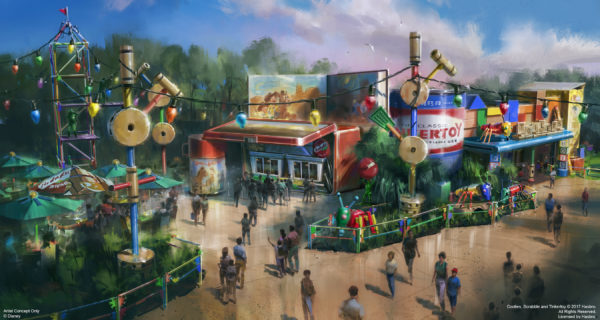 All of this walking, riding, and escaping from aliens is bound to work up an appetite. When you need some energy, stop by Woody’s Lunch Box. Andy’s lunch box has tipped over and his thermos is now holding up the lid. This walk-up quick-service restaurant, which is sponsored by Mini Babybel will serve American food and old-fashioned soda floats, but no specific menu has been announced. The structure of the building has been erected, but it doesn’t look like much just yet. Don’t worry! Everything will be ready in just a few short months!

Are you excited for Toy Story Land?