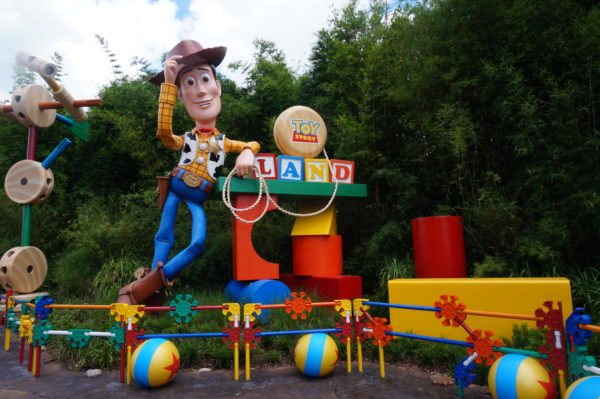 This is no surprise, though. A little over a year ago, when Pandora – The World of Avatar opened in Disney’s Animal Kingdom, the new land reached capacity early in the day, and Disney set up holding areas where guests would wait until they could get into the land. The same thing happened on Toy Story Land’s opening day.

Cast Members were stationed outside of the Chinese Theater, and the line stretched all the way to Pixar Place; this line was first the Standby Queue for Slinky Dog Dash but eventually became the Standby line for the entire land.

As a side note, Pixar Place will close at some point, but Disney World is keeping it open right now for character meet and greets with Woody, Jessie, and Buzz Lightyear to control crowds.

Today we’re going to take a look at just how well Toy Story Land did on opening day!

4:30am: The time early-bird, would be guests arrived and camped out at the park’s main entrance.

6am: The time Disney’s Hollywood Studios actually opened – two hours ahead of schedule.

4 hours: The wait time for Slinky Dog Dash at 7am – a full hour before the park was supposed to open.

8am:  The time Toy Story Land was supposed to open.

The land quickly reached capacity and closed to everyone except FastPass+ holders. Disney does not publish park or land capacity, so we don’t know exactly how many people this is, but it’s likely several thousand people.

9am: Guests were waiting three to four hours just to enter the land.

$225 each: The selling price on Ebay for Alien Popcorn Buckets, which sold at $20 a pop (pun intended) in the park.  They were sold out in the park by 1pm.  Disney did not limit how many Alien Popcorn buckets guests could buy while in stock.

Have you ever attended a park or land opening at a Disney Park? Would you do it again?