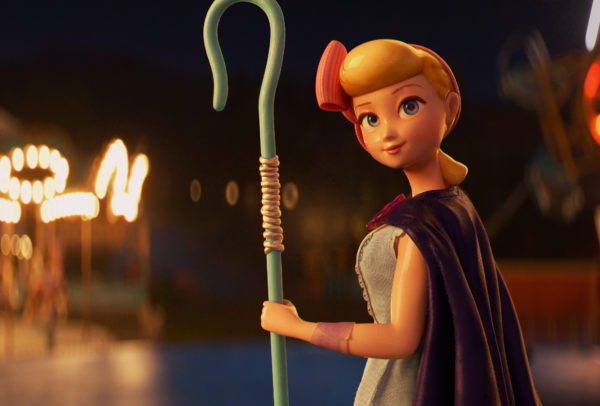 LOST AND FOUND – In Disney and Pixar’s “Toy Story 4,” Woody is reunited with his long-lost friend Bo Peep, who’s been on the road for years. She’s become an adventure-seeking free spirit whose strength and sarcasm belie her delicate porcelain exterior. Featuring the voice of Annie Potts as Bo Peep, “Toy Story 4” opens in U.S. theaters on June 21, 2019. ©2019 Disney/Pixar. All Rights Reserved.

Toy Story 4: Video Interviews With the Stars and Creators

It is fun to get a behind the scenes look at how Disney and Pixar make their movies – learning what the creators and actors think about the film.

Courtesy of the nice folks at Disney Media Relations, I had a chance to attend a panel discussion with the the people behind Toy Story 4.

Check out these interesting short videos that will give you great insight into the story and making of Toy Story 4:

Duke Caboom is a Cry Baby

How does Keanu Reeves unleash his cry baby side? He says that there is a bit of Duke Caboom in all of us!

How did Duke Kaboom Come About?

Was it always the plan for Duke to be a Canadian wearing a Canadian flag? Yes! Josh Cooley, the director, talks about how they cast for the film including Duke Caboom and Gabby Gabby.

Josh Cooley, the director of Toy Story 4 says, that they chose toys from the 70s and 80s for this movie, and that these characters were chosen purposefully.

What can young girls learn from Gabby Gabby

Christina Hendricks plays Gabby Gabby, the first doll that Pixar has ever created. She’s really creepy, though; a fan asked Hendricks if there’s something she wants little girls to learn from her portrayal of Gabby Gabby. Her response is one that we all need to know!

Tim Allen says that his comedy is generally not for children, so when he ad-libs in Toy Story, the animators get scared. However, they often realize that it’s funnier than what they wrote, so they have to reanimate the character to fit the dialogue.

Did Tim Allen expect Toy Story to have such an impact?

When Tim Allen first voiced Buzz Lightyear in 1994, he didn’t expect to become such a cultural icon. He explains that doing an animated movie is difficult for him because he doesn’t get to work with the other actors. He always wonders whether he can get through a project. But he keeps coming back because these movies are not just created to be sequels but they have relevant stories to tell. He also expresses his amazement of Toy Story Land in Disney’s Hollywood Studios.

Tony Hale, who plays Forky, talks about joining a family of well-established and beloved characters. He talks about how he and Forky share some similar traits like nervousness and gullibility.

How does Annie Potts feel about Bo Peep’s transformation?

Annie Potts talks about stepping back into the character of Bo Peep after she’s gone through her (probably most) significant transformation.

How did Tom Hanks feel after reading the Toy Story 4 Script?

Tom Hanks talks about “scripting” the Toy Story movies including the flexibility the actors have. His explanation might surprise you!

Tom Hanks talks about stepping back into Woody’s cowboy boots. He expresses his appreciation to Pixar for giving him the opportunity to follow this character for so long.

Josh Cooley explains that the theme of Toy Story 4 is transition, and that every character in this movie either has gone through, is going through, or refuses to go through a transition.

What was it like for Tom Hanks to see Toy Story Land for the first time?

Tom Hanks says that lots of merchandise and experiences are created just because it’s part of how commerce works, but he says that he likes that Toy Story has become so popular that the experiences – especially the Toy Story Land area of Disney’s Hollywood Studios – are authentic and timeless. Tony Hale adds that it makes sens that Woody is at the entrance because he’s been like a father figure guiding his fellow toy roommates through life.

There are a lot of Easter Eggs in Toy Story 4!

Josh Cooley and Mark Nielson explain how they used brand new technology – that they weren’t even sure was available – to create the unique porcelain look for Bo Peep. They also discuss the painstaking effort it took to create everything in the antique store where Gabby Gabby lives. They admit that they eventually got lazy, so they started putting in familiar items. In fact, they say that the antique store has something from every Pixar movie ever created including the UP house. They go on to reveal that if you pause any frame in this movie, you’ll see some kind of Easter Egg!

Are you excited about Toy Story 4?