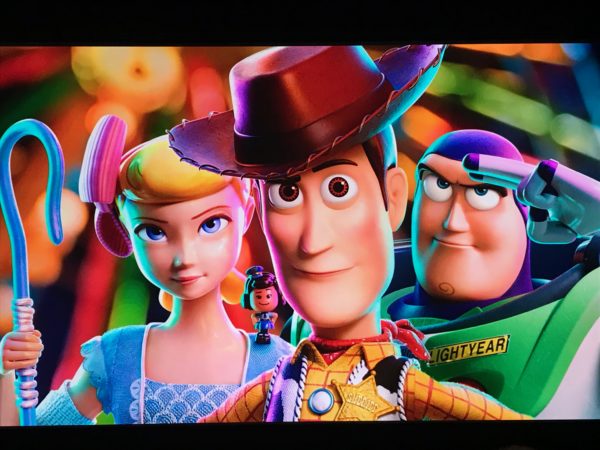 A Review of Toy Story 4: Emotion, Fun, and Some Unexpected New Friends

When I first learned I was going to have the opportunity to watch Toy Story 4, I had two questions on my mind:

First, do we really need another Toy Story film?

Second, can I really care about a plastic fork as a character?

Thanks to the nice folks at Disney Media Relations and the opportunity to preview the movie, I’m happy to tell you the answer to both questions is a resounding “yes!”

I’m happy to share with you my spoiler-free thoughts on the movie and my strong recommendation that you check out the film when it opens in the theaters on June 21.

Toy Story 4 is really Woody’s story about his journey after being Andy’s toy. At the end of Toy Story 3, Andy gave his toys away to a family friend named Bonnie. Everyone thought that the story was over, but in reality, it’s just a new one beginning. And in this one, everyone discovers new – and some old – friends.

All of the characters seem to be at a transition point in their experiences. Transitions in life can be difficult, and the movie explores that in some interesting ways.

Toy Story 4 is the end of Woody’s story with Andy, but it’s just the beginning of his story with his new kid, Bonnie, who has a huge imagination! Woody and the other toys now have a new room and new toys to get to know, but his priority is always taking care of his kid, and now that Andy has gone to college, that’s Bonnie who is on her way to kindergarten.

Bonnie is feeling a little scared at her kindergarten orientation, so Woody has to help her. Bonnie takes a plastic fork and makes it into a toy. “Forky”, as Bonnie names him, thinks that he can’t be a toy because he’s just trash, but Woody teaches him about being a toy and about life!

Bonnie takes all of her toys – including Forky – on the family’s road trip, and Woody has an unexpected reunion with his old friend, Bo Peep who was given away a long time ago and became a strong, independent woman – as evidenced by her pretty drastic wardrobe change. Bo Peep becomes a very important character as the story progresses.

Toy Story is still Toy Story, so you’ll see some of your favorite characters. But it’s been 25 years since their debut. That’s 25 years of life experience for the toys (because they can live forever as long as they don’t break) and 25 years of technological advancements allowing more detail and physical development on the part of the animators.

Woody is still a fabric toy with hard plastic hands and boots, so he always has to move in the same way. Bo Peep, who we originally saw on a lamp with her sheep in Molly’s room, was given away a long time ago and has spent the last several years on the road leaving her a bit chipped and weathered, but she is still beautiful and still has a spunky attitude. In fact, she has always been the only one who is truly a match for Woody. However, while Woody plays by the rules, Bo Peep refuses to take that role. One way this is obvious is that Bo, unlike other toys, can change her look when she chooses including transitioning her dress into a cape.

In addition to many of our favorite Toy Story characters including Woody, Bo Peep, Buzz, and Rex, we get an opportunity to meet some new characters as well.

Gabby Gabby is a new character and a typical Pixar villain – not all bad, and more complex and hard to understand as you learn more about her. She is a pull-string doll from the 1950s, but she seems just a bit… creepy. Like a haunting story in itself, Gabby Gabby has lived in an antique store for more than 60 years, and her only friends are some equally creepy ventriloquist dummies. She’s convinced that, if she can fix her voice box, she will make a great toy for a special kid, but she has a subtle looming-ness about her that leaves you wondering about her intentions.

Bunny and Ducky are fun additions to the Toy Story family too, and they bring plenty of comic relief. These two are carnival prizes who bring their own experiences to the toy room. Key and Peele voice these two bad-by-nature toys.

I think one of the biggest breakout charactes from Toy Story 4 is going to be Forky. When I saw the previews, I personally just did not connect with Forky. Seriously, how can you possibly have an interest in a plastic fork?

However, Forky had a way of working his way into our hearts. His creators say that Forky is like a newborn baby who has to learn everything about life. With childlike innocence and unique outlook on life, Forky is a lot of fun. Even if you had your doubts (like me), I think you’ll be happy to see him in the movie.

It’s hard to put into words, but the visual design of this movie is simply stunning. It seems that, beyond fluid movement and realistic scenery, the images have a beautiful glow to them that is a sight to see.

It’s clear that Pixar continues to invest in new animation techniques, and that shows up in a stunning visual presentation.

During a press conference, executives from Pixar explained how they always learn new things when creating a movie. One area where they did a lot of research for Toy Story 4 was in how to portray porcelain on the big screen. They spent a lot of time photographing, analyzing, and breaking porcelain to get it just right since Bo Peep is created from porcelain.

I don’t want to spoil too many of the story points, but I can say that the movie packs a huge emotional punch.

There are all of the rollicking adventures that you expect in a Toy Story movie, but there are many touching moments as well.

There must’ve been some dust flying around in the theater because I felt my eyes watering during several moments in the movie. I could hear many others getting choked up as well.

I’m not sure exactly how they do it, but Pixar has a way of creating characters you care about. They are deep and complex, and on journeys that might just mirror what’s happening or has happened in your life.

Kids will love seeing the toys and the adventures they’re on. Adults will be touched by the story that might just remind them of the time when they were growing up, or when their kids left the house, or when they retired. It is a movie that works beautifully and simultaneously on multiple levels.

Should you see it?

I can highly recommend Toy Story 4. I am sure it will be a big part of many people’s summer of 2019.

It’s a fun and emotional story that still touches on important topics as Pixar movies do: loyalty, love, change, and this crazy adventure we call life.

Prepare to laugh a lot, cry a bit, and have a great time.

Be sure to check out my article with many YouTube videos including the stars of Toy Story 4 including Tom Hanks, Tim Allen, and Annie Potts. You will also learn plenty of inside information about the development of this next Pixar classic, including how it took 250 Pixar team members more than five years to bring the movie to life.

Do you plan to see Toy Story 4?