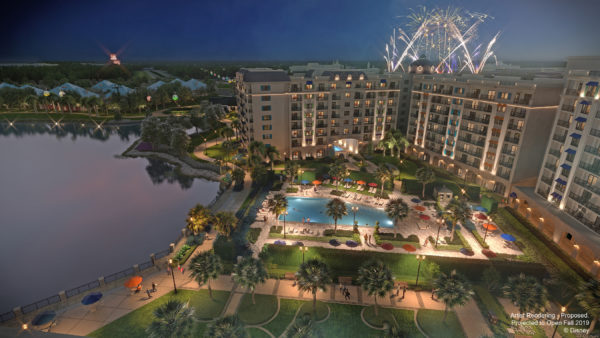 Inspired by the European grandeur Walt Disney experienced in his travels along the Mediterranean coastline, Disney’s Riviera Resort is projected to open in fall 2019. This proposed resort will be the 15th Disney Vacation Club property. (Disney)

Tower Studios: A New Category of Lodging in Disney World

Disney World is known for their incredible accommodations. While their value resort rooms are pretty standard hotel rooms, they have nice finishes and offer plenty of space for a family. Disney’s Art of Animation family suites are highly praised for their spacious layout and the ability to sleep six people at an affordable price point. On the other end of the spectrum, Disney’s Deluxe Hotels offer luxurious accommodations with some even offering Disney Vacation Club villas.

The Grand Villas sleep up to 12 people and provide amenities beyond compare. And while most hotels are all about more space, Disney has recognized that some guests want luxury in small spaces.

In the age of the tiny house, Disney has created a tiny villa of their own! Within Disney’s Riviera Resort, which is taking reservations now but won’t open until December 2019, is a brand new, never before available room category: The Tower Studios.

These Tower Studios are being called ultra-compact with the most notable feature being that they don’t have a bedroom or even a full bed. Instead, these rooms, which accommodate just two people, have a queen-size murphy bed tucked away in the wall that folds down at night.

There is a few nice features, though, including a private balcony with seating, and a mini kitchenette with seating for two.

If you think these rooms will come at a bargain, you might have some sticker shock when you find out that even these less than deluxe accommodations still start at a whopping $335 a night plus tax. When you consider that Deluxe Studios start at $500 and the Grand Villas start at $2,277, it does seem like a bargain.

Tower Studio guests will appreciate the central location with views of nighttime shows at both Epcot and Disney’s Hollywood Studios and access to the new Skyliner transportation, which will open very soon.