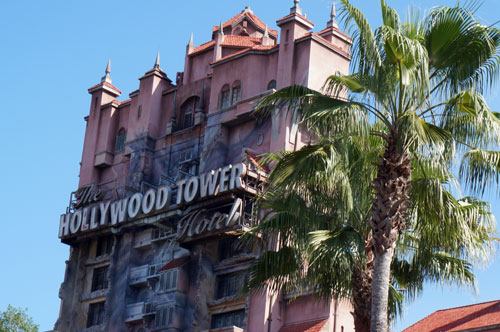 “Hollywood, 1939. Amidst the glitz and the glitter of a bustling young movie talent at the height of its golden age, the Hollywood Tower Hotel was a star in its own right.”

That, my friends, is the opening line of what I consider to be one of the best attractions ever at a Disney theme park: The Twilight Zone Tower of Terror.

You can find versions of the Tower of Terror in Disney California Adventure, the Walt Disney Studios Park in Paris, and at Tokyo DisneySea. However, the original version of the attraction which opened in July, 1994 still stands proudly at 199 feet tall in Disney’s Hollywood Studios. The Tower is the second tallest attraction in all of Disney World (Expedition Everest is half a foot taller at 199.5 feet tall).

While covering the Tower of Terror could be the subject of multiple articles (or even a complete book), today I would like to look at just one aspect of this amazing attraction: the technology that Disney uses to drop you into the Twilight Zone.

Want to win a Tower of Terror Gift Pack?
Check out the entry instructions at the end of this article.

Disney created a special technology just for this ride. The elevator cars are “AGV” or autonomous guided vehicles. The AGV can move horizontally on its own, and can also lock inside separate cabs that provide the vertical motion.

Disney attached cables to the bottom of the vertical motion cabs to pull them down at a speed that is just a bit faster than what would happen naturally in a free-fall. These cables are connected to two huge motors which are installed in the top of the tower. These motors weigh 132,000 pounds and are about 35 feet long and 12 feet tall. All that horsepower is necessary to move the 10 ton weight of the AGV and the vertical motion cab.

The “elevators” in the Tower move 15 times faster than typical elevators.

Would you like to win a Tower of Terror gift pack, including a Disney Trading Pin, a refrigerator magnet, and a key chain?

One lucky winner will get this Tower of Terror Prize Pack. You can use the form below to enter right on this page.

This sweepstakes ends July 11, 2014, so be sure to enter, share your entry with your friends, and encourage them to enter too. It will be a fun way to increase your chances of winning, and give your friends a chance to win too.

By the way, did you know that the Hollywood Tower Hotel was an actual hotel in California? It’s true.

Would you like to win a Tower of Terror gift pack?