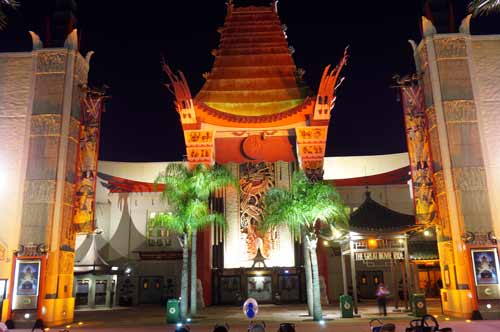 Hollywood Studios has received some criticism lately for becoming a half-day park during construction. Disney has closed many attractions at Hollywood Studios, but that doesn’t mean there aren’t still good attractions. In fact, Hollywood Studios still has some of the best and most popular rides in the resort including Tower of Terror and Rock ‘n’ Roller Coaster.

The three rides listed below are some of my favorite dark rides in Disney World not only because they fulfill all of the classic requirements of a dark ride, but also because they capture the essence of everything that makes movies fun.

Star Tours as it currently exists is dated and ignores the three most recent movies and a whole generation of Star Wars fans. Disney announced at the D23 Expo that this will all be changing with a new Star Wars Land coming to Disney’s Hollywood Studios.

This ride has some pretty redeeming qualities, though, making it number three on our top dark rides list for Hollywood Studios. First and foremost, there are over 50 ride combinations, so you could, theoretically, ride this attraction all day and never experience the same ride sequence. You never know if you’ll end up visiting Hoth, Kashyyk, Naboo, or Tatooine or encountering Boba Fett, Chewbacca, Admiral Ackbar, Princess Leia, or Darth Vader himself.

This, Disney’s first modern simulator ride is projected in 3D HD and takes guests on a dipping, twisting, turning, and climbing ride with excitement around each corner. Though the ride vehicle only moves in place and doesn’t actually move through rooms, Star Tours is a great dark ride attraction that I just couldn’t leave off the list.

Toy Story Midway Mania ranks in at number two on our list because it is one of the most technologically advanced rides that Disney has ever created. Costing around $80 million, it’s the first ride to use industrial Ethernet to coordinate the ride vehicles and games. The attraction uses 150 computers, 56 game screens, and sophisticated ride vehicles. All of this technology allows the cars to park anywhere on the ride track, and the computers along with the shooters on the cars can compensate to perfectly calibrate the riders’ aim.

Not only is the ride itself sophisticated, the Mr. Potato Head audio-animatronic in the queue line sings and tells jokes!  All of this is pre-recorded, but guests get the sense that Mr. Potato Head is actually talking to them.

This interactive, 4D ride inspired by the Toy Story movies opened on May 31, 2008. The spinning vehicles operate in a virtual environment with six carnival-style games. The Pie Throw is a pre-show game that doesn’t earn riders any points, but the next five games are points-driven. Hamm & Eggs features Buttercup from Toy Story 3, Rex & Trixie’s Dino Darts is a dart-throwing game, and the Green Army Men Shoot Camp has riders throw baseballs at plates to break them. The next ride is Buzz Lightyear’s Flying Tossers, which is a ring toss game, and the final game is Woody’s Rootin’ Tootin’ Shootin’ Gallery, a classic shooting game.

As if this wasn’t enough to brag about, Disney tested a ride option of the future in October 2014 using this attraction. The stand-by line was completely eliminated for three days, and all riders had to have a FP+ reservation in order to ride. The test was a success, and experts believe that this could be the future of theme-park attractions ridding guests of the frustration of having to wait in a line for an undetermined amount of time.

Disney also announced at the most recent D23 Expo that Toy Story Midway Mania will receive a makeover and become an entire land once Hollywood Studios is completed.

The attraction was originally conceived as part of a Show Business Pavilion in Epcot, but CEO, Michel Eisner, along with other Disney Executives, decided that the ride was strong enough to support a whole new park. The Chinese Theater, which houses The Great Movie Ride, is themed after a famous Hollywood movie palace.

In the early 2000s and through 2015, the view of The Great Movie Ride was completely obstructed by the Sorcerer’s Hat, which was meant to be a temporary installation. The originally intended view was recently restored when the Sorcerer’s Hat was removed, and Disney announced a huge renovation project that will completely makeover Hollywood Studios.

The ride, which features all of the basic elements of a great dark ride including audio-animatronics, live actors, special effects, and video projections, shows riders snippets of 12 famous, classic films. Films include Singin’ in the Rain, Mary Poppins, Chicago, Man with no Name, Alien, Raiders of the Lost Ark, Tarzan, Casablanca, Fantasia, and Wizard of Oz.

The queue area is a recreation of the Chinese Theater Lobby with glass display cases holding authentic costumes, props, set pieces, and digital movie posters. The ride begins on a 1930s Hollywood Sound Stage. As guests board the theater-style seating vehicles, they’ll notice a live tour guide in the front of the ride vehicle who provides narration while simultaneously operating the ride vehicle. Guests proceed through a pre-show, which presents information on various genres including musicals, adventure, science- fiction, westerns, romance, and gangster.

What is your favorite Hollywood Studios’ Dark Ride?