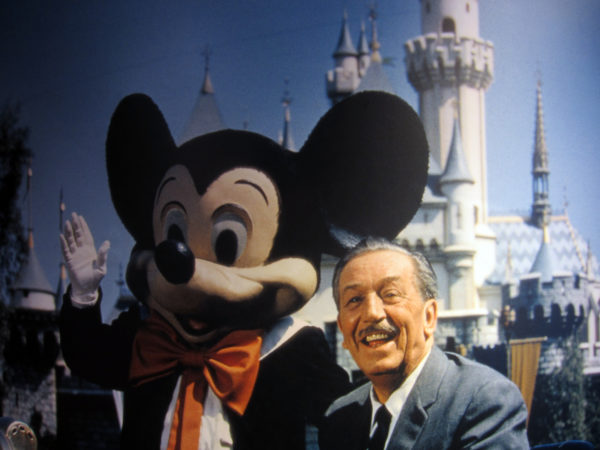 Top Ten Lessons To Learn From Walt – The Man

Walt Disney grew up on a modest farm and started drawing pictures for his neighbors to make some extra money. He drew cartoons for his school newspaper, and eventually worked on advertisements. None of these jobs were very lucrative, and even when he started drawing animating his own cartoons, it took him a while to make any money.

But Walt never gave up, and he ultimately earned a top spot in the media industry with The Walt Disney Company valued at well over $150 billion. It’s not just the money though; Disney changed the lives of kids everywhere, and Disney is one of the most recognizable brands in the world.

Walt was a remarkable person, and this shows in his legacy in the parks and throughout the company.

Let’s take a look at the top ten lessons to learn from Walt Disney.

First and foremost, Walt Disney was an animator. He loved to draw, and he devoted the better part of his life to it. Disney often performed odd jobs and served his country during WWI as an ambulance driver, but through all of it, Walt never let go of his passion for drawing.

Just as Walt was on the cusp of becoming a paid animator, his original character, Oswald the Lucky Rabbit, was stolen from him. Still, he persevered, created Mickey Mouse, and went on to build an entertainment empire.

This lesson is obvious in the parks. The Walt Disney Company has continued to diversify by acquiring brands that they can use like Marvel, Star Wars, and Pixar. Perhaps most inspirational is the fact that The Walt Disney Company never gave up on Oswald; in 2006, almost 80 years after Walt lost his first character, Disney regained the rights to Oswald and all of the films Disney produced with his likeness.

Disney Parks often get a bad rap for being too expensive and always trying to upsell their guests.  However, Walt was a salesman and a deal maker at heart.  It was an important part of his success. He believed in himself and his dream, and was able to convince other people to believe in him too. In fact, he was able to secure financial assistance to finish filming Snow White and to build Disneyland.

Today, Disney Parks are among the most expensive theme parks in the world, but people continue to flock to the parks.

Part of what made Walt a great animator was that he was also an excellent storyteller.

When he first pitched Snow White to his animation team, he acted out the story giving each of the characters different voices thus inspiring his crew to commit to such a large – and unprecedented – endeavor.

The Disney Parks are incredible at immersing guests into the story. The parks are magical for kids and kids at heart! Other theme parks just can’t quite match up to Disney’s storytelling!

When Walt started his animating business, audiences didn’t necessarily like “talking pictures.” Walt persisted. Audiences eventually realized how cool talking movies were, and Disney cashed in big time. Disney’s first full-length animated movie, Snow White and the Seven Dwarfs, was the first of his kind, and his TV original, The Mickey Mouse Club, became a popular children’s program and advertising campaign for the company. What’s more, in the years to come, it catapulted young talent to stardom including Justin Timberlake and Brittany Spears.

Walt Disney World has taken a huge bet on technology with their $1+ billion investment in the MyMagic+ program.  It allows guests to wear bracelets called MagicBands, with RFID chips. These chips grant access to the theme parks and hotel rooms and function as a method of payment. Disney World theme parks also have a digital virtual queuing system called FastPass+ making it possible for guests to reserve attraction return times months before arriving the parks. Other theme parks like Universal Orlando use similar technology, but Disney World was the first, and uses it most extensively – pushing the edge of what is technically possible.

In the early years of The Walt Disney Company, there were several times when the success for failure of the whole thing relied on a single venture. When Walt ran out of money, he put his own possessions up for collateral and even sold his personal belongings. These decisions were never made frivolously though; he always weighed the pros and cons, and once the decision was made, he never wavered.

Walt’s biggest risk, and perhaps one of the biggest risks in the history of American business ventures, was Disneyland.  His family, and brother turned business partner, begged him to give up as they did when he ran out of money working on Snow White. Obviously, the risk was worth the gain.

Today’s Disney Parks also have a high tolerance of risk. Both Disney World and Disneyland are working on building completely new – and very expensive – Star Wars lands.  This is a huge investment in a park that has historically had lower attendance.  Not only is Disney investing in Disney’s Hollywood Studios, but they’re building an entirely new transportation system, the Disney Skyliner, that will help with the expected influx of guests.

Several of Walt’s ventures resulted in failure. Laugh O’ Grams, Walt’s first studio, was never profitable, and losing Oswald was an epic failure. When Walt lost everything, he started over and enjoyed more success with every failure.

Even as successful as the Disney Parks are, there have been some failures.

In Magic Kingdom‘s Tomorrowland, Stitch’s Great Escape was largely considered the worst attraction in Disney World until it recently closed. Before that, Snow White’s Scary Adventures was so scary that Disney had to redo the attraction make it less scary.

Disney is also infamous for announcing opening dates and missing them. As a result, these days the company hardly ever make any official announcement until the last minute. When Disney announced The Disney Skyliner, it was perhaps their worst kept secret ever because it was already under construction.

Disney tolerates failure but learns from it and makes appropriate adjustments.

Walt was constantly told that his ideas would never work: people would never sit through an full-length animated film, his idea of family theme parks would never attract guests, and an animated mouse would fail because mice were scary.

Walt knew that just because it hadn’t been done before didn’t mean it was impossible.

Disney always believed in himself and his ideas even if he wasn’t always able to convince those around him.

As a result, Walt had to invent things to make his ideas a reality. For instance, he created the first audio-animatronics after seeing a moving bird in a toy store.

In modern times, we see this in the theme parks. For example, Epcot Imagineers wanted to create a hang gliding attraction, but the structure necessary to make the attraction work hadn’t been created. Exhausted and defeated, the team went home for the holidays. A son of one of the Imagineer’s got an erector set for Christmas, and his father found inspiration for creating the structure. He returned with a fully functional erector set version of what would become Soarin‘, which is still one of the most popular attractions in all of Walt Disney World.

Disneyland was touch and go during construction. After a few years, Walt noticed that many of his guests were from west of the Mississippi and decided that he needed to find a way to attract guests from the east coast. After years of planning, Disney World was born and four more international parks after that including Paris, Tokyo, Hong Kong, and Shanghai. Disney also offers other destinations like Disney Cruise Line, Aulani in Hawaii, and Adventures by Disney.

Look at Disney World alone. Within the resort are dozens of Disney resort hotels, a variety of dining options, two water parks, two miniature golf courses, a PGA golf course, and four theme parks. That in itself is an empire, and many guests never leave the resort once they arrive. In fact, Disney’s goal from the early days was to eliminate the need for guests to travel off property.

Walt never gave up on something he wanted regardless of how many times he was told “no”. He was fired from his first job at his local newspaper for not being creative enough. After he became successful, he bought the newspaper.

Also, Walt worked for more than a decade and a half to get the rights to make Mary Poppins, which became his favorite movie he ever created. His relationship with P.L Travers, creator of the book series by the same name, was so interested that it was created into a movie. Reports say that Travers turned Disney down more than 300 times.

Regardless of how many times he faltered, he always bounced back quickly from unfortunate circumstances.

When Disney’s Animal Kingdom started opening for nighttime hours, many people said it would never work because the animals had to be taken off display at night. Now, Kilimanjaro Safaris is a favorite nighttime attraction, and Pandora, a project which was delayed several times, keeps guests entertained well into the evening.

It’s as important to be inspired as it is to be inspirational. Sometimes, inspiration is found in the most unexpected places. His office in Kansas City, which also functioned as his home for a brief period, was infested with mice. Not coincidentally, Mickey Mouse, a mouse, was inspired by real mice, and the mice that gathered in his trashcan inspired him to create Steamboat Willie.

Walt Disney’s life has inspired many people, as have the parks his company built.  They are places where dreams really do come true.

What inspires you most about Walt Disney, the man?