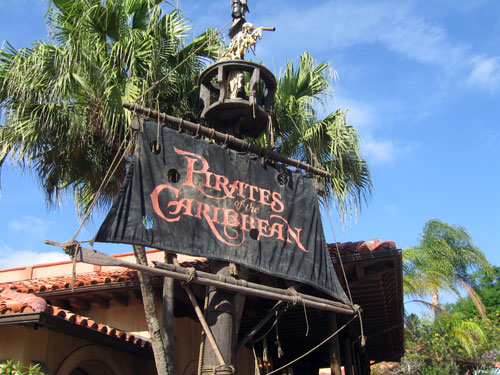 Smell is a very strong sense. In fact, psychologists have linked scents to memories and emotions even years after the experience. Disney Imagineers are very creative and intelligent, and they know how strong a smell can be. Therefore, they’ve provided lots of opportunities for guests to link smells to certain attractions.

We might not notice all the smells in the attractions, but some are more obvious than others,.

Let’s take a look (a sniff?) at ten of the best scents of Disney World!

10. Pirates of the Caribbean

Pirates Of The Caribbean in Magic Kingdom‘s Adventureland has a special scent. It sounds weird, but the musty smell of the water makes a big impression. I’m not sure if this one is on purpose or if it’s just what dirty boat water smells like, but either way it reminds me of my rides on this adventure with Captain Jack.

Ellen’s Energy Adventure in the Universe Of Energy Pavilion in Epcot‘s Future World has a similar smell. Many people describe it as musty, but I actually think it smells very purified like fresh oxygen being pumped in.

The scene in Spaceship Earth that depicts Rome burning also has a unique scent. I hate to think of all those burning books, but this smell is almost as good as a fall campfire!

Journey Into Imagination in Epcot has many scents including a flowery scent that is reportedly called “morning mist,” though I’ve never been able to find this bottled. There is also a terrible skunk smell that accompanies the appearance of the animal. A scent doesn’t have to be good to remind you of an experience!

Many resort lobbies have a special scent, but the Deluxe resorts are probably the best and most noticeable.

I have a special place in my heart for Disney’s Polynesian Village lobby, which always smells like fresh water despite the fact that the water feature was removed in the renovation.

Disney’s Grand Floridian Resort has a floral scent that is appropriately Florida and quite elegant. Both Disney’s Yacht Club Resort and Disney’s Wilderness Lodge have masculine scents, and Disney’s Contemporary Resort somehow smells modern. I can’t explain that one, but it proves that our sense of smell is vaster than our vocabulary!

While I can’t name many of the other scents, I can clearly identify and name the scent of Norway in World Showcase.

It’s a perfume called Laila, and it has a crisp, clean, floral scent that is amazing! It’s pretty expensive in Disney World- no surprise there- but it’s much more affordable on Amazon! If this is your scent, don’t think you can only buy it in Disney.

If you’ve never used the soaps in Disney World Resort Hotel rooms, you’re doing yourself a disservice. The shampoo, conditioner, and body soap smell amazing, and they create a smell for your trip. I love to hide the soap in my luggage and get new soap from Mousekeeping every day. Admit it – you do that, too…

If you really like this soap but you can’t afford to travel to Disney World every time you need a new bottle, you should know that you can buy the H2O soap line on Amazon as well in much larger quantities than are available in Disney.

This is one of my favorite scents in Disney World. As soon as I enter Magic Kingdom and go under the railroad bridge, the curtain is pulled back on Main Street USA and the scents and sights always overwhelm me.

Some people say that the smell of candy and popcorn is piped in, but I don’t think this is true. The Main Street Bakery and Main Street Confectionary make their own snacks every day, and popcorn is popped fresh in the parks as well. I’m sure this smell is authentic and really from the food itself.

Mickey’s Philharmagic is a 4D theater show with eye-popping effects and a few enjoyable scents. This attraction makes me feel so nostalgic for the Disney classics, and the apple pie scent makes me nostalgic for my childhood when my grandmother used to bake dozens of pies for Thanksgiving every year.

By far, the best olfactory experience in all of Disney World is Soarin‘.

Soarin’ Over California glided us over orange groves, pines, and oceans. I literally would breathe in as long as possible to get as much of these scents as I could. It was an awesome experience, and I didn’t think it could be matched.

But I was wrong. Soarin’ Around the World is indeed a contender in this race, and dare I say the potential winner. The new scents include fresh cut roses over India’s Taj Mahal, grass over the African plains, and the South Pacific ocean breeze. These fragrances are incredible. It could be because they are new and different, but I really like them.

I do kind of miss the orange groves though.