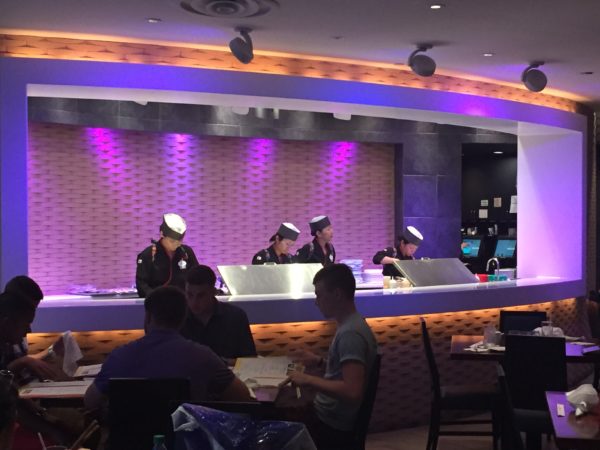 The food in Disney World is far more than “theme park food”, though you can find traditional hot dogs, burgers, and chicken fingers if that’s what you’re looking for.

Disney strives to create good food that is healthy, enjoyable, and appropriately themed.

Sushi is a Japanese dish prepared starting with rice as a base then adding various ingredients including vegetables, sometimes tropical fruits, and most commonly raw seafood.

Let’s take a look at the top seven sushi spots, in no particular order, in Disney World.

Kimonos is a Japanese restaurant located in the Walt Disney World Swan Hotel. It is known for offering one of the largest selections of sushi in the resort with seven cooked sushi rolls, like the Dancing Eel Roll, and ten raw sushi rolls, like the signature Kimonos Roll, and was voted Orlando’s Sentinel’s Critic’s Choice for best sushi in Orlando.

From tempura shrimp to kobe beef, the quality of the sushi here is top notch. But that’s not the only thing that’s impressive about this restaurant. The atmosphere is elegant with tasteful color and complimented by dark teak wood.

You can even watch the sushi chefs prepare the food at the sushi bar.

As you listen to the nightly karaoke, enjoy hot to chilled sake, plum wine, beer, and fruity specialty cocktails.

This restaurant is only open for dinner, and meals cost between $15 and $34.99. Kimonos does not accept the Disney Dining Plan.

Morimoto Asia is located on The Landing area of Disney Springs. This modern Pan-Asian restaurant is part of Disney’s Signature Dining Restaurants, open for lunch, dinner, and late night dining plus a lounge for drinks and small plates.

They serve lots of variety from spicy garlic chicken wings and tuna to salads and desserts, but what they’re really known for is their sushi.

The sushi rolls are served during all meal periods and in the lounge, although the selection may vary with the widest selection being available at lunch. Options include spicy tuna, spicy salmon, eel and avocado, spicy yellowtail, Shrimp Tempura, Spider, California, and Vegetable.

Splitsville is Disney World’s bowling alley, though it’s quite luxurious. If all that bowling makes you hungry, head over to the Splitsville Dining Room on Disney Springs’ West Side whether it’s lunch time, dinner time, or late night.

If sushi is what you’re craving, you’ll only find it at lunch and dinnertime. There are many more options here like The Alberto (no rice, just lean protein and veggies), Crouching Dragon (shrimp, asparagus, avocado, spicy krab, eel sauce, spicy mayo and sriracha), or the Fantasy Roll (described as the sushi dream come true).

Prices range from $11 for the California Roll to $18 for the Fantasy Roll at this themed dining restaurant. Dining Plans are accepted.

The California Grill at Disney’s Contemporary Resort Hotel is situated on the 15th floor providing excellent views of Magic Kingdom and Cinderella Castle. It is inspired by the Pacific Coast and has won many awards.

If you get tired of looking at the outside vista (yea, right), turn your eyes to the exciting onstage kitchen where chefs use fresh, seasonal ingredients to prepare everything from goat cheese ravioli to beef filets and yes, sushi!

As one of Disney’s top rated Signature Dining restaurants, it’s pretty pricey with the sushi costing around $25, but you won’t be disappointed. Try Tuna Three Ways, the Lobster Roll, the California Combination Roll, Sashimi, the Spicy Kazan Roll, or the Truffle-scented Tofu Roll for the vegetarians.

The best part about dining here is that you can see the Happily Ever After fireworks show. If you’re not dining during the fireworks, just return with your receipt from you meal on the same day, and get access to the observation deck where you’ll find some of the most unique vantage points for the fireworks in all of Disney World.

Kona Island is a neat little quick-service bar area on the upper level of the main lodge in Disney’s Polynesian Village Resort. It’s a favorite place to stop when visiting the Hawaiian-themed resort because it overlooks the lower level and is right next to the monorail stop.

In the mornings, this is a great spot to get coffee and pastries, lunch is a variety of small plates, but in the evenings, it transforms into a sushi bar!

There are sushi samplers, the seasonal sushi appetizer, which is the chef’s special of the day, and traditional sushi rolls like the Vegetable Nigiri and the California roll. The Kona Sampler is the signature dish and it comes in small and large.

Most dishes here are under $14.99, but the sushi is a bit more than that with prices between $13 and $24. However, the more expensive dishes are certainly large enough to share.

Sure, the Kona Café nearby is great, but this is such a fun and excellently themed little spot. It just feels like Hawaii!

Many people may not consider Frushi “real” sushi, but we will include it anway.

If you get to visit Epcot during the International Flower and Garden Show, stop by the World Showcase Market in Japan and pick up this sweet treat. It looks like sushi, but it’s actually made from fruit while still using the traditional rice base. The strawberries, cantaloupe, and pineapple is wrapped in the sushi rice then topped with toasted coconut for garnish. It’s drizzled with some raspberry syrup on the plate and whipped cream on the side.

If you think you don’t like sushi, you’ve never tried frushi!

Teppan is Japanese for “iron plate”, and Edo was a time period in Japan between the early 1600s and the late 1800s characterized by economic growth, a stable population, and an enjoyment of the arts and culture.

Teppan Edo, the restaurant in the Japan Pavilion in World Showcase is a teppanyaki-style restaurant where the teppan chefs grill steak, chicken, seafood, and vegetables right in front of you. The restaurant also serves udon noodles and steamed rice.

This themed dining restaurant also serves sushi for lunch and dinner! There aren’t too many sushi options, but they do have a volcano roll (a grilled California roll topped with shrimp, scallops, and volcano sauce), a spicy salmon tartare roll (in a cucumber, avocado, and seaweed wrap), a Shrimp Tempura Roll (in a cucumber and seawood wrap). Each of these dishes is eight pieces of sushi, or you can get the sushi sampler, which is two pieces of spicy roll, two California rolls, and three pieces of nigiri.

Prices for the sushi range between $15 and $18 and dining plans are accepted.

If you’re thinking that there are a lot of Japanese restaurants on the list, you’d be right. Disney likes to keep dining authentic, and sushi is as authentically Japanese as it gets.

Katsura Grill is different from Teppan Edo. Teppan Edo is exciting and fast paced where Katsura is calm and serene. If you don’t venture deep into the Japan pavilion, you’ll never even find Katsura Grill. It is nestled among the trees, and with indoor and outdoor seating, you can enjoy your food in whatever atmosphere you like. While you dine, listen for the taiko drums off in the distance then go find the source of the drumming and watch them for a while. They’re quite entertaining.

The Kabuki Café is a stop along the promenade in the Japanese Pavilion, but it only serves snacks. This quick-service dining location is mostly known for their Japanese shaved ice available in Rainbow, Strawberry, Melon, Cherry, and Tangerine. This kakigori, as it’s called, also comes in a version with sweet milk. They also sell sake mist shaved ices in blood orange, chocolate cherry, or coffee.

Kabuki café, although not known for it, also serves sushi. If you need a sushi fix and you don’t want to take a lot of time, this is the place for you. You can get a California roll or a combo with the unique HAKO style sushi. HAKO sushi is “box style”; instead of being wrapped, it’s stacked. This is one of the only placed in Disney World that serves sushi prepared this way.

This is also some of the most affordable sushi in Disney World at just $5 a serving. However, Kabuki does not accept the Disney Dining Plan.

Tokyo Dining is our last sushi stop, and it should come as no surprise that it’s also in Japan. It’s another themed dining restaurant that is a “true cultural experience.” Step into modern Tokyo while embracing traditional Japanese hospitality.

Tokyo Dining boasts, possibly, the largest selection of sushi and sashimi available at any one place in Disney World. There are three sashimi dishes including a fresh sashimi sampler, nine Nigiri sushi options like tuna, shrimp, salmon, crab, yellowtail, eel, seabream, scallop, or omakase nigiri, which is a sampler of each. Finally, there are eight sushi roll dishes including a spicy crunchy roll, a pagoda roll, a dragon monster roll, a firecracker roll, and a vegetable roll.

One of the coolest traits of Tokyo Dining is that it provides excellent viewing for IllumiNations: Reflections of Earth from the balcony. If you aren’t dining during the fireworks show, you can still get an impressive view of the World Showcase Lagoon.

Do you get sushi in Disney World?  Where?