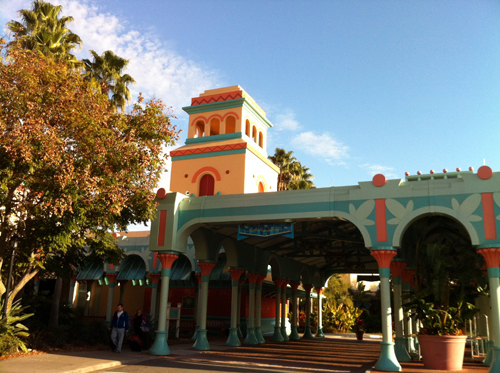 Saludos Amigos! As you plan your next Walt Disney World vacation, one of the biggest decisions you will make is where to stay. One of those options is Disney’s Coronado Springs Resort (CSR). Not long ago, guidebooks and websites gave this resort mediocre reviews at best. Common complaints were the lackluster food service and the “convention” atmosphere. In a very short time, however, there have been significant changes made, and many former critics are now changing their opinion of this resort! Perhaps due to Coronado’s large capacity, its relative obscurity compared to other Disney resorts, and its inclusion in various Disney promotions, more and more people are finding their way to CSR and falling in love with it.

CSR is a convention resort so you will likely see people in their business attire adorned with corporate lanyards while you are there. The convention meeting spaces, however, are not in the path of travel for the average resort guest, and many convention-goers are day guests who are not staying on-site. Therefore it is highly unlikely that the convention aspect of the resort will impact you or the enjoyment of your stay at Coronado. What will impact you and the enjoyment of your stay (in a positive way!), however, are these six things I am sure you will love at CSR.

Coronado Springs draws its name and inspiration from the Spanish explorer Francisco Vazquez de Coronado who explored much of Mexico and the American Southwest in the sixteenth century.

The resort is laid out in three villages or settlements situated around a beautiful central lake (Lago Dorado). Each village is inspired by a region explored that Coronado explored.

The Casitas village is architecturally reminiscent of the brightly colored Spanish architecture one may find in Mexico’s oldest cities. The main entrance, lobby, and dining options of CSR are adjacent to the Casitas in the unimaginatively named “El Centro” (“The Center”). Because of its proximity to El Centro, Casitas village is home to the resort’s preferred rooms.

The Cabanas village is themed to reflect the laid back feel of Mexico’s beaches. On the edge of Lago Dorado, in front of the Cabanas, there is a wide stretch of soft, white, sandy beach with several hammocks for relaxing. If you desire to be equidistant from El Centro and the main pool, Cabanas is your best option.

Most remotely situated is the Ranchos village, inspired by the American Southwest. Compensating for its distance from El Centro are the relative serenity of the village and the immersive beauty of its desert resort theme.

Each village has its own advantages, so there really is not a “bad” place to stay at CSR. Whichever village you call home during your stay, make sure to take time to explore the whole resort as you trace the footsteps of Coronado’s explorations.

At any Disney resort, the feature pool is always a headliner attraction, and CSR is no exception. The Dig Site places guests in the middle of an archaeological expedition.

The center of focus at the Dig Site is a five-story-tall reproduction of a Mayan pyramid inspired by Chichen Itza on Mexico’s Yucatan Peninsula. A waterfall flows down the front of the pyramid into the over 10,000 square-foot Lost City of Cibola pool. Around the back of the pyramid, one climbs the stairs to the top of a 123-foot twisting water-slide. As you careen down the slide, there is a surprise waiting for you! A jaguar lurks over top of the slide, spewing a stream of water at those who pass beneath it. Adjacent to the pool are a children’s pool and the largest hot tub on Disney property with room for 22 people!

The Dig Site is also home to the Explorer’s Playground for the little ones, a beach volleyball court, a fire pit for evening activities, and a nightly poolside Disney movie. Throughout the day, Disney Recreation Cast Members are on hand to provide plenty of interactive fun and games for all.

If you are in the mood for a quieter and more relaxing swim, the three resort villages each have their own leisure pools.

CSR has more dining options than any other moderate resort and more than several deluxe resorts! Don’t be fooled by outdated reviews of CSR’s restaurants because more recent reviews consistently praise the quality of the food and service.

El Centro is home to two table-service restaurants, a quick-service restaurant, a “grab-and-go” market, and a lounge. The signature dining option at CSR is the increasingly popular Maya Grill. From Tex-Mex traditional dishes to unique options with Southwestern flare, Maya Grill offers some of the best Mexican-inspired food anywhere on Disney property. While reservations are not always necessary, they are recommended in case there is a large convention going on at the resort.

Just outside the Maya Grill is the Pepper Market, one of the most festive quick-service restaurants at Walt Disney World. Deli-style sandwiches, burgers (including the unique Azteca and Texas Bacon Burgers), pizza, soup and salad, and traditional Mexican fare are offered at Pepper Market’s stations.

Across the corridor from Pepper Market, is Las Ventanas. It is easy to walk right past, but that would be a mistake. A hidden gem among resort dining options, Las Ventanas has recently expanded its hours and offerings. It serves up what is rapidly becoming recognized as Disney’s best burgers in addition to a number special dishes.

Adjacent to Las Ventanas is Rix Lounge, known primarily as a nightlife spot serving up cocktails to resort and convention guests but offering a small variety of traditional bar-food as well. Just around the corner is Café Rix, which serves baked goods, gelato, specialty coffees, and a variety of “grab-and-go options.” Just outside of El Centro, overlooking Lago Dorado, is the Laguna Bar, offering beverages only.

At the Dig Site, Siestas Cantina is more than just a pool bar! Beginning at 7 AM with a limited breakfast menu and extending through 9 PM with lunch and dinner options of tacos and other simple meal choices, Siestas offers those staying in the more remote areas of the resort a more convenient option for a quick meal.

The resort gift shop, Panchito’s in El Centro, also has a limited selection of grocery items available for purchase at the rear of the store.

In addition to these many options, room service is available for breakfast and dinner. With options like these, it is certain that no guest will go hungry while staying at CSR!

From the beauty of the Lago Dorado, to the lush vegetation, to the Latin American music that fills the air around the resort, there is an immersive atmosphere at CSR that really carries you away. Even though Coronado Springs places you at the center of the Walt Disney World Resort, you can feel as though you are miles away from it all.

Few resorts offer as scenic a place to walk or run as CSR. The path around Lago Dorado is three-quarters of a mile, but this path can extend to over a mile if you venture out through the resort villages.

A wooden bridge over Lago Dorado from the Dig Site to El Centro provides beautiful views of the entire resort, and a glimpse of scores of fish, turtles, and the occasional alligator.

From the bustling activity of El Centro to the beachside hammocks of the Cabanas, CSR’s atmosphere is always just right for a fiesta or a siesta.

One of the most frequent complaints heard about some Disney resorts is the absence of Disney characters and iconic images. It is said about CSR, too. If one takes the time to notice, however, those Disney touches are scattered around the resort in remarkably subtle ways.

Aside from Epcot’s Gran Fiesta tour, the lovable Three Caballeros are hard to find anywhere in Walt Disney World; that is, unless you are at CSR. Donald, Panchito, and José (sometimes called Joe) Carioca can be found in topiary form right outside of El Centro. Not only this, but Panchito is also honored by having the resort gift shop (one of the largest at any Disney Resort) named for him. As you walk into Panchito’s, you are greeted by Burrito, the lovable flying donkey from “The Flying Gauchito” segment of the Three Caballeros film. Keep your eye out for José while you are there also, but you better look up.

If you are a “Hidden Mickey” hunter, they are everywhere at CSR. When we say “everywhere,” this is especially true at Rix Lounge where the walls are covered with them! That’s the only spoiler I’ll reveal here. The thrill is in the hunt. How many can you find?

Compared to the other moderate resorts, the amenities offered at Coronado Springs are a significant step up coming close to what can be found at Deluxe Resorts. For this reason, some have called it a “moderate-plus” and others a “deluxe-light.” I’ll call it a “mod-luxe” resort.

With seven restaurants, there are more dining options at CSR than at any other moderate resort and even some deluxe resorts. CSR also has a fitness room, a salon, and a day spa that rival those of the deluxe resorts. In the Cabanas village of the resort, a special category of rooms called “Business Class” offer guests benefits only found in club level accommodations of deluxe resorts. The most notable and popular of these benefits is a complimentary continental breakfast, and an evening offering of complimentary snacks and beverages in the Coconino Lounge within the Cabanas village area.

Are you a fan of Disney’s Coronado Springs Resort?