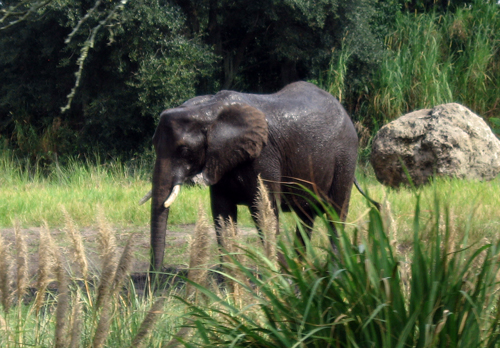 Since Disney announced that Pandora: The Land of Avatar would be coming to Animal Kingdom and bringing with it new attractions and even a new nighttime spectacular show, guests have been waiting with bated breath for the changes. This may come at the cost of overlooking the great things that Disney’s Animal Kingdom already has to offer!

Let’s take a look at six fun things you can experience in the Africa section of Disney’s Animal Kingdom today:

Anyone who knows anything about Walt Disney the man knows that he loved trains. He insisted that rail transportation be included in Disneyland, and the tradition was carried over to Walt Disney World but almost exclusively in Magic Kingdom and the monorail. Almost.

There is one other rail system in Walt Disney, and it is located in Africa in Animal Kingdom. The Wildlife Express Train travels seven minutes from Harambe Village to Conservation Station and five minutes back from the Conservation Station to Harambe Village. On the outbound trip, riders can see backlot areas including the Rhino and Elephant holding areas. Feel free to ride round trip if you don’t want to go to Rafiki’s Planet Watch, but guests of all ages will love how close you can get to live animals in this area.

Tusker House is one of three table-service restaurants in Animal Kingdom and the only one to offer a character meal. The meals include Donald’s Breakfast Safari, Donald’s Lunch Safari, and the recently added Donald’s Dinner Safari. Are you noticing a theme? You’re almost guaranteed to see Donald Duck! Joining him may be Daisy, Goofy, Pluto, and sometimes the Mouse himself! Guests will find standard and adventurous fare including ham, eggs, Mickey Waffles, deli meats, corn dog nuggets, Spiced Vegetable Tofu, Mango Chutney, and Saffron-infused root vegetables. What’s more, the newly added Dinner Safari hints at the extended park hours that will come with the late-night attractions of Pandora.

4. Festival of the Lion King

Festival of the Lion King has recently gotten a huge makeover. With the other construction going on, this show was forced into a new theater, which brings the characters and the show into a more fitting location and allows for more room for the acrobatics, stilt walkers, and overall fun of this show. Don’t miss it!

Pangani Forest is a 3/8-mile hiking trail on which guests can see hippos, gorillas, okapis, monkeys, and meerkats. There are also about two dozen birds in the aviary section. If this isn’t enough for you, grab your Wilderness Scout Field Guide and earn your badges in Birding and Hiking.

Kilimanjaro Safaris is one of the most popular attractions in all of Walt Disney. Even though Pandora: The Land of Avatar will be amazing, the CGI animals simply can’t compare to the close encounters and photo ops on the Safari. Keep an eye out for lions, crocodiles, elephants, hippopotamuses, flamingos, giraffes, zebras, rhinos, gazelles, and ostriches. Get your camera ready! Your guide will tell you what to look for, but you never know when or where an animal will be.

Are you a fan of Animal Kingdom’s Africa?
Leave your comments below.