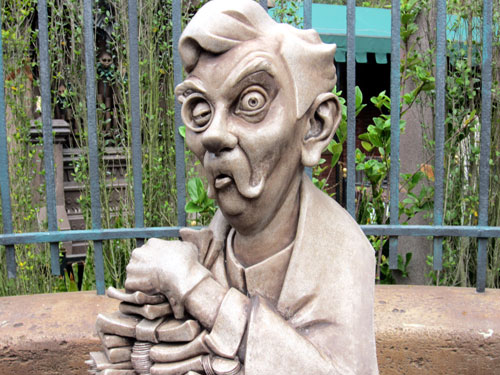 Let’s face it – nobody enjoys waiting in lines.

Whether it is at the grocery store checkout counter, on the phone waiting for a company representative, or at Disney World, it seems we all want to skip the wait and get on to the good stuff.

The art and science of waiting is such a big deal that businesses spend billions of dollars studying the problem and making changes to reduce how much time we wait. Disney is implementing its massive MyMagic+ system, at a cost of more than $1 billion, in part to help reduce our wait times.

Even though we want to wait less, Disney Imagineers have known all along that the wait can be part of the story, if not actually part of the fun. It’s why Disney has spent plenty of time and money ever since the beginning at Disneyland to make sure that when we do have to wait it is entertaining and sets the stage for the main event: the attraction that is to come.

Let’s take a look at the seven top attraction queues at Disney World:

Space Mountain is a popular attraction and can often have quite a long standby wait. Fortunately Disney’s got you covered – literally, in a long, cool, dark tunnel that takes you to the loading area. As you wait in line, you can play simple but fun video games that line the walls along the way in this Magic Kingdom classic.

Imagineers seem to love the Haunted Mansion. It gets plenty of maintenance and occasional upgrades. Still, it retains its essence. One of the last major overhauls added the “interactive graveyard” into the queue. What, you’ve never heard of an interactive graveyard? It’s probably a good thing we don’t run into these back in the real world. You can read the inscriptions that tell a riddle on some busts, push in books that pop out, play the keys on a pipe organ, or help a dearly departed poet who died from writer’s block. These are creative and fun diversions that help you pass the time in no time.

3 – Under the Sea – Journey of the Little Mermaid

Disney pulled out all the stops for Under The Sea. As you approach the attraction you can take in the amazing architecture of Prince Eric’s castle and enjoy the mist of a rushing waterfall. Check out the rockwork and all kinds of things that have floated to the bottom of the sea. Interact with little blue crabs who need a hand, or a pincher, in sorting out their treasures. And listen up as the slightly confounded Scuttle the sea gull tells you a bit about his life.

4 – The Seas with Nemo and Friends

It’s a long queue and not a very high tech queue, but Disney makes the wait for The Seas much more interesting by adding in plenty of sea-themed items to check out along the way. You will encounter plenty of tributes to Finding Nemo as well as the attraction which inhabited the space before Nemo arrived in Epcot – The Living Seas.

What would the world look like if you were the size of a toy? You can find out in the queue for the ever-popular Toy Story Mania. It’s fun to recognize all the toys of yesteryear that are sprinkled around the queue in larger-than-life size. As you get close to the loading area, you can enjoy a huge animatronic Mr. Potato Head who is wise cracking and fun.

This could well be one of the best attraction queues ever. It truly looks like you have stepped back into the hay day of Hollywood sometime shortly after 1917 when the hotel was built. Everything looks like a glamorous hotel would, except that it is covered in cobwebs. After you exit the library and enter the basement, which is complete with boilers aplenty, the anticipation builds for the actual ride. The Tower of Terror is Disney theming at its best.

I’ve never been to Napal but if I ever get there I fully expect it will look like the queue for Expedition Everest. In fact, rumor has it that Disney Imagineers brought back around 8,000 items from Nepal that now adorn the queue. You get to meander past ancient temples, walk through a Yeti museum, and check out a base camp before your board your ride vehicle. The detail is amazing and it truly sets the stage for the adventure to come. Much like the queue for the Tower of Terror, this queue is one of the best.

What is your favorite attraction queue at Disney World?