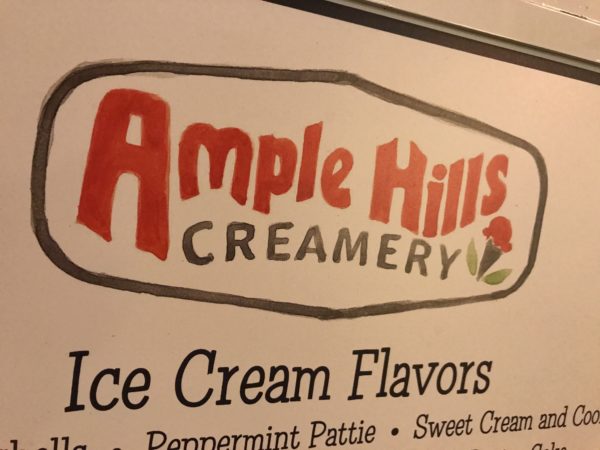 Top Ten Places to Get Ice Cream in Disney World

Unless you visit Disney World in January or February, you can pretty much bet that it’s going to be pretty warm. Even in the winter, cool mornings can give way to hot days. What better way to cool off than with some delicious ice cream?

There are lots of places to get ice cream in Disney World, but we’re going to take a look at the ten best places!

Ghirardelli in Disney Springs has been around for quite a long time and it even survived the re-theming that took place over the last several years – and for good reason.

Vivoli is a world famous Italian gelato store in Florence that has been in business for over 80 years. Visitors of this location say it’s a must stop when in Italy. Fortunately, Disney World has made it possible for us to try this world-famous gelato without stamping our passports.

Instead, head over to The Landing in Disney Springs where you’ll find Vivoli II Gelato. It’s the same famous recipe without the cross-Atlantic airfare.

There are twelve flavors including everything from Caffe (fresh espresso coffee) to Cocco (freshly shredded coconut) and you can choose any of these to be served in a cup, cone, or shake form.

Vivoli Il also has sorbetto and affogato, which is a hallowed-out scoop of gelato filled with Italian espresso. As the gelato melts, the flavors meld together to create the perfect blend of hot and cold, bitter and sweet.

Landscape of Flavors in Disney’s Art of Animation Resort may not be as high class as Vivoli Il, but they serve up some amazing gelato this side of the pond plus they have some yummy toppings.

Tucked in a corner by the refrigerated Grab and Go coolers is an ice cream bar that serves up four or five flavors per day. Just tell the Cast Member what flavor you want and what toppings you want, and they’ll fold your toppings into the gelato making a perfect, customized treat that is both fun and delicious

Plaza Ice Cream Parlor on Magic Kingdom‘s Main Street USA is quintessential Disney. It is as close to what Walt envisioned as we can get as we enjoy a sundae while we look out over the hub and onto Cinderella Castle.

The ice cream itself really isn’t that special; the nostalgia here is what’s to be celebrated. Disney did, however, recently announce a specialty breakfast item in the form of a doughnut sundae. It’s a glazed doughnut with cinnamon-apple topping, and a scoop of ice cream, topped with some whipped cream, chocolate chips, peanut butter chips, hot fudge, milk chocolate Mickey ears, and a cherry. Now that’s indulgence!

Beaches and Cream on Disney’s Boardwalk near Disney’s Beach Club Resort also made my top five awesome ice cream stores list a while back. It’s an old favorite, and it’s known for serving up one of Disney’s most popular food challenges: The Kitchen Sink! This gigantic treat with 10 scoops of ice cream in varying flavors, tons of toppings, and a whole can of whipped cream is enough to send the whole family into a sugar rush.

Don’t worry. If you’re looking for something a little more manageable, they have that, too. Get a scoop or two in a cone or cup. If you’re not staying at the Beach Club, just take the International Gateway out of World Showcase and walk over. It’s less than a mile!

The 50’s Prime Time Café in Disney’s Hollywood Studios is known for it’s home-style food with waitresses who make sure that you finish every last bit of your vegetables. They’re not really known for their desserts and much less their ice cream, but 50’s Prime time has one of the most unique treats in all of Disney World.

The Peanut Butter and Jelly Milkshake combines the saltiness of peanut butter, the sweetness of jelly, and the coldness of ice cream to make a weird but super tasty shake. For adults, add a shot of Chambord and Godiva for an additional punch of sweetness.

Pineapple Lanai is a quick-service location at Disney’s Polynesian Resort. It’s a short monorail ride away from Magic Kingdom, and it’s totally worth it. Sure, you could stay in the park and stop by Sunshine Tree Terrace, but why not skip the lines and check out one of the Disney resort hotels. It’s a win-win.

Pineapple Lanai serves up one of the most well known cool treats in all of Disney World: The Dole Whip. It’s dairy-free, so it’s not really ice cream, but it’s still cold, creamy, and tangy. The pineapple soft-serve is just what you need to cool off on a hot day. Plus, if you visited Disney World and you didn’t get a Dole Whip, did you really visit Disney World?

If you can’t or don’t want to leave the park, Aloha Isle or Sunshine Tree Terrace in Adventureland is your next best stop.

Another must-eat treat for me in Disney World is the Mickey Ice Cream Bar or Sandwich. You can find them at any of the many quick-service carts located all around Disney World in every theme park, both water parks, and the shopping areas.

This snack brings back so many memories of Disney vacations through the years, and they’re really a nostalgic thing just like the Plaza Ice Cream Parlor. They’re messy, though, especially on hot days, so get some extra napkins!

L’Artisan des Glaces in the France Pavilion of World Showcase serves some of the best ice cream in all of Disney World, and it’s often made number one on similar lists. The ice cream is made fresh daily so it’s flavorful and creamy, and it comes in many different flavors including salted caramel, coco-white chocolate, and classic flavors like vanilla and chocolate.

For an extra treat, order the Croque Glace, which is a scoop of ice cream between a buttery brioche bun with chocolate or caramel sauce. The French really know how to do dessert!

Ample Hills Creamery is one of the newcomers to Disney World. They started in Brooklyn in 2011 and have now expanded to six locations across the New York Boroughs.

You can get your ice cream in a cup or choose from a variety of cones including waffle, M&M, Chocolate Chip, Cake, Pretzel, or Chocolate Cookie cones. You can also get a milkshake or a sundae.

Before you choose, though, make sure you check out the serving sizes. They’re huge, by the way. At a cost of between $5 and $9, it might seem like you’re paying too much for ice cream. However, the large portions and the delicious options will be worth every penny!

Where do you get your favorite ice cream in Disney World?