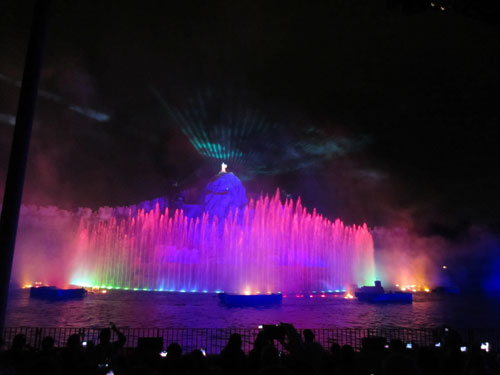 Perhaps more than any other theme park at Walt Disney World, Disney’s Hollywood Studios depends on live shows to provide entertainment. These aren’t attractions with animatronics, but rather shows with real live human beings.

While there are more live entertainment options than what we will cover here, I would like to take a look at the top seven live shows at Disney’s Hollywood Studios:

Please don’t throw a rotten tomato at your computer screen, but I have to be honest and admit that The American Idol Experience is my least favorite live show at Disney’s Hollywood Studios. The production quality of the show is terrific and truly mirrors what you see on television. I also know that many young people with stars in their eyes consider performing in front of an audience to be an out of this world experience. However, for me, the American Idol Experience seems a bit like a high school talent show. You never know what to expect, but usually the performers are still “crafting their skills” if you know what I mean.

Disney is planning to close The American Idol Experience in January, 2015.  If you want your chance at stardom, be sure to plan ahead.

Any time you choose to put little kids up on a stage, you can be guaranteed a good time. They live for the moment and have no problem reacting with their true emotions. The Jedi training Academy combines the unpredictability of little kids with the fun of Star Wars to create a very entertaining show. Yes, I admit that the storyline isn’t the strongest, but the purpose of the show isn’t to relay an intricate tale; the purpose is to see little kids fight Darth Vader! In the end that ends up being a lot of fun.  Be sure to sign up early if you want your child to participate.

While the show is not designed for everyone, those folks it is intended for will love it. If you have a young child who enjoys watching Disney Junior on television, they will be in heaven when they see it come to life in the Disney Junior – Live on Stage show. From the catchy music to the lights, from the fun puppets to the confetti, the show is an interactive barrel of fun designed for little Disney fans. They will love it, and you will enjoy watching them love it.

The roving comedy troops that provide skits on Hollywood Boulevard and Sunset Boulevard include some of the most talented performers in all of Walt Disney World. They can take simple props, an outline of a story, and some willing volunteer guests, and turn it into a bit of live magic. If you have an opportunity to see one of these live shows, be sure to stop for a few minutes and enjoy the fun. It’s truly worth it.

5 – Voyage of the Little Mermaid

The Voyage of the Little Mermaid show has been going strong since 1992 and shows no signs of quitting. Interesting lighting, live actors, and puppetry combine with special effects and music from the movie to take you under the sea. If you enjoyed The Little Mermaid movie in any way, you are sure to enjoy this 15-minute live performance.

6 – Beauty and the Beast

Amazing costumes, talented actors, and an incredible set of music come together to present a Broadway-quality show that retells the story of Beauty and the Beast. Whether you are a fan of the movie or just enjoy live productions, seeing this show should be high on your list of activities at Disney’s Hollywood Studios.

What happens when you combine lighting effects, live actors, and a huge auditorium built around a lagoon? You get a chance to enter into Mickey Mouse’s imagination and experience one of the most creative shows at Disney’s Hollywood Studios. The lines to get into this nighttime spectacular can be very long, so consider booking a dining package that includes a guaranteed admission, showing up well in advance of the show time, or taking in the second showing (if Disney is presenting the show twice in one evening). Fantasmic! is the perfect way to cap off your day at Disney’s Hollywood Studios.

What is your favorite live show at Disney’s Hollywood Studios?