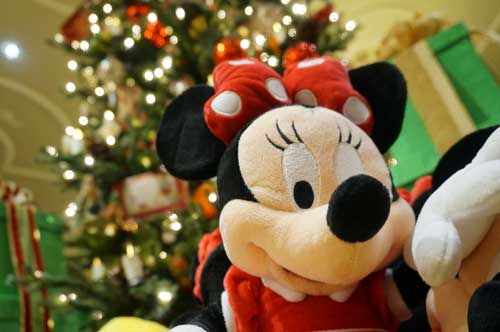 Even though it doesn’t quite feel like it here in the Northeastern United States, it’s mid-December, which means Christmas is just around the corner.

This is the time of year that I look forward to most of all. I get to decorate the Christmas tree, eat cookies for absolutely no reason at all (other than, well, hey, they are in the shape of Santa), and I get to watch all of the greatest Christmas movies and specials with my wife and kids.

Of course, it wouldn’t be Christmas at the Ear To There Travel estate without our favorite type of Christmas movies, so here are the Best Disney Christmas Movies.

Alright, well I’m cheating right off the bat here because this wasn’t originally a Disney special at all! A Muppet Family Christmas was first aired on December 16, 1987 (ah, the 80’s…when Christmastime didn’t start in August!) and it quickly became an instant classic (at least to a then 8 year old me and my 6 year old Muppet-obsessed little brother). This Christmas special has absolutely everything you would want in a Muppet movie: Muppet, Fraggle Rock, & Sesame Street characters, amazingly catchy songs (you will be singing “Pass It On” for a week), and the off-beat one-liners you expect from the Muppets (“Careful of the icy patch!”) The problem with this one is it has become a little bit obscure and hard to find, especially on TV during the holidays. There’s a good amount of DVD copies on Amazon.com & eBay though, and there’s also a few pretty good versions available on YouTube, so if you haven’t seen it, watch it right now (well, as soon as you read the rest of my list!)

3 – Mickey’s Twice Upon A Christmas

I know what you’re thinking: “Hey, what about Mickey’s Once Upon A Christmas? And well, while I like that one as well, Twice has one element that I’m a HUGE fan of in any movie or show, especially when Disney is behind it. This 2004 instant classic contains a segment titled Christmas Maximus, a story about Goofy’s son Max bringing his college girlfriend home for Christmas. Almost the entire segment takes place during the song “Make Me Look Good” (said element!) which is sung from Max’s perspective, where he is pleading with Goofy not to be his goofy self so that he doesn’t embarrass Max in front of the girl (which honestly doesn’t seem like Max but does sound like me when I brought my first girlfriend home!) I’m not going to spoil it for you and tell you how it ends, but it’s a Christmas story so normally they have happy endings. It’s almost Up-like in it’s execution and it always makes it a little dusty in my family room when I watch it with my kids!

Just kidding! I was an infant when this one aired in 1978 and I’ve only managed to sit through bits and pieces of it on YouTube over the years.  From the horrible Wookie costumes to the dance numbers, the ridiculous acting to the fact that Golden Girl Bea Arthur plays a pretty significant role, (I have nothing against Golden Girls, it was a funny show; I just don’t want Dorothy singing in the Mos Eisley Cantina!) it’s just a complete mess from beginning to end! This is a movie about which George Lucas reportedly said, “If I had a sledgehammer, I’d track down every copy of that movie and smash it!” The craziest part is, it is an hour and a half long! Let me know how much of it you can get through. If it’s more than ten minutes, you’ve got me beat!

This time of year I have a few feel-good movies that I absolutely must watch: Home Alone, A Christmas Story, It’s A Wonderful Life, and Mickey’s Christmas Carol. This one premiered in 1983 and I’ve looked forward to watching it ever since I was in kindergarten. I have to be honest here though, Pete as the ghost of Christmas Future scared me half to death when I was a little kid (and still freaks me out a little today; I don’t know how my kids aren’t terrified when he lights the match on Scrooge’s tombstone!) This is kind of embarrassing to admit, but I think Mickey’s Christmas Carol is my all-time favorite adaptation of the classic Charles Dickens story. It’s really funny, a little bit spooky with the ghost of Jacob Marley and the aforementioned scary Pete of Christmas Future, and it’s impossible to not tear up a little bit when Tiny Tim (spoiler alert if you don’t know how A Christmas Carol ends!) notices all of the toys in Scrooge’s bag at the end.

These are just a few of the holiday classics The Mouse has put out in the last 30 years. Disney’s done a wonderful job of creating magic in Christmas movies for decades, and I’m sure I didn’t name some of your favorites. So please tell me, what are YOUR favorite Disney Christmas movies? Maybe you absolutely LOVED the Star Wars Holiday Special and celebrate Life Day (like the Wookies) every year instead of Christmas, Hanukkah or Kwanza? Hey, I’m not here to judge! Please tell me about your favorites in the comments, and I hope you and your family have a wonderful and happy holiday season!

Do you watch any Disney Christmas movies each year?  Which ones?