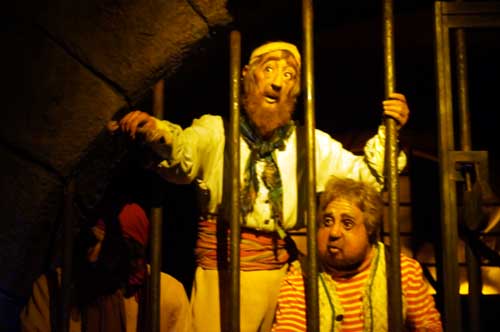 Top Five Ways to get your Pirate Fix at Disney World

Are you tired of hearing about the Disney Princesses? It seems like princesses and activities for girls are all over Disney World, but what about your son? Or what if you little girl prefers pirates over princesses? You’ll have to look a little harder, but you can easily have a pirate-themed vacation with some planning.

Pirate fans will want to jump on board and experience all of these pirate-themed activities at Disney World. From accommodations and attractions to characters, cruises, and activities, your little pirate will be entertained throughout your vacation.

No pirate-themed vacation is complete without accommodations fit for a Captain Jack himself.

The Caribbean Beach Resort, a moderate resort in Disney World, has Pirates Of The Caribbean themed rooms complete with treasure and pirate ship beds. For a deluxe option, check out the Yacht and Beach Club’s Stormalong Bay. The boat-themed area features the Flying Jib Slide. It’s a small slide, but it’s perfect for the little pirate in your family!

The Albatross Treasure Cruise, which departs from the Yacht Club Marina, takes pirates ages 4-12 on a two-hour voyage guided by adult pirates in search of buried treasure. Little pirates get their own pirate gear, and for just $35, the pirate parents can get some alone time! Pirate cruises also leave from the Caribbean Beach Resort, Port Orleans Riverside, and the Grand Floridian.

If meeting a pirate is on your Disney to-do list, check out Disney’s Contemporary Resort’s Pirates and Pals Fireworks Voyage during which you’ll meet Captain Hook, Smee, and Peter Pan himself. You’ll even be treated to popcorn and ice cream, and hot and cold beverages including Pirate Punch. Perhaps the best part of this voyage is the special viewpoint of Wishes Nighttime Spectacular.

Magic Kingdom‘s Adventureland is home to the popular Pirates of the Caribbean ride that has several audio-animatronic versions of Captain Jack Sparrow and tells the story of his antics with the other pirates. This dark boat ride is complete with canon blasts and buried treasure and will delight any pirate fan.

Across from Pirates of the Caribbean, Captain Jack hosts the pirate tutorial during which four lucky audience members learn sword wielding techniques from the Captain himself. The show takes place several times throughout the day, so check the Times Guide or the Disney app for the show times during your vacation.

Besides the Pirate Tutorial and the Pirates and Pals cruise mentioned above, Disney guests can see Hook and Smee in Magic Kingdom’s Festival of Fantasy parade.

Jake from the Never Land Pirates appears during a Character Lunch at Hollywood and Vine in Disney’s Hollywood Studios, and Captain Jack Sparrow meets and greets guests during Mickey’s Not-So-Scary-Halloween Party.

Pirate fans ages three and up can become real pirates at the Pirates League. For around $30, you can get your own pirate name, look, and oath in about an hour. This experience is customizable with additional costumes and accessories all available at an additional cost, of course.

Don’t wander too far after your pirate transformation because guests are invited back for the Pirate Parade at 4:30pm and for Captain Jack’s Pirate Tutorial.

Do you enjoy pirate-themed activities in Disney World?