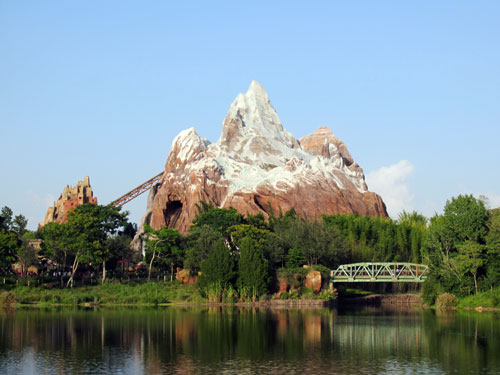 Disney is well-known for its family attractions like It’s a Small World, The Many Adventures of Winnie the Pooh, and the wonderful shows. That doesn’t mean that thrill seekers are left out!

Disney has many attractions for those who like the excitement of coasters.

Mission: Space is a one of a kind attraction not only in Walt Disney World but anywhere in the world! Even the non-spinning Green Team can be too much for some guests. Those who brave the spinning Orange Team are in for a real thrill. When Disney was building the ride, they consulted real-life rocket scientists and NASA astronauts. Some suggest that Mission: Space is as real-life-like as it gets to actually going into space.

For the sake of a top 5 list, I combined the Disney Mountains together.

Splash Mountain often has one of the longest wait-times in Disney, and with good reason. Although this 11-minute ride is mostly spent riding in a log listening to nostalgic Disney music, the 53-foot plunge at the end definitely qualifies this as a thrill ride. Caution: You will get wet!

Space Mountain only moves 27 miles per hour, and there are no loops or big drops, but riders feel like they’re traveling much faster as they blast through the strobe tunnel, worm holes, and into space in a rocket ship. Did you know that the stars are placed in the same patterns as in actual space? Don’t overlook this awesome feat of engineering.

Big Thunder Mountain Railroad is always exciting. It doesn’t have any big drops or loops either, but with its jerks and quick turns, it is quite thrilling and not to be missed!

The Seven Dwarfs Mine Train in the recently opened Fantasyland is quite popular! FastPass+ reservations can fill up as many as 180 days in advance, and wait times can be upwards of 120 minutes, but the wait is worth it! With a small drop right out of the gate, many others to follow, and the swinging mine cars, this is a great thrill ride. Disney even added video equipment, which film you on the ride and upload the video to your magic band. How cool is that?!

Rockin’ Rollercoaster is Disney’s only coaster that goes upside down. Less than three seconds from launch, riders are already traveling at 57 mph and are experiencing 4.5Gs at the first loop. The speed combined with the loud Aerosmith music make this ride a unique and thrilling experience.

This attraction made the Guinness Book of World Records as the most expensive roller coaster in the world. There are no loops and the Yeti isn’t very scary, but the 80-foot drop, a reverse drop, and the broken track are quite thrilling.

What is your favorite thrill ride at Walt Disney World?