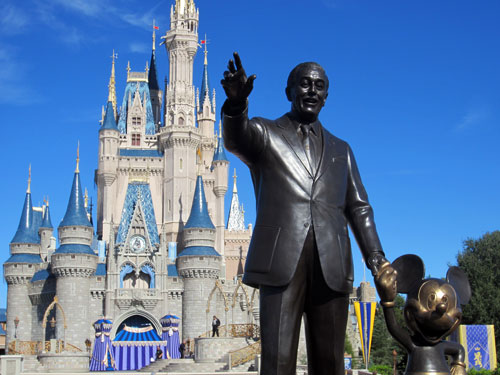 The world’s largest theme parks make the list primarily because of their shear size. With more area in the parks, more guests can visit daily and annually than smaller parks. Plus, with really exciting attractions and new things coming all the time, these parks welcome guests back year after year just to see what’s new.

Let’s take a look at the top five largest theme parks in the world.

Located in Osaka, Japan, this park welcomed 12.7 million visitors in 2015. The Wizarding World of Harry Potter is also the main draw in this park. It’s very much like Universal Studios Orlando, but interestingly there are no on-site hotels. There are, however, 24 partner hotels in close proximity to the park.

Tokyo Disneyland was the first Disney park built outside the US and opened to guests on April 15, 1983. In it’s 32nd year, the park welcomed over 16 million visitors. It is 115 acres and includes seven themed lands including World Bazaar, Adventureland, Westernland, Fantasyland, Tomorrowland, Critter Country, and Mickey’s Toontown all within two parks: Disneyland and DisneySea. There are also several familiar rides like Splash Mountain, Space Mountain, Peter Pan’s Flight, and Dumbo the Flying Elephant. With four Disney resort hotels and many Disney Good Neighbor hotels, there is plenty to do.

The original Disney theme park hosts about 30 million guests annually at its Disneyland and California Adventure theme parks. With shopping and dining in the Downtown Disney area plus three Disney resort hotels, Disneyland guests won’t get bored whether you’re staying for a few days or a week or more. There’s so much history and nostalgia in this park that it can be almost overwhelming.

If you’re a regular World of Walt reader and Walt Disney World is your home park, it should come as no surprise that Walt Disney World ranks as number one in the world for the largest theme parks. After all, it almost always makes the top spot on any theme park ranking list regardless of the topic.

The best part is that everything is in one place. There’s no need for a rental car because Disney provides transportation to and from the resort via Magical Express and also around the resort via buses, water taxis, and the monorail. With world class shopping, dining, attractions, and accommodations, 50 million visitors a year couldn’t possibly be wrong!

Disney World is the biggest park in the world – do you think it is the best?