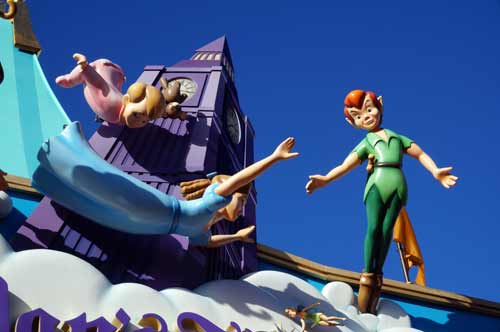 Dark Rides have surprisingly been with us a long time.  The earliest dark ride, A Trip to the Moon, appeared at the 1901 Pan-American Exposition. They were boat rides that carried riders through completely enclosed water canals. In 1928, the Pretzel Amusement Ride Company received a patent for the first single-rail electric dark ride. Futurama, which was part of the 1939 New York World’s Fair, is a track dark ride.

For purposes of this article, we will not include boat rides since there are so many of them at Disney World. Instead, we’ll be using this criteria: A dark ride has a ride vehicle on a track or on wheels that leads riders through an enclosed attraction with strategic, artificial lighting in multiple rooms with scenery, animatronics, special effects, music, narration, and video. Each room is entered through a winding path to create a sense of being transported to another time and place.

There are many attractions at Disney World that fit some of these criteria, but the five listed below are the ones that I feel best fulfill Walt’s intentions for creating his dark rides.

5. Many Adventures of Winnie the Pooh

The Many Adventures of Winnie the Pooh is perhaps the happiest dark ride in Disney World as the classic storybooks come to life in Magic Kingdom’s Fantasyland. Board a giant hunny pot, and travel through the Hundred Acre Wood and A.A. Milne’s colorful illustrations. This ride includes the beloved characters, Gopher, Piglet, Eeyore, Kanga, Roo, Owl, Tigger, and Heffalumps and Woozles.

In the first room, it’s a cold and rainy day in the Hundred Acre Wood, and the hunny pot has been swept up by the wind. The next room encourages riders to bounce with Tigger, then travel into a dream world with the Heffalumps and Woozles. The ride ends with waking up from the dream in the rainy day and a party for Pooh.

Another great part of this attraction is the interactive queue which will keep the little one’s entertained in this sometimes very long wait time. Rabbit’s Garden is a hide-and-seek game complete with a crawl-through tunnel. Next, you can play in the overflowing honey by drawing on the wall. You’ll also meet Piglet and Eeyore in their homes.

Buzz Lightyear’s Space Ranger Spin in Tomorrowland’s South Show Pavilion is a shooting-gallery type dark ride themed after Disney Pixar’s hit movie, Toy Story. Named Disney Magazine’s Reader’s Choice Best Attraction for Young Kids, this interactive shooting game allows participants, who are recruits sent by Star Command, to help defeat the Evil Emperor Zurg who is trying to steal all of the batteries used to power the space vehicles of The Little Green Men (who can be seen in both the movies and the attraction). As always, Disney goes to great lengths to include as many details as possible; since guests are part of the toy world, you can see giant screw heads and a giant toy instruction sheet among other things.

The omnimover ride vehicle features two laser guns, a joystick, and two digital points counters. The end of the ride shows your status in Star Command depending on how many points you racked up. To increase your point value, take advantage of ride stops. This is a great way to really add up the points if stopped for a while, which happens frequently.

Buzz Lightyear wasn’t the first to take flight in this pavilion though. Since 1972, three other rides with five names called the South Show pavilion home. If You Had Wings opened in 1972 and ran until 1987 when Eastern Airlines pulled the sponsorship. At that point, the ride became known as If You Could Fly. When Delta agreed to sponsor a new ride, titled Delta Dream Flight, in 1989, the ride changed configurations too. Delta pulled its sponsorship in 1996 when they decided to sponsor the Summer Olympic games, and the ride was renamed Dream Flight for six months. In June 1996, Take Flight opened with a similar ride construction and ran until January 1998 when Buzz Lightyear arrived. The current attraction is a conglomeration of all of the previous rides, and the speed tunnel is from the original attraction, If You Had Wings. Of course, the theming is all new.

3. Journey of the Little Mermaid

Journey of the Little Mermaid opened on December 6th, 2012, as part of the Fantasyland Expansion and reuses part of 20,000 Leagues Under the Sea as Ariel’s Grotto. Guests enter at low tide through an underwater cave and proceed through winding caverns to get to the loading area. Here, you’ll find a fun, interactive game: a scavenger hunt with Scuttle.

Proceed to the loading area, and you’ll board omnimover vehicles in the shape of large, colorful clamshells. The ride begins with Scuttle telling Ariel’s story, but he eventually decides it’s best to show you. At this point, the clamshells turn backwards, and you’ll float through an underwater world with scenes from the infamous story. The first scene is in Ariel’s Grotto (repurposed from 20,000 Leagues) with Ariel singing Part of Your World and admiring her trinkets. Next, Ursula sings Poor Unfortunate Souls with her pet eels. Then comes the romantic lagoon on which Ariel and Prince Eric appear together in a boat. Sebastian sings Kiss the Girl, and the other fish join in for a musical medley. Keep floating in your clamshell, and you’ll see Ariel and Prince Eric kissing while Ariel’s neck is glowing signifying that her voice has returned (because she found her prince and got him to kiss her). Finally, King Triton (Ariel’s Father), her sea creature friends Sebastian and Flounder, and many other fish celebrate the wedding of the two.

Journey of the Little Mermaid is a newer edition to the Disney Dark Ride family, but it is classic in that it features many scenes that all tie together to tell a story. It is one not to be missed.

The Haunted Mansion is the ultimate dark ride with lots of rooms, a very cool ride vehicle (The Doombuggy), fantastic special effects, and classic animatronic figures.

The Haunted Mansion opened in Disney World on opening day. A version of the ride is present in every other Disney theme park in the world. Walt’s idea for this ride actually began when he hired his first Imagineers, but he didn’t like the idea of an unkempt area to be in his pristine theme park. Eventually, they convinced him that guests would appreciate the theming of the ride and would not be bothered by an area that appeared to be run down.

How does Peter Pan’s Flight make number one on my list when I had so much praise for the Haunted Mansion? Because Peter Pan makes me feel like a kid again.

As you board the pirate ship and travel through London to Neverland, you’ll appreciate the simplicity of the ride while integrating the timeless story. When the ride was updated in 2014, a new interactive queue was installed and includes interactive murals within the Darling Family home. The ride itself hasn’t lost any of its integrity and continues to be a guest favorite.