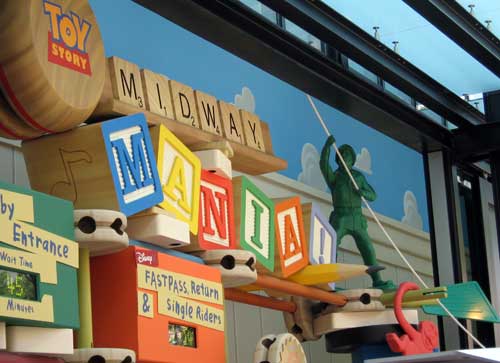 By some estimates, about half of Americans play video games and about 80% of American households have a video game console. It’s a multi-billion dollar industry, so it’s no surprise that Disney capitalizes on this hobby by integrating some of the same technology into its attractions.

Also not surprisingly, these attractions are some of the most popular ones on property.

Are you one of the many millions of Americans who like video games? If so, keep reading! This article is for you!

These arcades have over 1,500 games with something for everyone in the family. From air hockey and pinball to modern interactive games, you’re sure to experience both nostalgia and something new!

This five-story building is home to classic games like Pac-Man and Centipede as well as more modern experiences like the opportunity to build and ride your own rollercoaster. You’ll even find computerized versions of attractions in the parks like Buzz Lightyear’s Astroblasters.

This old-fashioned shootin’ game is themed after a shootout in Tombstone, AZ, in 1850. Gamers shoot at 97 moving and non-moving targets on backdrops of a jail, hotel, bank, and cemetery.

When this arcade opened its doors on the opening day of Magic Kingdom in 1971, the original pellet guns shot real lead pellets at metal targets. In 1982, Disney replaced these guns with infrared guns and an electronic version of the game, which saved Disney thousands of dollars and thousands of gallons of paint since the targets had to be repainted almost nightly.

Buzz Lightyear’s Space Ranger Spin in Magic Kingdom’s Tomorrowland is a shooting-style dark ride that uses an omnimover system to move guests throughout the ride.

The Evil Zurg is threatening to take all of the batteries. Riders are recruited to be part of Star Command to defeat the Evil Zurg. All you have to do is use the joystick on your ride vehicle to aim your astroblaster at targets. Rack up as many points as you can, and find out at the end of the ride what level of Star Command you reached.

Disney’s Hollywood Studios is under major renovation and will even receive a name change at some point. Though Disney Execs are remaining tight-lipped about the details, we do know that many attractions have already closed or will close soon and other attractions will be expanded.

One of the areas that will be added to the new theme park is Toy Story Land, which will be built around the existing Toy Story Midway Mania. This 4D ride uses 3D technology and adds some surprises with air and water effects linked to some targets. It is a very popular ride, which is why it tops our list. Wait times for Toy Story Mania can reach well over an hour, but people don’t seem bothered to wait that long. Perhaps the fun, interactive queue helps. The queue features popular toys including a Candyland box, Viewmaster Discs, and a Scrabble board all in the setting of Andy’s Room.

The ride itself takes guests through five unique rooms with different games while the 20th Century-inspired carnival train ride vehicles keep score. The first room, Hamm and Eggs, allows guests to play a target game with Hamm and Buttercup by throwing hardboiled eggs at barnyard animal targets. The second room is Rex and Trixie’s Dino Darts, which is a balloon pop game. Next is the Green Army Men Shoot Camp. Guests toss baseballs to break plates while being encouraged by the Green Army Men. Fourth is Buzz Lightyear’s Flying Tossers, which is a ring toss game during which guests ring the Little Green Men from the Toy Story movie. Finally, Woody’s Rootin Tootin Shootin’ Gallery is inspired by the Woody’s Roundup television show. Riders shoot suction-cup tipped darts at a variety of targets.

Once you’ve reached the end of the ride, check out how many points you’ve earned and compare them against your personal best or your friends and family. A little friendly competition makes this attraction all the more fun!

Are you a fan of Toy Story Midway Mania?