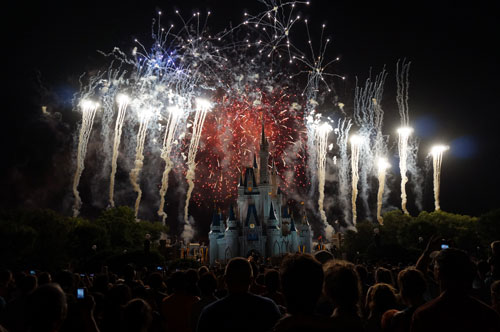 Webster’s dictionary defines a “finale” as the last part of something, especially when it comes to a performance or a musical.

Since the attractions and shows at Walt Disney World all tell stories, it makes sense that each has a finale to wrap up the story.

Many of the finales that we see in Walt Disney World are very special and really cap off the story in a special way. That definitely holds true at the Magic Kingdom.

But take a look at the top five finale moments in Magic Kingdom:

As I put this list together, I surprised myself and adding Splash Mountain. Yes, this Frontierland favorite is a log flume attraction, but it also tells an interesting story of Br’er Rabbit and his adventures. After Br’er Rabbit takes his plunge into the briar patch and you plunge down the main hill, there’s still something quite spectacular to see. In the end you float by the riverboat while the music of Zip-a-Dee-Doo-Dah plays, signaling that Br’er Rabbit has happily made his choice to stop wandering and enjoy home. (At least that is my understanding of the story). It’s an exciting conclusion to an exciting ride that definitely has a happy ending.

Well what do you know, Frontierland gets a second entry into the list of finale moments in the Magic Kingdom. That was a surprise to me too!

If you can enjoy a little bit of corny humor and clever dialogue, you can appreciate the Country Bear Jamboree –  a chance for a mismatched set of bears to put on a show. Each of the acts in turn entertains the audience. However, at the end, all the acts come together in one grand finale that sends you out of the theater tapping your toes and whistling a little tune. It’s a great ending to a truly underrated show.

Why I don’t believe there is an official, Disney-sanctioned story of the Haunted Mansion, the one I hear most often goes like this: Emily and Master Gracie were engaged, but sadly get involved in a tragic love triangle when it comes out that Madam Leota also loved the Master. Leota wanted a way to get rid of Emily and killed her on her wedding day. In the end, the plan didn’t work and Leota didn’t get Gracie for herself. Master Gracie was so upset by Emily’s death that he hung himself.

I share the story because you see it unfold as you go through the Haunted Mansion. In the stretching room that you see shortly after entering the Mansion, you can look up and see the hanging body of Master Gracie. As you supposedly run through the house to escape, you eventually get to the point where you can see Madame Leota calling out the spirits in the ballroom and séance scene to chase you from the house. Eventually you are pushed out the window and fall backwards to your death. This happens when your Doom Buggy turns around and goes down the steep decline into the graveyard.

So what is the finale at the end of this involved story? It’s when you see the ghosts, who were charged with chasing you, follow you home. Whether you consider the old effect or the new more technically advanced one that puts the ghosts in the Doom Buggy with you, it’s an amazing way to wrap up the story.

Donald Duck – he’s always creating problems and having a hard time controlling both his curiosity and his temper. Fortunately, Mickey Mouse knows how to save the day, as he often does. In the end he is able to calm the chaos Donald created and bring order to the show. As he does, all of the instruments come together to make a beautiful finale moment that nicely wraps up a series of (what could be) random shorts and ties them into a coherent single-story that both makes sense and is very satisfying.

It’s hard to beat a grand finale that shoots hundreds of fireworks high in the air, and that is why I selected Wishes for the number one finale moment in the Magic Kingdom. The story tells us that it is important to believe in our wishes, and how good will ultimately triumph over evil. In fact, the Blue Fairy tells us that we must always believe in our wishes since they are “magic in the world.” And with that the sky comes alive with fireworks to help you cap off your day at the Magic Kingdom. A finale in the show that also acts as a finale to your day. Nice.

What is your favorite finale moment in the Magic Kingdom?