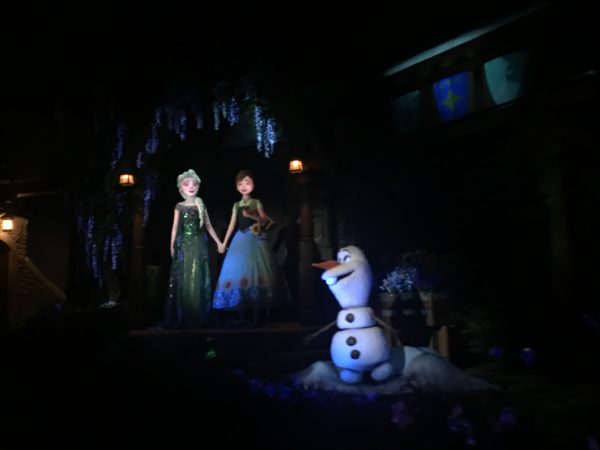 Frozen Ever After - Anna Elsa and Olaf

Top 13 Disney World Attractions the Entire Family Can Enjoy Together

Traveling to Disney World with your family can be difficult – especially if that family includes people of all ages. The littlest ones are too short to ride the exciting attractions that the older kids and more adventurous adults want to ride. Some adults are thrill-seekers while others just want to enjoy the sights. It may seem like you can’t find anything to agree on!

Fortunately, when Walt Disney imagined Disneyland and then Disney World, he wanted the entire family to be able to enjoy the parks together as a family. This vision led him to create even the most kiddie themed rides to be family appropriate not only in size but also in entertainment.

Let’s take a look at the top 13 family attractions that everyone can enjoy together!

Country Bear Jamboree in Magic Kingdom‘s Frontierland is an audio-animatronic stage show during which bears perform country music. There are also audio-animatronic animals in the audience who interact with the bears on stage.

This opening day attraction is often overlooked because people think it is “old and outdated,” but that’s a shame. It’s true that this isn’t a highly technical attraction, and no much has changed since it opened in 1971, but it is a classic.  It’s also still very entertaining.

Kilimanjaro Safaris in Disney’s Animal Kingdom‘s Africa section is totally different from anything else at Disney World, which is why it’s on the list of things that the whole family will love.

It is appropriate for any height, and kids and adults alike will love seeing the neat animals on the safari. The ride moves pretty slowly, but there are some points where it speeds up. Also, as with any attraction, parents will want to make sure their kids are sitting down. The ride vehicle is an actual truck, and things do get bumpy at times.

There is a FastPass option for this ride, but you don’t usually need it since the wait isn’t usually very long.

11. Living with the Land

Living with the Land in The Land Pavilion in Epcot‘s Future World is a slow moving boat ride through a green house and a fishery. The narration is highly educational, and the food that is grown in this attraction is actually served in Disney World. Agriculturalists who work here are also testing new techniques for growing that are both sustainable and highly productive.

Even if you aren’t interested in agriculture, there are some interesting scenes inside, and kids will love seeing the animals in the fishery.

Mickey’s PhilharMagic is an indoor stage show in Magic Kingdom’s Fantasyland. There is a FP+ available, but the wait is usually only until the next show begins, so save your FP+ for something else.

The seats in this air-conditioned theater are typical movie theater seats, and kids are welcome to sit on parents’ laps. This show is highly entertaining. You’ll find yourself singing along to familiar Disney songs, and there are some surprises along the way. This 4D show really isn’t something you want to overlook.

Sully and Mike from Monsters, Inc. have to collect laughs to power the city of Monstropolis, and they need your help! Kids will love submitting their own jokes, and everyone will be laughing at the mic check and “that guy”! The best part about this show is that it’s very interactive. The monsters do a great job involving the audience- especially “that guy”.

Spaceship Earth is the iconic geodesic dome in Epcot’s Future World. Inside is a classic slow-moving dark ride that takes riders through the history and development of language and technology and the parts they’ve played in communication.

The Omnimover cars inside are appropriate for any height, and the end of the ride has a fun opportunity to create your own future. Whether you’re young or old, you’ll love learning how communication has evolved and what it will look like in the future.

Jungle Cruise in Magic Kingdom’s Adventureland is a slow moving boat ride through a man-made jungle of the major rivers of Asia, Africa, and South America. Along the way, you’ll find audio-animatronic jungle animals and lots of tropical plants. Your tour is guided by a Cast Member who has practiced and memorized a script, but it’s largely delivered extemporaneously with lots of ad-libbing.

Cast Member tour guides are free to make their own corny jokes along the way, so every ride will be a little bit different.

The Jungle Cruise is what came of Walt’s vision to have a safari in his park. Knowing that live animals and real guests wasn’t a good mix because it’s hard to control either of these groups, Walt decided that a simulated reality would be a better option.

Regardless, any one of any age or height will enjoy Jungle cruise. It’s the perfect combination of entertaining and informative.

Tom Sawyer Island is a man-made island in Magic Kingdom’s Frontierland that is only accessible by river raft. To get there, you have to cross the Rivers of America. The island is based on Mark Twain’s novel, The Adventures of Tom Sawyer, so it makes sense that the island has a ton of places for kids to play and explore. The areas are large enough for adults to fit too, but if your kids are old enough to wander around by themselves, find a good spot in a comfy rocking chair on the front porch and take a breather.

5. Pirates Of The Caribbean

It’s exciting and fun, and the “Yo-ho, a pirates life for me” song will be difficult to get out of your head!

This slow-moving dark ride is one of the many boat rides in Magic Kingdom. They all use the same ride system, but the attractions are all unique. This one has a small drop at the beginning as you go underground. The attraction is a good transition from kiddie rides to more adult rides if you have very young children in your family because there’s no height limit and no real scary parts. However, it’s enough to entertain even the most thrill-seeking adult.

Let’s face it: everyone loves Frozen. With such a catchy theme song, it’s hard not to. When you throw in Disney Princesses and some fun characters like Olaf and Sven, you have a recipe for success.

Frozen was the biggest thing to happen to Disney World since, well, maybe Disney World itself. It brought huge crowds with very long waits to get a glimpse of the sisters.

Once Frozen Ever After opened up, in the Norway Pavilion in World Showcase, lines were extremely long for this attraction, and they remain so today. I can’t think of anyone who wouldn’t love this attraction, which is probably why it’s so popular.

If you want to ride Frozen Ever After, I highly recommend getting a FastPass+ since the wait is long and most of the queue is outdoors.

Fly through Neverland on cars with overhead tracks and enjoy the beautiful sights of London. Peter Pan’s flight is not a boat ride, which makes it special among other similarly themed attractions.

Peter Pan’s flight almost always has a long wait because so many people know how awesome this attraction is. There’s no height or age limit, and with only small drops, the whole family will love it.

Toy Story Mania! in Disney’s Hollywood Studios‘ is consistently one of the longest waits in all of Disney World. They recently expanded this from two to three tracks to accommodate the already large crowds, but it will be even more important when Toy Story Land opens up in Summer 2018. Fortunately, a FP is available for this attraction.

Toy Story Mania is an incredibly fun attraction. It features arcade style games in a 4D theater. The cars spin mildly to line riders up with the games, but it’s nothing that will give you motion sickness or scare young riders.

Guests of all ages will love this interactive game and hanging out with Toy Story Characters.

Buzz Lightyear’s Space Ranger Spin is a lot like Toy Story Mania! in theming and purpose. Instead of arcade games, Buzz Lighyear is trying to save the planet by defeating the evil Zorg, and he needs your help. You have to spin your ride vehicle and shoot as many Zs as possible.

Every member of the family will love this highly interactive ride in Tomorrowland! At the end of the ride, you’ll see how many points you have, and you can compete with your family and friends to see who can get the highest score.

What’s your family’s favorite attraction in Disney World to do together?