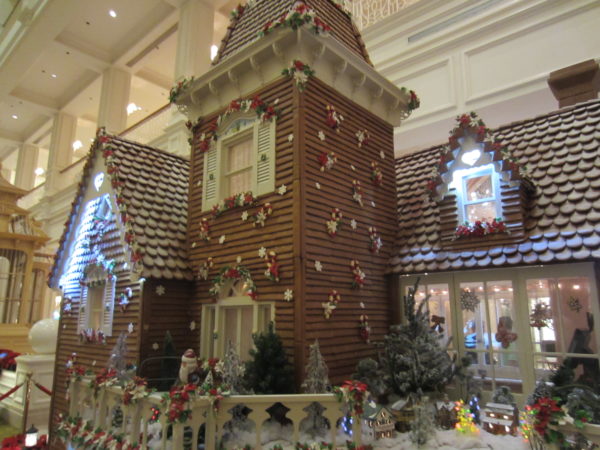 Disney really goes over the top to decorate every inch of the parks, but it’s the Disney resort hotels that really impress this time of year.

The best part is you don’t have to stay at one of these hotels to see the beauty. Any Disney Resort guest can visit any of the hotels free of charge, though you’ll have limited access to some areas, like the swimming pools.

Disney’s Beach Club Resort is right next door to Disney’s Yacht Club Resort, and it’s within walking distance to Epcot‘s rear gate, International Gateway, which puts you right into the heart of World Showcase. The Beach Club is a New England-style deluxe resort with really nice amenities. If you choose to stay here, you’ll have access to the amazing Stormalong Bay and the Ship Shape Spa.

At Christmastime, the resort lobby has on display an impressive gingerbread carousel. Disney pastry chefs use 100 pounds of icing, 50 pounds of dark chocolate, 36 pounds of honey, 100 pounds of confectionary sugar, and 96 pounds of bread flower to create the masterpiece. What’s more, the carousel’s horses are completely edible, though they might not be too happy if you walked up and took a bite. 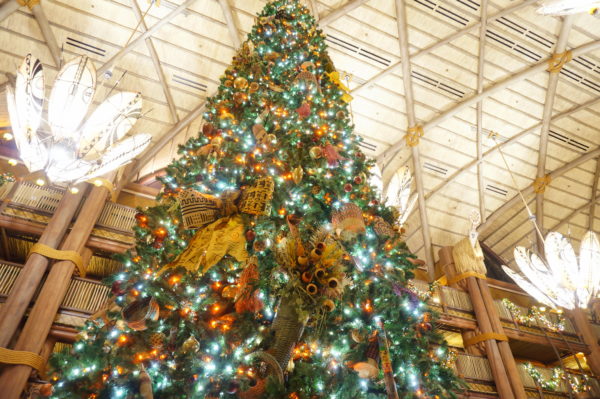 This beautiful tree is at Disney’s Animal Kingdom Lodge!

Disney’s Animal Kingdom Lodge is known for its beautiful views of the savanna complete with a variety of live animals, but at Christmastime, the Lodge’s lobby erects a four-story tall Christmas tree decorated with African-style Christmas ornaments including musical instruments and animal masks. What’s really cool is that there are several smaller trees throughout the resort that are each decorated differently. Stop by and check them all out, and don’t forget to see the animals!

Disney’s Grand Floridian Resort and Spa is Disney World’s signature hotel with amazing Florida-inspired touches. It’s only right that this hotel does a homey Christmas theme.

First, check out the five-story Christmas tree in the lobby. It’s the largest on property, and it’s decorated with Victorian ornaments. It’s really beautiful.

Disney pastry chefs transform the lobby of the Grand Floridian into a whimsical winter wonderland.

But the main event here is the massive, life-size gingerbread house. It’s 16 feet high and is made up of 1050 pounds of honey and 800 pounds of flour, among other ingredients. Disney pastry chefs put in a painstaking 400 hours every year just to bake the gingerbread, and that isn’t including assembly! Monday through Saturday, pastry chefs are on hand to give tips about creating and decorating your very own gingerbread house at home. They’ll even give you a taste of theirs plus a recipe to take home with you.

It’s no secret that Disney’s Imagineers and Horticulturalists put in hundreds if not thousands of hours to transform Disney World into a Christmastime wonderland, but at Disney’s Fort Wilderness Resort Campgrounds, it’s the guests who do most of the work.

Many guests decorate their campsites, their tents, their RVs and their trailers with Christmas lights, inflatables, and any other decorations you can think of. It’s free for you to take a leisurely stroll around the grounds and admire their work, or you can pay $79 for a 25-minute “sleigh” ride through the campground from 5:30 to 9:30 every evening.

Disney also transforms the Hoop-Dee-Doo Musical Revue for this time of year. The show changes slightly, and the characters wear their Christmas best. I bet you’ll leave in a happy Christmas spirit!

Some people may argue and say that the Grand Floridian is the best resort at Christmas time, but there’s something nostalgic about Disney’s Wilderness Lodge. It has such a homegrown feel with its warm fireplaces, welcoming rocking chairs, and the bubbling brook under the log bridge. The decorations are elegant yet All-American. It just feels like you’re in the mountains! 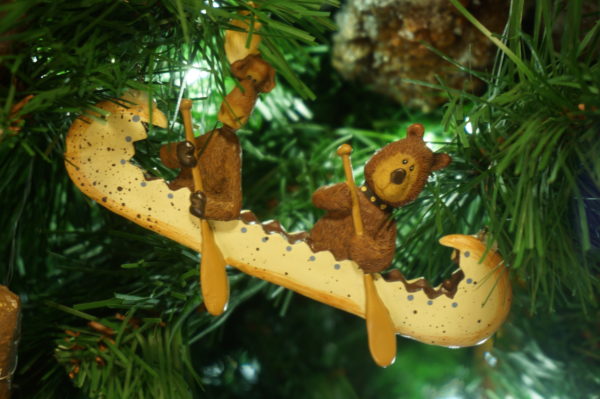 Look at this cute ornament on the tree at Fort Wilderness!

In the lobby, you’ll find a four-story Christmas tree complete with Native American-style ornaments like teepees, deer, and pine-cones. There’s no place on Disney property quite like the Wilderness lodge!

Which Disney resort is your favorite at Christmastime?