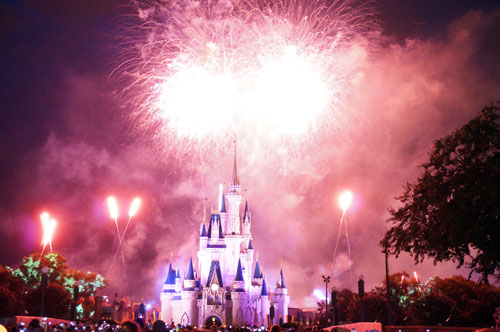 I can’t think of a better place to dream big dreams than the most magical place on earth: Walt Disney World! Most of these things aren’t difficult to accomplish but they aren’t things you would do on every Disney Vacation.

Whether you use this bucket list or create your own, be sure to take pictures along the way and have a great time!

14. Electric Water Pageant from the beach of the Poly

The beaches of Disney’s Polynesian Resort are the perfect setting to watch the Electric Water Pageant and the Happily Ever After Nighttime Spectacular. Sure, it’s fun to watch fireworks from inside Magic Kingdom, but sometimes I’m just not in the mood for the crowds. What’s more, the water pageant is only visible from select Disney resort hotels and from Magic Kingdom outside of the park.

Disney World has two water parks on property including Blizzard Beach and Typhoon Lagoon. Summit Plummet at Blizzard Beach is the third tallest water slide and the fastest free fall water slide in the world. Dropping 12 stories in just a few seconds, I’ve already checked this on off my bucket list.  I don’t plan to try it again!

12. Behind the Scenes Tours

There are several behind the scenes tours in Disney World, but the one that provides the most secretive look at Walt’s commitment to his vision is Keys to the Kingdom. This tour takes guests inside the Utilidors, a set of tunnels on the first level of Magic Kingdom that Cast Members use to easily and quickly go between lands without being seen out of place. Keys to the Kingdom is a day-long tour that immerses guests in how Disney creates the magic every day.

The deluxe resorts on the monorail loop have some amazing restaurants and bars. Someday, I think it would be fun to do the monorail crawl and eat and drink at every resort on the loop. Disney’s Contemporary Resort, Disney’s Grand Floridian Resort, and Disney’s Polynesian Village Resort all have several options for dining and drinking including signature dining, table-service, counter-service, lounges, and character dining. I hope you’re hungry!

10. Eat and Drink around the World

While we’re on the topic of food, let’s talk about Epcot‘s World Showcase. Eleven countries are represented here, and each has its own unique and authentic food and drink offerings. If you really want to challenge yourself, visit during one of the festivals where many more country-themed booths are set up with even more options!

The Kitchen Sink at the Boardwalk’s Beaches and Cream restaurant contains one of everything! It includes one scoop of every ice cream flavor and a scoop of every topping on the toppings bar.

This character dining table-service restaurant is fit for royalty! Dine with princesses and princes as you don your favorite formal attire (optional but encouraged). Cinderella’s Castle is beautiful with medieval décor and fairy tale grandeur. Don’t forget to make Advanced Dining Reservations if you plan to check this off your bucket list since it’s one of the hardest dining reservations to get!

The Food & Wine Festival is in the fall. During this time, food and wine from more than 30 countries show up in World Showcase along with chefs who are top in their field. They provide cooking demonstrations and wine pairing suggestions along with entertainment and merchandise.

The Flower & Garden Festival is the other festival at Epcot, and it takes place every spring. All of Future World and World Showcase take park in this event, and flowers and topiaries are everywhere! The flower displays are beautiful, but more impressive (to me, at least) are the characters made of all organic materials. Classic Disney characters like Mickey, Minnie, and Pluto along with newer characters like Anna and Elsa make their appearance. There are also several food and drink offerings during this show, and I speak from personal experience saying they are incredible!

If you visit during one or both of these shows, be sure to grab a Passport book. Festival stands will stamp your book with a unique stamp; it makes a great souvenir! If you complete the whole thing, you get another stamp for completion.

Not to be outdone, Magic Kingdom also hosts special parties throughout the year. These hard-ticket events require an additional purchase, and there are only a certain number of tickets available. Therefore, crowds are smaller, and you’ll be able to see and do more during this time than during regular park hours.

Mickey’s Not So Scary Halloween Party takes places on select nights in September and October. Guests can trick-or-treat and get some great Disney-themed candy plus experience a special parade where some hard-to-find characters like the Headless Horseman make an appearance.

Mickey’s Very Merry Christmas Party takes place on select nights in November and December. You’ll be treated to unlimited hot chocolate and cookies plus a special treat with snow!

Each party has unique entertainment and merchandise including game cards and trading pins that are only available during these parties.

Not long after the Christmas party, Disney World transitions to New Year’s Eve festivities. It’s said that Disney does NYE like no other place on earth. There are parties all over the resort plus bands, dance parties, and special merchandise. There is also a special fireworks show at both Magic Kingdom and Epcot that will put New York City’s fireworks to shame. The event is so big that the fireworks show takes place on both December 30th and 31st.

Every night, Magic Kingdom gives their guests a “kiss goodnight.” After most of the guests have left and the park is closing, Cinderella Castle lights up, and a special message is played:

“Ladies and gentlemen, boys and girls, on behalf of everyone here at the Magic Kingdom, we thank you for joining us today for a magic gathering of family, friends, fun, and fantasy. We hope your magical journey with us has created wonderful memories that will last a lifetime.

“Walt Disney said that the Magic Kingdom is a world of imagination, hopes, and dreams. In this timeless land of enchantment, magic and make believe are reborn, and fairy tales come true. The Magic Kingdom is a place for the young and the young at heart. A special place where when you wish upon a star, your dreams can come true. Until we see you again, have a safe trip home. Thank you, and goodnight.”

This is a heartfelt way of thanking you for visiting Disney World for the day and giving Walt a living legacy. It’s also a nice way of telling you it’s time to leave! The message plays every 30 minutes until the last guest has left the park, so it’s possible to experience it more than once in a night!

I know that many people have taken a Disney Cruise, but it is number three on our bucket list because for many it’s probably a once in a lifetime thing. Imagine the fun of boarding the Disney Magic, Wonder, Dream, or Fantasy and cruising to paradise-like destinations. This vacation would be even better if you can have a combination land and sea experience by visiting Disney World and taking a cruise during the same vacation.

This is probably the most out of reach item in our bucket list, but staying at Cinderella’s Castle Suite is still on the list even though no one can actually book this room. The only way you can stay here is if you are invited, and it’s usually reserved for contest winners who happen to be at the right place at the right time. The first winner was Brad Fouch and his family on January 25, 2007 at 10AM. He happened to be sitting in Row 2, Seat 8 in Simulator 4 of the Star Tours attraction.

This suite on the fourth floor of Cinderella’s Castle in the middle of Magic Kingdom was originally intended for Walt and his family, but Walt passed away before Magic Kingdom could be completed. This French-themed suite has several special Disney touches like a twinkling star ceiling and beautiful stained glass windows overlooking the park.

If you’re lucky enough to win this prize, not only will you get to stay in the Castle Suite, but you’ll also win a royal photo session and become the grand marshal for the parade that day. What’s more, you’ll get to dine with Cinderella herself at Cinderella’s Royal Table and you get exclusive access to the park two hours after the park closes! When you return to your room, desserts will be waiting for you.

1. Find the most hidden Hidden Mickey

If you happen to be at Magic Kingdom’s Under the Sea with the Little Mermaid on November 18th at noon, you just might catch a glimpse. In the queue line just before you go indoors, the rocks are arranged perfectly to create a shadow in the shape of Mickey Mouse at exactly this time. Why November 18th? Because it’s Mickey’s birthday!

The Cinderella Castle Suite may be much more exclusive and unlikely to happen, but this hidden Mickey is number one our list because everyone has the chance to see it, and – well – Mickey is number one! Since “it all started with a mouse,” it’s appropriate that he graces our number one spot on our Disney bucket list.