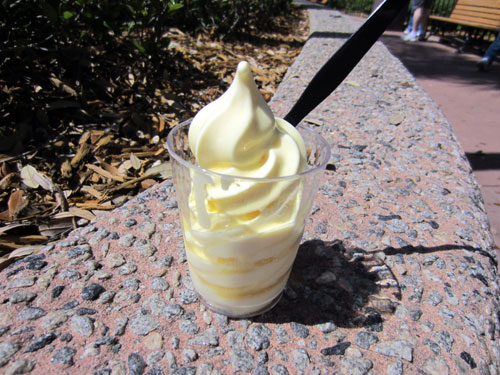 Dining in Disney World is practically an attraction in itself. In fact, I could plan a whole vacation around food!

With food comes drink, and I’ve been known to enjoy an adult beverage on occasion. Alcoholic drinks can, these days, be found just about anywhere in Disney World – even the Magic Kingdom which was dry for many, many years.

Here are the top ten adult beverages in Disney World.

The Piña Colava is a refreshing frozen beverage with Bicardi Razz rum, Piña Colada mix, and raspberry puree. It’s served all around The World but is especially popular at pool bars.

The Cotton-tini became popular thanks to Pinterest, but everything tastes better in Disney! T-Rex in Disney Springs serves up a martini glass filled with cotton candy then pours over the cocktail. As the cotton candy dissolves, small pieces are left behind and it makes for something almost too pretty to drink… almost. It’s available in three flavors including apple, tropical, and cosmo-paleo. Pick your poison and watch the magic happen!

Disney offers some unique wines from all around the world not only in World Showcase but across the resorts. For a special wine treat, head over to Jiko at Disney’s Animal Kingdom Lodge on Wednesdays for a wine tasting experience. A professional sommelier helps you sample wines from South Africa, some of which are available for purchase with your dinner reservations or by the bottle in the gift shop.

Drinking around the world in Epcot‘s World Showcase is probably on most adult bucket lists and for good reason. The beers available here are authentic and unique. However, too many people head straight to Germany or the United Kingdom and belly up to the bar thinking that these are the only places to get good beer. Unfortunately, this means that they’re missing out on some delicious options like Carlsberg from Norway, Dos Equis from Mexico, Tsing Tao from China, Birra Moretti from Italy, Kronenbourg from France, and Moosehead in Canada. Besides these headliners, some countries offer flights so you can try even more flavors. Next time you’re drinking around the world, don’t overlook the less well-known countries.

The outdoor champagne stand in France is the place to stop if you like a good adult slush. There are two flavors: Grand Marnier with orange drink and Grey Goose Citron with lemon drink. Both are delicious, but they’re very smooth so resist the urge to drink them too fast! During the Food and Wine Festival and the Flower and Garden Festival, the stand also sells the limited edition Parisian Cosmo Slush with a shot of either of the alcohols.

The Yak Attack at Disney’s Animal Kingdom’s Yak & Yeti restaurant or the Anandupur Quality Beverages quick-service window is a tasty mixture of frozen mango daiquiri, run, and wildberry swirls. The Yak Attack is sure to keep you cool during your hot trek through Asia.

Are you noticing a trend? These frozen drinks are a great way too cool down in the Florida heat. In Mexico, the frozen margarita stand almost always has a line no matter the time of day. The drink is a mix of tequila, triple sec, and your choice of fruit mix (strawberry, lime, mango, or fiesta- a mix of all three).

If you like the frozen margaritas outside, head inside the pyramid and try something totally different. Specialty margaritas include avocado, blood orange, cucumber, jalapeño, and coffee mezcal. You can also get a tequila flight! What?!

Named after the first Filipino to resist Spanish colonization in the 1500s, this blend of Myers Original Dark Rum and tropical fruit juices topped with Bacardi 151 Rum is a sight to be seen. It’s the only drink in all of Disney World to be served in a pineapple and it can be found at Disney’s Polynesian Resort in the Tambu Lounge! If that doesn’t say tropical paradise, maybe a drink umbrella with a couple cherries will tip it over the edge.

But what if I told you the Dole Whip could be made better? This drink is available during Festival season at Epcot in the Refreshment Port stand. It’s made with the traditional Dole Whip and dark or coconut rum.