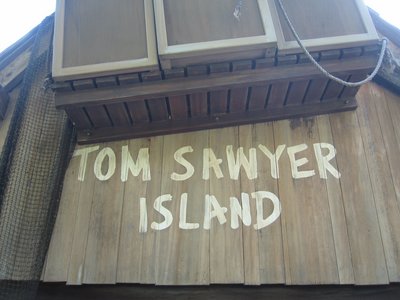 Tom Sawyer Island is an outdoor adventure and play area located in the Magic Kingdom’s Frontierland. The narrow and elongated island sits in the middle of the Rivers of America, around which the Liberty Belle riverboat peacefully paddles. Inspired by Mark Twain’s tales in The Adventures of Tom Sawyer and The Adventure of Huckleberry Finn, the area has suspension bridges, old mills, dark caves, and more for visitors to explore.

Like Tom Sawyer and Huckleberry Finn – and Mark Twain himself – Walt Disney spent much of his childhood in Missouri. When he was four years old his family moved to Marceline, and four years later the Disney’s moved to Kansas City. As a boy, Walt Disney felt a strong connection to the world of Tom and Huck, and his love for Twain’s books continued throughout his adult life.

Getting To The Island

Tom Sawyer Island is a true island, and the only way to get there is on a large raft piloted by a Disney cast member. Visitors board one of the rafts at Tom’s Landing, which is located close to the red buttes of Big Thunder Mountain Railroad. The rafts can carry quite a large number of passengers, and there is rarely much of a line to wait in before boarding.

The rafts are relatively primitive, from the parallel logs on which they float to the long wooden tiller that casts members use to pilot the crafts by hand. Each rectangular raft is ringed by a wood and rope railing, and propelled by a motor that takes the raft at a leisurely pace from shore to shore.

To help visitors explore the island, there are maps at periodic points showing the paths and the various features. Among other things, the maps point the way to several caves that are open for kids and adults to explore. These dark passages include Injun Joe’s Cave (named for the primary villain in The Adventures of Tom Sawyer), Smuggler’s Cave, Catfish Cave, and Ambush Cave.

The caves twist and turn, illuminated with dim light from occasional lanterns or openings in the cave walls. Injun Joe’s Cave is the largest, and this rocky passage includes a large, spooky face composed of holes in the rock darkly lit from behind. The different caves feature sound effects of bats flying overhead, stalactites and stalagmites emerging from the floor, and even an underground stream in which the water appears to run uphill.

One of the caves is actually designed to resemble an abandoned mine – Old Scratch’s Mystery Mine. While exploring the mine, visitors can keep their eyes peeled for some of the shiny gems that the miners were after. The mine is lit by lanterns and supported by regular beams that add authenticity to the design.

Guests on the island can explore two different mills and see everything from the grinding mechanisms at the heart of the mill to a view across the rest of the island, Frontierland and Liberty Square.

Inside Harper’s Mill, amidst the machinery of the mill itself, keep and eye out for a tiny little bluebird nesting in between the prongs of the turning wheels. The bluebird is an homage to the classic Disney animated short The Old Mill. In Potter’s Mill, a winding stairway takes you to a lookout at the top of the mill, with an impressive vista out across the Rivers of America.

Although the whole of Tom Sawyer Island is really one large play area, there is a designated playground for kids between the ages of two and twelve. Here, kids can run, climb, slide, and crawl around the features of the playground, while adults relax in a shaded area next to the grounds.

Across a shaky suspension bridge is Fort Langhorn, one of the signature attractions on Tom Sawyer Island. Originally named Fort Sam Clemens, the fort was re-named after Disney’s movie called Tom and Huck came out in 1995 because a Fort Langhorn appears in the movie. Samuel Langhorn Clemens was Mark Twain’s birth name, so in spite of the name change the fort still pays tribute to Tom Sawyer and Huck Finn’s creator.

The fort has wooden walls and towers around a central courtyard. A catwalk gives visitors a view down to the rest of the fort, while the towers offer a view out to the rest of the island. There are even slit windows in the towers with rifles where visitors can ward off marauders. In case the invaders overrun the fort, there is a secret tunnel escape route (although the secrecy of the tunnel is somewhat marred by the presence of the maps on which it is clearly marked.)

The fort has a blacksmith shop that visitors can explore, with all the tools and details you would expect in an active blacksmith forge, as well as a few animal residents.

Aunt Polly’s – named for Tom Sawyer’s imperious guardian – is a turn-of-the-century style building with a counter where guests can order a cool beverage on a hot day. A shaded patio with gingerbread railings provides views across the river.

There are six whitewashing paint brushes hidden around Tom Sawyer Island in tribute to the well-loved story of Tom whitewashing his aunt’s fence. Guests who find one of these brushes can turn it in to a Disney cast member and receive a prize in return, such as a FASTPASS to a popular Frontierland attraction.

Tom Sawyer Island is a great place for kids to burn off extra energy, and the features of the island will probably appeal most to a younger crowd. However, adults with a sense of adventure may also enjoy getting into the spirit of exploration if they are chaperoning a younger guest. If nothing else, Tom Sawyer Island has places to relax in the cool shade and recoup before continuing your Disney adventure.

The uneven paths, swinging and bouncing bridges, and other features of the island mean that visitors must be ambulatory in order to enjoy Tom Sawyer Island. The area is not wheelchair or handicap accessible.