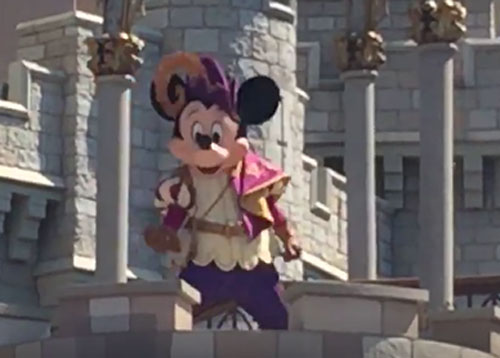 Over the past few years, Disney has been remodeling the hub at Magic Kingdom, and I think it’s finally completed. There’s so much going on, and you need to get the inside scoop. Don’t worry! I’m here to give you the top five tips for getting the best view and enjoying it!

5. Go to the Last Showing

Magic Kingdom’s hub beautifully displays Cinderella Castle, but that beauty comes at a price- no shade. No matter when you stop for the show, you won’t be able to find relief from the sun.

To minimize sun exposure, I recommend going to the last show of the day. The last showing will likely have heavier crowds than the other showings, but with such an expansive area, it shouldn’t be a problem. Plus, this is also the time that other attractions are at their peak.

Instead of going for the first show of the morning (which would also be a good time to avoid the sun – as much as that’s possible in Florida), use this time to take advantage of short wait times at attractions. The evening hours will be busier, so visiting the Castle Show at this time will mean less waiting and more enjoyment.

You can look far and wide, but you’re not going to find any shade. That doesn’t mean there aren’t good viewing locations. There are really two options.

First, you can get as close to the stage as possible. This will put you in the midst of the action and will probably make for the most immersive experience.

Second, you can hang back by the Partner’s Statue in the middle of the hub. This is a good place to be for a few reasons. First, the crowds will be lighter back here. Second, the subtle downgrade in the pavement, which you probably didn’t even notice, places you at a higher plane than the people between the stage and the statue. This means that even short people will probably see better back here.

This is really a good rule anywhere in Disney World, but it works especially well here. With no shade, you’ll want to cover yourself and your family in sunscreen and big, floppy hats to reduce sun exposure. Also, be sure to drink plenty of water. At about 30 minutes long, watching this show could really dehydrate you.

I know. This seems contradictory to everything I’ve ever told you about shows and attractions at Disney World, but it’s true. Since there’s so much space and nobody else really wants to hang out in the sun very long (did I mention there’s no shade in the hub?), arriving just minutes before the Castle Show is set to start really works here.

Mickey and the rest of the Fab Five are preparing for a party, and they’ve all invited their friends:  Tiana, Naveen, and Louis of The Princess and the Frog, Rapunzel and Flynn Rider from Tangled, and Olaf, Anna, and Elsa from the smash hit Frozen join together to make for a great show.

Mickey’s Royal Friendship Faire, which replaced the 10-year run of Dream Along with Mickey, features better costuming, more diverse characters, and more films represented. The light plot line and fun, new, updated characters are sure to please kids and kids at heart.  It’s not one you’ll want to miss!

Have you seen Mickey’s Royal Friendship Faire?  Want to?