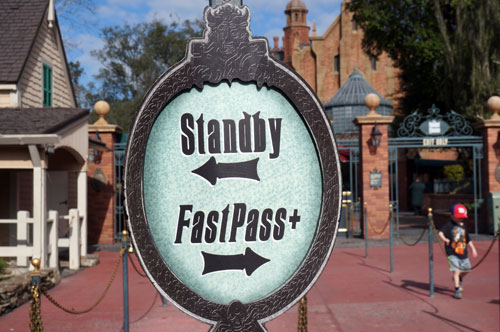 Walt Disney World Resort guests can schedule three FastPasses 60 days before the first day of their vacation, while off-property guests can schedule 30 days in advance. It is complimentary with your park ticket, and you can make reservations on a computer, on the MyDisneyExperience app, or at a FP+ kiosk in the park.

Here’s how it works: each ride has a maximum number of guests it can hold in an operating day. It’s usually broken down by ride capacity per hour then multiplied by how many hours the park is open on a given day since park hours vary from day to day. A portion of these seats are set aside for FastPasses while the remainder are for stand-by riders. For the most popular attractions, the return times can be depleted and FP reservations become “sold out.”

Now that you know how the FastPass+ works, let’s take a look at how to make the most of your time slots!

1. Know when to schedule

As a general rule, it’s best to schedule FastPasses during busy times. In the early morning hours, and during morning Extra Magic Hours, you’ll likely be able to walk on to even the most popular attractions with little or no wait.

Once the park fills up and reaches its peak attendance in late morning or early afternoon, standby times will rise. This is the time to schedule a FP to maximize the benefit. You’ll walk on to attractions in the morning then use FP to decrease your wait times later in the day.

Since this is a general rule, it doesn’t really apply to holidays when the parks will almost always be busy. Another exception to this rule is current and very popular attractions. As of this writing, Seven Dwarfs Mine Train, Anna and Elsa Meet & Greet, and Soarin‘ around the World fall into this category. People will head straight for these attractions, so lines will swell even in the first hour of park opening.

If you plan to park hop, it’s a good idea to schedule your FastPasses for the second park you plan to visit in the day.

If Hollywood Studios is first on your list then you plan to head to Animal Kingdom to catch Rivers of Light, schedule your FastPasses for Expedition Everest, Dinosaur, and Kali River Rapids for late afternoon or early evening. You’ll leave yourself the early morning hours to conquer Hollywood Studios then arrive at Animal Kingdom just as the crowds and wait times reach their peak.

Disney World is a big place. Allocate travel time.  It’s easy to spend the morning at Hollywood Studios with good intentions to head to Magic Kingdom for a FastPass+ on Space Mountain later in the day.  It’s also easy to miss your FastPass+ window if transportation takes longer than expected.

Even if you’re not traveling from park to park, you’ll still have to travel from land to land. If you have a FastPass+ for Buzz Lightyear’s Space Ranger Spin in Tomorrowland then want to head to Frontierland to ride Big Thunder Mountain Railroad, be sure to leave yourself enough time to make the trek.

The best thing to do is complete one area including your FastPass(es) then head on to another FastPass in another land. This will save you valuable time and steps and prevent unnecessary backtracking.

4. Remember that you have to eat

Whether you have Advanced Dining Reservations or just need to stop at a quick-service restaurant, you’ll need to stop to eat at some point. If you follow traditional dining times, you might find yourself in crowded restaurants with no place to sit or have an impossible time getting a reservation. Eating at off times will save you additional minutes, but this is a topic for another article!

The worst thing you can do is have to rush through a meal to get to your FastPass reservation especially if you scored an ADR at a coveted restaurant like Be Our Guest. When scheduling your FastPasses, be sure to factor in enough time in between for meals and snacks.

5. Know which rides to choose

Almost as important as knowing when to schedule is knowing what to schedule. There are a variety of options for FastPasses including attractions, rides, roller coasters, live shows and entertainment, and character meet and greets.

As with all rules, there are exceptions. Popular and classic Disney rides like Peter Pan’s Flight, Toy Story Midway Mania, and Kilimanjaro Safari don’t have height requirements but are almost always a good choice for FastPasses providing that you follow rule number one.

It’s always a good idea to be flexible during your Disney vacation, but it’s especially important with FastPasses.

First, you may not be able to get the time you want. Be willing to change your plans around if the attraction is really important to you. You won’t regret the move as you walk by all those people waiting in the standby line.

What’s more, if you show up for your scheduled FP and the lines aren’t too long, consider changing your FP+ time to later when the lines might be worse. You can use this time to ride something else or you can ride standby or single rider then use your FastPass and ride twice!

7. Make use of your extra FastPass+ options

Shortly after the FP system was revealed in Disney World, they decided to allow guests to make an extra reservation after all three FastPasses were fulfilled. Originally, this could only be done via the kiosks in the parks. As you can imagine, the lines for these kiosks could have used a FastPass for themselves! Now with the MyDisneyExperience App guests can make their fourth… and even a fifth… reservation via the app! Just imagine: you walk off of Soarin’, your third FastPass, and schedule a fourth at Test Track without having to walk, wait in line, and wonder what you might get! This saves you those valuable steps and time! It may seem nominal, but every minute counts in Disney World!

Even if all of the good FastPasses are sold out when you check in, choose something. Waiting in line is never fun, and even saving a few minutes can mean the ability to fit one more attraction into your Disney day!

Since children under three years of age don’t need a park ticket (that’s right- they’re free!), they also don’t need a FastPass. If they meet all of the ride’s requirements (height mostly), they can ride with the rest of the family without a reservation!

Likewise, if you want to ride the Magic Carpets with your little one, you’ll need a FastPass but they won’t.

What are the chances that everyone in your family wants to ride the same thing at the same time? Probably not very good. Maybe some family members don’t meet the minimum requirements for some attractions.

In this case, you should know that you can make different FastPasses for each person in your party. If Dad and Johnny want to meet Pluto while Mom and Sally want to ride Splash Mountain, it’s no problem! Just be sure to choose the right people for the right FastPass, and head there at the appropriate time.

It’s great when Disney options can work double duty. If Mom and Dad have a FastPass scheduled for Expedition Everest, but the kids either don’t want to or aren’t tall enough to ride, Mom can ride while Dad stays with the kids then they can switch places using Rider Switch. Both riders will get to use the FastPass line if you’ve scheduled the FastPass at the same time even if the FastPass window time has passed!

Are you a FastPass+ fan?