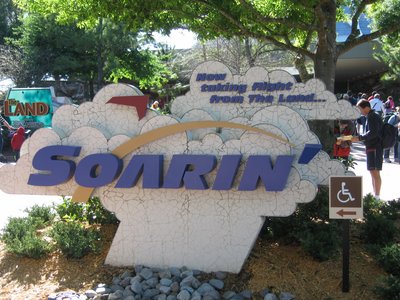 Sometimes, it is easy to think that there is pretty much no such thing as a hidden gem at Walt Disney World. If you love an attraction, chances are it is also loved by many millions of other people – a distressingly large number of whom will always be in line for said attraction with you.

Soarin’ – a simulated hang gliding ride over California at Epcot’s Land Pavilion, is one of those attractions – loved by all, and therefore never to be found without a line that seems to have no end. It is easily the most popular ride at Epcot, as well as one of the most popular rides at the entire Walt Disney World Resort. If you want to experience Soarin’ without sacrificing a large chunk of your day, here are some tips for beating (some of) the crowds.

The best time to ride Soarin’ is during the first half hour after Epcot opens, before the line gets too long. This is also the best time of day to grab a FastPass, since it will guarantee you an early return time. If you wait until later in the day, the return time may be later than you planned to stay at the park. Popular rides like Soarin’ can even run out of FastPass tickets altogether.

Even in the first 30 minutes of the day, wait times for Soarin’ can climb to over an hour. If avoiding long lines at Soarin’ is a top priority, it’s best to arrive at the park a good 30 minutes before opening to make sure that you are among the first people into Epcot. Once the park opens, you want to hustle your group to the ride entrance or send a runner to secure FastPass tickets for everyone in the group. Superfans of Soarin’ can even score a double by grabbing an early FASTPASS return time and then jumping over to the standby line before it gets too long.

Fun Even In Line

If you can’t muster the organization or motivation necessary to race for Soarin’ the minute the rope drops (after all, you are on vacation) there are still ways to make sure that the wait for the attraction is not too excruciating. In fact, Disney does most of the work for you by providing video games for guests to play while waiting. All you need to do is wait for a time when the line is about 60 minutes, because that is when the games begin.

Soarin’ loads riders in large groups, filling three rows of the simulator vehicle that rise into the air as the accompanying film plays. Arguably the best ride experience can be had in the front row of the middle section, because there will not be other riders in your sight lines and the illusion of hang gliding is more successful. If you are not at the front of the next group to board, consider asking the attending cast member if you can wait for the next group to load. Having a great seat can really make a difference with this attraction, particularly if you are riding for the first time.