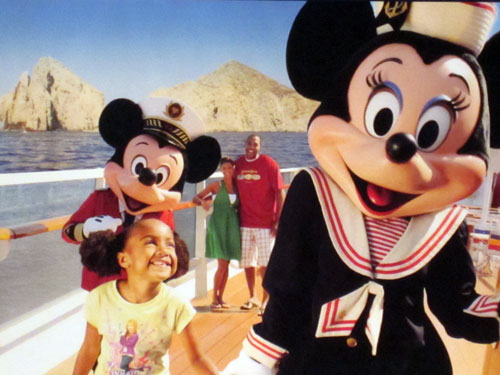 Visiting a Disney park requires a lot of preplanning including Advanced Dining Reservations, FastPass+ reservations, deciding which hotel to book, and a variety of other decisions.

However, a Disney cruise is much less complicated than visiting the theme parks because the major plans are taken care of for you.

While Walt Disney World covers an astonishing 25,000 acres, even the largest Disney Cruise ships, the Disney Fantasy and the Disney Dream, cover less than 800 acres.  The smaller ships, the Magic and the Wonder are just a little more than half that size. Although Disney ships are still massive floating worlds of wonder and continuous entertainment, cruising just doesn’t require the work that park hopping does.

If you’re a first time cruiser, there are some things you need to know. Even if you’ve vacationed on other cruise lines in the past, Disney Cruises are a bit different.

1. Every restaurant is “all you can eat.”

Some people will note that Disney Cruise Lines offer free dining; however, it is important to realize that the cost of your food is included in your cruise’s cost. This accounts for the fact that Disney Cruises are more expensive than cruise lines, and it’s like getting the Disney Dining Plan during your Walt Disney World vacation – except that you don’t have a choice on a cruise.

So, you should eat and drink as much as you want- after all, you’ve paid for it! All soft-drinks are included, and the rotational restaurants will allow you to order as many appetizers, entrees, and desserts as you can eat. If you really liked something, by all means, order another! There are also places that you can grab food throughout the day, and this is also included in your costs.

I think it’s an unwritten rule that guests shall not go hungry while Disney is the host.

Tipping on Disney Cruise Lines is a bit different from tipping on other cruises. At the end of your cruise, your stateroom account is charged a tipping fee for housekeeping and dining. If you want to know how much you’ll be charged before you cruise, check out Disney Cruise Line’s Tip Calculator Blog.

These tips are standard on cruises, and the crew in these positions counts on these tips. The tips aren’t astronomical. For example, a family of four on a three-night cruise will have a total tip charge of $144 with the following breakdown: Stateroom Host- $48, Server- $48, Assistant Server- $36, and Head Server $12.

If a certain crew member really impressed you and you would like to tip him or her a higher amount, you will be provided with envelopes in which you can place cash for an additional tip for one or more member of your service team. By the same token, if a member of your service team disappointed you, you can visit Guest Relations on the last night of your cruise and lower the tip amount.

Since you get 24-hour room service and dining at the three rotational restaurants included in your cruise fee, it’s reasonable to tip this amount especially if you take advantage of the room service, which you should!

Much like the Disney theme parks, Disney Cruise Line caters mostly to families, which means there aren’t many people out after 11PM. The kids are in bed and so are the parents.

There are a few people, though, who indulge in the Disney Cruise Line nightlife.

There are some clubs on the ships, and these clubs serve alcoholic beverages. Since many of the partiers are parents of older children or parents whose children are old enough to stay at home while they cruise alone, it might have been a while since they partied. This means that people-watching might be just as fun as the club itself.

Don’t be a creeper, but enjoy your fellow cruisers. You just might make some new friends!

Sure, the fireworks at Magic Kingdom’s Nighttime Spectacular or Epcot‘s IllumiNations are a fantastic sight to behold; but if this is what you’re expecting on a Disney cruise, you might be disappointed.

The fireworks on the cruise lines are much smaller and shorter than those in the parks, but consider for a moment that you are on a large, floating vessel in the middle of the ocean. You’re getting an exclusive fireworks show in said ocean, and nothing compares to the beautiful reflection of the fireworks on the nighttime waters. Couple this with the other ships blowing their horns, and it truly is an amazingly unique experience that you shouldn’t write off.

There are not nearly as many accommodation choices aboard a Disney Cruise as there are at Disney World, but it’s important to do some research.

First, you should know that Disney often offers deals when cruises aren’t full, which usually happens during the “off-season.” These deals will usually require that you book a certain kind of room, like a port-hole room, but you will likely save a good bit of money doing so.

Second, there are some “secret rooms” aboard the Disney Magic and Wonder ships. The secret porthole rooms are inside staterooms without a window, but they usually have an unobstructed view. The secret verandah rooms have open-air decks, but the view is slightly obstructed, so it is priced at the lower Category 7 cabin rate rather than a Category 6 cabin.

Finally, the highest priced verandah rooms are a luxury. If you are taking a longer cruise, it might be a worthwhile luxury. However, these verandah rooms might not be necessary for shorter cruises. Arguably, the only time a verandah room is a near-necessary indulgence is on an Alaskan cruise, since this is a great way to get the best view of the whales.

Many people would argue that you shouldn’t spend the extra $30 per person to eat at Palo when the other dining is all-inclusive, but if you do the math it really isn’t much more than a nominal upgrade to your cruise. Plus, this one-time meal is totally worth it.

If you want a romantic meal with amazing service, a great atmosphere, and incredible cuisine, you won’t want to miss Palo.

Every night, there are Broadway-style musicals, and Disney Cruises also have movie screenings during the day. The shows stay true to the high-quality expectation Disney fans have come to associate with the theme parks. The production and the acting are top notch. Even if you aren’t into the story, you can certainly appreciate the quality of the production.

What’s even better is that these shows are included in the cost of your cruise. Enjoy them- you paid for it!

8. Use the Personal Navigator.

Cruisers on other ships might spend their days lounging by the pools reading a book or taking a nap, but there is so much more to do on a Disney Cruise. The Personal Navigator is your schedule of events listing all of the entertainment options for the day. Although this is available on paper, it’s also available on your phone in the form of an app.

The Disney Cruise Line ships are truly a sight to behold. They are modern luxury ocean liners done in Art Deco or Art Nouveau style. Like the theming in the parks, the details are thoughtful and meticulous. Don’t just run around the ship going from activity to activity; try to take in the beauty of the ship which transports you to the golden age of cruising.

The ship can be like a ghost town in the morning hours, but there’s is no better way to see the sunrise than aboard a ship at sea. I’m not asking you to get up early every day of your vacation, but consider waking up early one day to see the beautiful sight. If you’re staying in a verandah room or even an oceanview room, you can enjoy the view right for your hotel room. If you’re staying in an inside room, you’ll have to go on deck. Don’t worry though; there won’t be many other people out.

Since you’re already up early, why not take advantage of the lack of crowds? Just like in the parks, you can see and do more in the early morning hours than during the rest of the day. Don’t forget that midday break we always suggest for park hopping too; head back to your room for a nap or just to rest for a bit with your family.