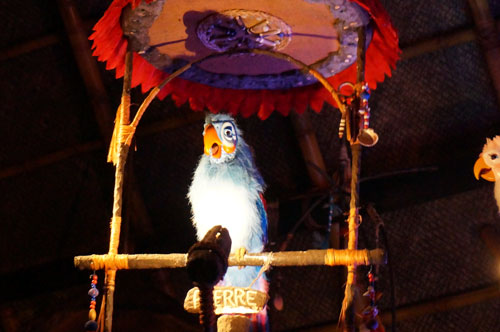 The Enchanted Tiki Room first opened in Disneyland on June 23, 1963. It was also an opening day attraction in Disney World’s Magic Kingdom. This theater-in-the-round show has seen some modifications over the years, but it has remained largely the same throughout its history.

It’s a nostalgic kind of attraction, but there’s hardly ever a wait. It’s a great one to save for the afternoon hours when crowds are highest, temperatures are hottest, and rain showers are imminent.

Here are ten things you don’t know about the Enchanted Tiki Room.

Part of what makes the Tiki Room continuously endearing is the catchy tunes. After all, this is a show about songs.  Some songs like “Let’s all sing like the birdies sing” are familiar. The most famous of all though is “In the tiki, tiki, tiki, tiki, tiki room.” The famous Sherman Brothers wrote the song in 1963, and it was the first song written for an audio-animatronic attraction. With all of these fun songs, it’s impossible not to sing and even dance along.

Tokyo Disney also has a Tiki Room. It started as a clone of the Disneyland show, but it closed in 1999 and reopened shortly thereafter as Enchanted Tiki Room: Now Playing: Get the Fever. That show ran for nine years, then the show was re-themed as The Enchanted Tiki Room: Stitch presents Aloha e Komo Mai. Yes, you read that right – Stitch shows up in the Tiki Room.  In this version of the show, the tropical theme continues, but Stitch torments the birds in this high-energy Vegas night club-esque setting.

There are 55 audio-animatronic birds including toucans, cockatoos, and more. There are also orchids and other plants that play a part in the show. In total, there are an amazing 225 audio-animatronic figures. These figures sing, dance, and provide some dialogue to make the show exciting.

Four macaws host the show, and each has distinct accents. This has been true since the very beginning. Have you ever realized, though, that their feathers correspond with their home country? Jose, who is white and green, is from Mexico. Hailing from Ireland in green, white, and some orange is Michael. Pierre is from France, not the United States, dressed in red, white, and blue. Finally, Fritz, the German bird, has red, black, and white plumage.

When the attraction first opened in Disney World, it was called Tropical Serenade, though the show is identical to the Enchanted Tiki Room in Disneyland with a unique pre-show. In 1998, the attraction became known as The Enchanted Tiki Room: Under New Management, and Iago (Aladdin) and ZaZu (Lion King) were added to the show with a new story line. Iago wanted to re-theme the show feeling like it was outdated, but ZaZu cautioned against angering the tiki gods. The show also incorporated familiar songs like “Friend like me” from Aladdin.

In January 2011, there was a fire in the attraction. Although no guests were hurt, several of the audio-animatronics were damaged or lost, Iago being one of them. Did the curse of the tiki gods finally catch up to him, or was it merely coincidence?  Maybe a nostalgic Disney fan got his revenge?  (Honestly, I did not do it!)  Either way, the attraction reopened in August, 2011, with the original name, story, and soundtrack restored.

When the Tiki Room was first conceived, it was going to be a dinner show with the birds and plants entertaining the guests while they enjoyed a South Pacific meal. In fact, the fountain at the center of the attraction was supposed to be a coffee station. If you look at the Disneyland version from above, you’ll notice that it’s attached to the Jolly Holly Bakery and Aladdin’s Oasis as well as restrooms. This is, in fact, the only attraction with restrooms in the queue.

Most of the attractions in Disney Parks have sponsors who maintain the attraction and get advertisement in return. The Tiki Room was once sponsored by United Airlines. When the attraction first opened in Disneyland, there was a push to vacation in Hawaii. The South Pacific theme combined with an airline sponsor would be good marketing for a vacation in Hawaii. Eventually this interest waned, and Dole Whip began to sponsor the attraction in 1976. This relationship has continued, and it remains one of the few places on property that guests can buy this popular treat.

The Tiki Room was the first attraction to be air-conditioned. As I mentioned above, this makes it a great attraction for the afternoon. While it is a nice break from the extreme heat of Florida and California, the air-conditioning wasn’t installed for the comfort of the guests but for the computer systems. You see, the audio-animatronics require sophisticated computers. If the computers overheated, the characters wouldn’t function.

I’ve talked a lot about the audio-animatronics in this article, and that’s for good reason. The Enchanted Tiki Room was the first attraction to incorporate these sophisticated characters. Walt was at a store one day and noticed a talking toy bird. He bought the bird and sent it back to his Imagineers to dissect it and figure out how it was made. He also bought a second and sent it to his beloved wife, Lillian. From then on, Walt included audio-animatronic figures that synced sound with movement, in many of his attractions.

Are you a fan of Walt Disney’s Enchanted Tiki Room?