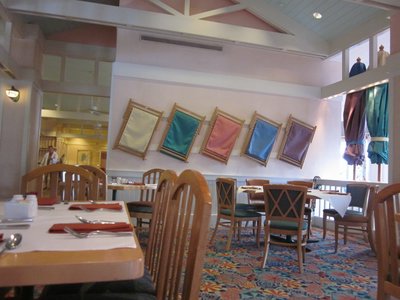 In our family, we aren’t really buffet people. We aren’t picky, but we would rather eat out less and do so at places that serve higher quality food. And often, buffets have appropriately earned a reputation for dull, uninteresting, and not-so-high-quality food. Fortunately, there are a number of buffets at Disney World that are worth the price of admission. Rather than poor quality and boring, the buffet locations help to give Disney World dining a good name.

Let’s take a look at some of my favorites:

This gem is located inside Disney’s Beach Club Resort and carries on the nautical theme of its location. The breakfast operates at a Disney character meal, and typically includes Minnie, Goofy, and Donald. There are no characters at dinner, but you can enjoy a nice selection including mussels, steamed clams, corn-on-the-cob, and potatoes. There are plenty of choices for those who aren’t into seafood, including chicken and BBQ Ribs.  Plus, it is just a short walk or boat ride from Epcot.

I’ve got to admit I’m a sucker for Disney’s Grand Floridian Resort and Spa. While I can’t often afford to partake in all the luxury this flagship hotel has to offer, I can occasionally just walk around the grounds and absorb the sumptuousness. Fortunately, I was able to afford a trip to 1900 Park Fare for a Disney character dining experience. The buffet has a great range of high quality food – think prime rib, Tomato Florentine soup, salmon, and chicken marsala. You get some personal time with Cinderella, Prince Charming, and other Cinderella characters who are really a lot of fun. You can get there easily from Epcot or the Magic Kingdom since the Grand Floridian is on the resort monorail line. All in all, a good choice.

This buffet with African-inspired foods is away from most places that people dine. Located inside Disney’s Animal Kingdom Lodge, you will need to make a bit of a trip if you aren’t staying nearby. But Boma is worth it. If you love to try different flavors and could do without any more typical fried stuff, make your reservations now. And you will need Advanced Dining Reservations – even through Boma is away from the main dining locations, it is usually popular and busy. How about trying some creamy carrot and ginger soup, sweet potato pancakes, spiced roasted chicken, or curried coconut seafood stew? And this place is famous for its signature desert – Zebra Domes – where kahlua meets chocolate ganache. In fact, if you decide not to eat at Boma, you might want to stop by the grab-and-go food location at the Animal Kingdom Lodge called The Mara to get some Zebra Domes anyway!

What do you think about Disney’s buffets?