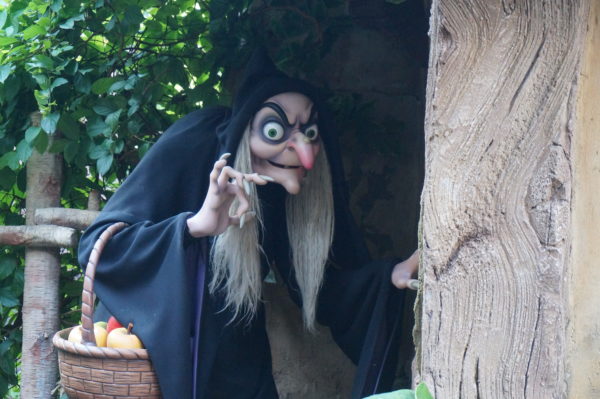 I tend to be a bit nostalgic about Disney World, but not quite everything makes me as nostalgic. There are some things that have been taken from Disney World that I honestly don’t miss, and that’s what we’re going to talk about today!

Florida is known for its afternoon showers. Sometimes they’re downpours; sometimes they’re quick drizzles. Prior to 2003, every time in rained in Disney World, the bright yellow ponchos also made an appearance. It seemed like everyone had them, and they created a sea of yellow throughout the parks.  Disney replaced them with clear plastic ponchos that are equally uncomfortable, but they serve their purpose!

In the late 1970s, Disney removed individual ride tickets and introduced unlimited tickets. This means guests could pay one fee and ride everything. For those who didn’t like to ride or chose to ride tamer attractions, this was a more expensive option, but those who rode mostly E ticket attractions really liked this because it saved them money. I can’t imagine paying individually for every attraction I wanted to ride!

Interestingly, Disney fans still return to the most popular mega-attractions as “E ticket” attractions – even though they no longer require a ticket.

In 2003, Disney replaced ExtraTERRORestrial Alien Encounter with with Stitch’s Great Escape in Tomorrowland. Stitch, a cute alien from a Disney animated movie, shouldn’t be all that scary, but the confined spaces and restraints overwhelmed many people.

Snow White’s Scary Adventures, despite having “scary” in the name, was should not have been too scary – especially in Fantasyland.  However, the evil witch at the end of the ride was so realistic that many kids left the attraction in tears. Disney made the attraction less scary in a 1994 renovation, but the attraction ultimately closed in 2012 to make way for Princess Fairytale Hall as part of the New Fantasyland expansion. The witch lives on in Seven Dwarfs Mine Train, though!

Moving from Individual to Unlimited Tickets was a major step for Disney Parks, but Disney World made another technological advancement with FastPass+.

Prior to 2013, Disney World guests had to physically go to an attraction to get a paper FastPass return ticket. They then had to hold on to this paper ticket until their FP return time and present it to the Cast Member.

In 2008, Disney began working on MyMagic+, a system that would give each guest at MagicBand with the technology to serve many functions including pre-registering for FastPass times and a digital record of FP+ tickets on each MagicBand.

The new system, which was released to the public in 2013, is much easier to use and saves a lot of steps! What’s more, the RFID technology has even more capability that what it’s currently being used for, and Disney is harnessing and refining this technology all the time!

I may get some hate mail over this one, but here I go.  Mickey’s Magic Wand was more of a sight than an attraction – it was visible to everyone going to Epcot. This giant Mickey hand showed up in 2000 for the millennium celebration. It weighed 500,000 pounds and stood 257 feet tall over Spaceship Earth.

The structure was removed after a seven-year installation.  Personally, I thought it ruined the perfect symmetry of Spaceship Earth, and I’m glad that thing is gone!

What don’t you miss in Disney World?