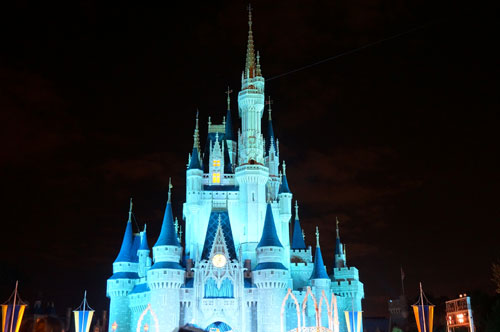 There are many things that are similar in Walt Disney World and Disneyland. Both theme parks were designed with incredible attention to detail, both parks organized around lands the transport you to a different time a different place, and both parks share some common, classic Disney attractions like Space Mountain, Pirates Of The Caribbean, and the Haunted Mansion.

While there are plenty of similarities, there are also quite a few differences as well.

Let’s take a look at seven things you can find at Walt Disney World but not at Disneyland:

When Walt Disney and his company designed Disneyland they were constrained by both money and space. In the end, the Disneyland property hosted three company-owned resort hotels. Compare that to the more than two dozen resorts spread across the Walt Disney World property today. The resorts at Disney World offer unique themes, architecture, and design. They can transport you to faraway places ranging from Africa to the Caribbean, from New Orleans to the future. At Walt Disney World you have many choices for staying in a resort on Disney property.

When you run an operation the size of a city, you need efficient ways to get people from one place to the next. Since Walt Disney World is so large and so spread out, it needs literally dozens of transportation options move folks around. Because Disneyland is far more compact, it doesn’t need three monorail lines, dozens of boat, and dozens of buses like Walt Disney World.

Legend has it that, when Walt Disney and his fellow Imagineers designed the original Jungle Cruise at Disneyland, they wanted to include real animals. However, someone pointed out the tigers like the water and can jump across it. Using real tigers would put guests in great danger. That eliminated real animals from the attraction. That setback did not mean that the Disney organization would give up on including live animals in its parks. Well Disneyland is basically free of wild animals, Disney’s Animal Kingdom at Walt Disney World is literally full of them. From zebras to lions, visiting Kilimanjaro Safari’s at Disney’s Animal Kingdom is like taking a trip on an African safari without ever leaving Florida.

Once again the blessing of size comes out at Walt Disney World. Disney offers not just one but two complete water parks in Florida. Each has a unique theme. At Blizzard Beach you can explore the frozen terrain supposedly caused by a freak Florida snowstorm. At Typhoon Lagoon you can check out the oddities created when a typhoon blew through. Both parks are well done with great Disney details. They also provide a wonderful way to cool off from the oppressive Florida heat.

Yes, both parks have queues because, at least for now, waiting in line is an inescapable part of the theme park experience. However, Disney has invested far more in the queues at Walt Disney World than at Disneyland. Part of this could be that many of the queues at Disneyland can be partially or fully outside since the weather is not nearly as hot and muggy. Another angle is that Disney has decided to make waiting at Walt Disney World more pleasant by adding plenty of themed elements to check out as well as fun interactive games.

Some folks love it and some folks hate it, but the current truth is that FastPass+ is only available at Walt Disney World. Well Disneyland still uses the old-fashioned paper-based FastPass, Walt Disney World now buzzes with FastPass+ kiosks, cast members wielding iPads, and guests constantly staring at their smart phones to check and revise their scheduled attraction times.

Which do you like better: Disneyland or Walt Disney World?