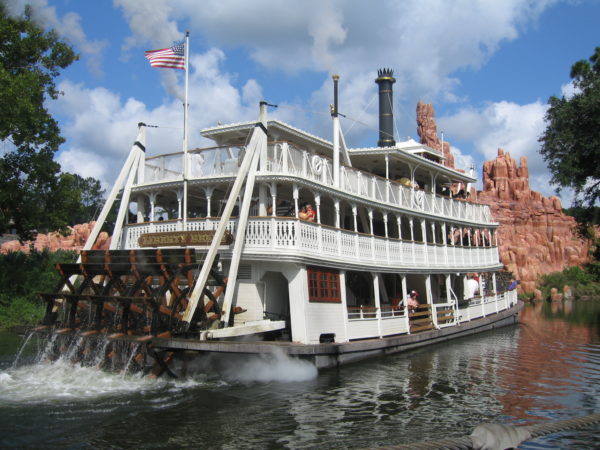 The Ultimate Guide to Frontierland in the Magic Kingdom

Frontierland was one of the themed lands in Magic Kingdom on opening day. The 1971 version had only three attractions.  Two of them are still operating today! The third, Davy Crockett’s Explorer Canoes closed in 1994.

It seems strange to have such a large area all but empty on opening day, but Disney had big plans for the rest of Frontierland.

That’s some interesting information. Now let’s take a look at the attractions and dining in Frontierland!

Frontierland is the second stop on the Walt Disney World Railroad, which is good because it’s a long walk from the entrance. This is especially convenient if you’ve made it to Frontierland in your first half of the day and you want to go back to your resort hotel for a mid-day break. Just hop on the railroad, return to the Main Street USA station, head back to your hotel, and return later in the afternoon!

The other great way to use the railroad is to go between lands for FastPass return times. It’s a quick way to travel between lands in Magic Kingdom!

The Frontierland stop will also take you directly to Fantasyland, which is nice because you don’t have to walk between lands in the heat and humidity. There’s not much to see on the ride between Frontierland and Fantasyland except that the track parallels a real water canal on the north side of Magic Kingdom. Since you are in Florida, you just might see a real alligator lounging in the canal!

Rivers of America is a man-made river on which the Liberty Belle Riverboat carries guests on a 12-minute historical journey. Guests are free to wander the three decks of the riverboat as a narrator tells of his days piloting a riverboat on the mighty Mississippi. Check out the history of the beautiful Liberty Belle.

Davy Crockett’s Explorer Canoes used to sail on Rivers of America from opening day until 1994.

Rivers of America encircles Tom Sawyer Island, which is actually two islands connected by a suspension bridge. It opened in 1973, just two years after opening day. This is different from the Disneyland version, which consists of only one island. The northern island in Magic Kingdom has a log fort called Fort Langhorn, which guests can explore.

To get to the island, you must board a raft and travel across Rivers of America. You just might see the Liberty Belle crossing your path. Once you get to the island, there are caves to explore, bridges to cross, and lots of tunnels and play areas.

The island, which is themed after Mark Twain’s famous piece of American Literature by the same name, is a great way to escape the crowds, but it is an island with no restaurants, so be sure to bring a snack and plenty of water if you plan to hang out for a while.

Big Thunder Mountain Railroad is billed as the wildest ride in the wilderness, and it sure is. This opening day attraction has been delighting guests since 1980, and it remains one of the most popular thrill rides in Magic Kingdom. It’s also a hugely popular ride in Disneyland, and the experiences are nearly identical. The tracks are mirror images of each other, which means that they run opposite directions. The only other difference is the color. The one in Florida is a bit more orange to match the surrounding landscape.

Splash Mountain is the other thrill ride in Frontierland, and wait times for this attraction can get very long. Unless you plan to ride first thing in the morning, at which time you can usually walk on a couple times in a row, you’ll need a FP+ to avoid standing in the heat for very long.

This log flume ride features some characters and songs from the 1946 movie, Song of the South, but there isn’t much reference beyond that, which has allowed the attraction to avoid too much scrutiny and remain relevant to present day visitors. You don’t need to know anything about the movie to enjoy the ride.

Once you board the log, you’ll realize that one of the characters, Br’er Rabbit, is in a bit of a predicament. He’s on his way to his Laughing Place, but Br’er Fox and Br’er Bear have other plans. There are lots of cool effects to see along the way, and at the end of the attraction, on the way up the last lift hill, you’ll see that Br’er Rabbit has been caught and he’s begging Br’er Fox not to drop him into the briar patch. His pleas are useless, and you plunge 50 feet into the briar patch with him. You will likely get at least a little wet on this attraction, and it’s possible that if you sit in the front of the log, you will get drenched!

The Disneyland version opened a full three years before the Disney World version, and Imagineers learned a couple things and made some appropriate changes. The logs in Disneyland do not feature side-by-side seating, so it has lower capacity; the logs in Disney World can fit eight people comfortable and sometimes a third child allowing for a much higher capacity and a better experience for guests.

Be sure to smile as you start to drop! You can get your photo at the end of the ride!

While the show is becoming a little dated, it’s a great show for families, and it’s a welcome opportunity to cool down in some cool air conditioning.

The Frontierland Shootin’ Arcade is a shooting gallery that allows you to test your marksmanship.

When it opened in 1971, the guns used real lead pellets. After a day of taking hits, each target had to be repainted every night using 2,000 gallons of paint every year. This cost combined with the growing fear and danger of real guns led Disney to replace the pellets with infrared lights in 1982.

For 50 cents in the form of credits – not quarters – guests get 25 rounds to shoot at 97 targets. Some targets light up and even move to add to the challenge. Upon “firing” your gun, sound effects like gun shots and music can be heard.

It may sound like a typical arcade game, and it really is, but the fun setting ties it into the land. The arcade simulates an 1850 shootout in Tombstone, Arizona over Boot Hill. There’s also a jail, a hotel, a bank, and a cemetery with animated targets.

Pecos Bill Tall Tale Inn and Café is the main restaurant in Frontierland. The food at this counter-service restaurant has changed over time, but currently has a Mexican and Tex Mex theme.  The inside looks like a Mexican-themed hacienda. What’s really nice about this restaurant is it feels very open air, but it’s actually inside with comfortable air conditioning. There’s also a patio if you’d like to sit outside.

You’ll order your food at the kiosk and pick it up at the counter, then you can customize your meal with a huge buffet of toppings. Entrees include everything from fajitas and burgers to vegan rice bowls and nachos. There are also Mickey Check Meals and Kids’ Meals plus desserts and beverages in a souvenir mug.

The Golden Oak Outpost on the boarder of Adventureland is a quick-service walk-up restaurant with a pretty limited menu including chicken nuggets, waffle fries, chocolate chip cookies, and fountain drinks. Nonetheless, these are important staples for many families, so it’s a great place to grab something that the kids are sure to eat.

Westward Ho is the only other eatery in Frontierland, and they serve a separate menu for breakfast and lunch and dinner. Start your day with a breakfast sandwich or a muffin with coffee, tea, hot cocoa, or juice. Later on, come back for a corn dog with chips. They also have an amazing Frozen Lemonade Slushy that will surely cool you off on a hot day!

Frontierland: What is your favorite part?