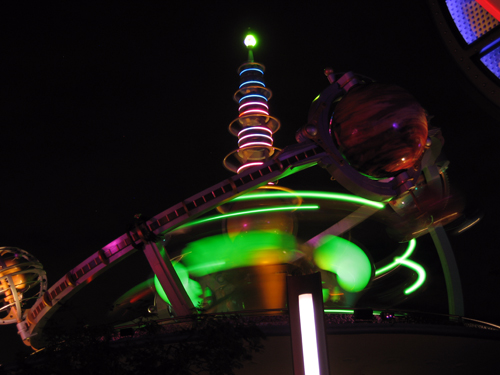 Tomorrowland originally opened with the park on October 1, 1971, as one of the themed lands of Disney World’s Magic Kingdom. This proved to be Walt’s most frustrating endeavor because the future was changing so rapidly that the Imagineers couldn’t plan and build before the plans would be outdated.

Instead of showcasing the future, Tomorrowland became “the tomorrow that never was.”

The current theming of Tomorrowland features a main street called Avenue of Planets where humans, aliens, and robots intermingle. There is a Chamber of Commerce and an Intergalactic Convention Center, which was converted to the Galactic Federation Prisoner Teleportation Center in 2004. The area handles undesirables like Experiment 626, more commonly known as Stitch, who is scheduled to be deported today.  Assuming Disney permanently shutters Stitch, which is currently a meet and greet, it will be interesting to see how this part of the story changes.

Also in the metropolis of Tomorrowland is an Expo Center that is currently hosting Monsters Inc. Laugh Floor.

Guests will also see amusing posters for things like the Tomorrowland Towers Hover Hotel, the Martian Pops Orchestra, the Space Home and Garden Show, and the Antique Rocket Show and Swap Meet. These posters are meant to indicate that there is a much larger community than what guests can experience on Main Street.

Tomorrowland inhabitants and visitors also have access to a main transportation center known as the Tomorrowland Transit Authority PeopleMover. If you have visited this “attraction,” you’ve ridden the Blue Line, which provides intra-city transportation and delivery services for businesses like Earth Crust Pizza (delivery to anywhere in the Solar System in less than two light years or your order is free). Did you know that there are other lines, too? The Green Line of the TTA PeopleMover is for commuting to the Hoverburbs, where people live in Tomorrowland. This “suburban” area is high above the community. Finally, the Red Line is for inter-galactic travel.

Another popular attraction is the Astro Orbiter. The story goes that the League of Planets is giving inexperienced pilots the chance to learn how to fly their own rocket ship before setting them free in the galaxy. Think of this as a futuristic drivers training program.

There are some other fun theming things like the Metrophone serviced by the Galactic Communication Network: “Bringing the world closer together. Toll Free from anywhere in the galaxy.” There is a Newsboy Robot near the TTA who can print the daily paper “while you wait.”

Cosmic Rays Starlight Café, where Sonny Eclipse performs daily, is the first Earth restaurant franchise from outer space. If you’ve never eaten here, you should stop by on your next trip. The food is out of this world!

Finally, the Merchant of Venus (a play on Shakespeare’s Merchant of Venice) and Mickey’s Star Traders offer citizens and visitors goods such as Coca-Cola and other necessary wares. Outside of the Merchant of Venus is a large black globe weighing in at over 6 tons that shows maps of the galaxies because anyone could get lost in such a huge area. Spin the globe, which sits on a fountain of water for easy and smooth rotation; can you find Cinderella Castle?

A story is a living and dynamic thing, and if it isn’t communicated well to Magic Kingdom Tomorrowland guests and Cast Members, it will die.

Tomorrowland is a huge metropolis with its own distinctive logo, and such a large land requires a proper power facility. Until February 9th, 2015, Tomorrowland Light and Power Company, a 15,000 square foot space at the Space Mountain exit served the theming purpose of providing power to all of Tomorrowland.

Outside of Space Mountain is a row of mechanical palm trees that provide power to the futuristic transformers on the side of Starport Seven-Five (Space Mountain). When the metallic palm fronds are extended, they capture solar energy, which is then stored in the coconut-like globes until it is collected and stored in the transformers. As the energy is collected, these globes begin to glow then, as an added benefit, they light the area. Guests may notice that one of the fronds is permanently stuck in a half-way position signifying that it is currently being harvested. The implication is that the coconut globe will be harvested, emptied, and restored and will soon capture more solar energy and return to its extended position.

Tomorrowland Light and Power Company arcade is now closed, presumably because changes in Florida law ban internet cafes and games that allow guests to win prizes worth more than $0.75. To avoid future problems, and since the arcade probably didn’t generate enough income and attendance worth keeping it open, Disney decided to close the area.

The problem is that the story of Tomorrowland has been so forgotten that the closing of a significant but obscure building like the Power Company doesn’t raise concern about how it will affect the rest of the story.

Do you know Tomorrowland’s backstory?