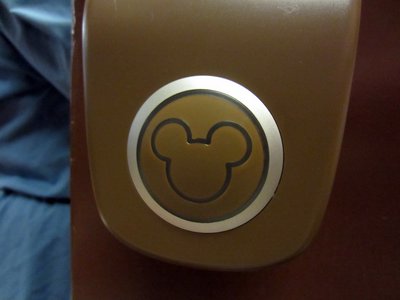 The Risks And Potential Rewards Of MyMagic+

For a huge initiative that has only seen its roll out in the most limited ways (like the new gate-less entrances and RFID annual passes), MyMagic+ has certainly generated plenty of buzz across the Internet. In my experience most of it has been less than positive in the Disney fan community.

People seem to be skeptical of the RFID technology, the data privacy issues, and the planning that is enabled, or maybe required, to get a better vacation experience using MyMagic+.

However, we are still early on in the MyMagic+ initiative. Let’s take a look at some potential upsides and downsides.

For those folks who visit Disney World infrequently, MyMagic+ seems to offer some great opportunities for advanced planning. I think those super Disney fans who visit Disney World frequently see this need, or option, to plan as a burden. But many folks don’t visit all that often. And they want to have a good time despite knowing that Disney is a huge place and can be complicated for newbies. For them, having a plan probably means less stress, and therefore, more relaxation and more fun. So, let’s keep in mind, that while the planning that MyMagic+ enables might not be something everyone wants, there is probably a large and important group (those who come occasionally, stay at a Disney Resort Hotel, and spend big bucks) where MyMagic+ will likely be quite welcome.

Disney is well known as a company that listens to its customers. If you’ve ever walked into a Disney theme park and been approached by a Disney Research Cast Member, you know how this goes. Disney constantly collects data and feedback, and smartly uses that information in its planning and decision making process.

For example, Disney Research apparently showed that one of the biggest complaints that people had about visiting Disney Springs was the terrible parking situation. And that seems to have been a significant factor that shaped the revised plans for Disney Springs.

There was plenty of chatter on the Internet raising concerns about the new “touch to pay” terminals at Disney cash registers. Originally, the plan was to allow resort guests to make purchases under $50 by simple touching their fancy RFID enabled room key to the reader – with no PIN required. Initially that seems like no more risk that today, when using a room key with a magnetic strip. But there is a difference:  your RFID card actually broadcasts its number to the world across a short distance, which is what allows a touch vs. a swipe. And bad guys with the right technology could read your RFID number from afar and then masquerade as you, running up big bills for you. A minor PR rumble ensued, and Disney initiated a new policy requiring a PIN number when making a RFID purchase.

Long story short: Disney listened and adjusted its plans, and that is smart.

Because bad guys can potentially read the RFID number from your MyMagic+ card or wrist band, there is a chance they can use it with bad intent. As discussed above, the risk of using a pirated RFID number for making purchases is mitigated because Disney now requires a PIN, but other risks remain.

A thief who has your RFID number could reprogram it into their own card or wrist band and use it to gain park admission using days from your pass. With the use of fingerprint identification, it seems that this risk is relatively low unless they get your ticket number before the first time you enter the park, which is the point at which Disney associates your fingerprint with your ticket. If this happens, you can probably get to Disney Guest Services to get things straightened out. They would very likely give you the days back with little fuss, and Disney would hold the bag for a loss like this.

One concern that many still have is regarding RFID key access to Disney resort hotel rooms. If a thief were to get access to your RFID number, they could theoretically get access to your hotel room – and subsequently steal items from your room, or worse. We haven’t heard of any issues like this yet, but it does seem like it might be a security hole.

Data privacy is a huge concern these days. If you’ve ever known anyone who has had his or her  identity stolen, you will understand why.  Disney has to worry not only about theft of your personal data from outside its organization, but also theft from inside. The theft could be as simple as an overzealous marketing intern who wants to use the data in unauthorized ways, to as complex as a criminal ring that wants your data to conduct wide-spread theft.

While there is plenty of potential for theft, MyMagic+ also provides plenty of potential for amazement. For the first time ever, Disney will have new reams of detailed data on how you tour Disney World. Far beyond today’s counts of how many people visit certain attractions per hours, Disney will now understand who those people are, how often they visit, what else they like, etc.

For example, if you are a fan of The Carousel of Progress and ride it several times in each visit, Disney might create an offer of special merchandise or a special event with an Imagineer who could give a presentation on the classic attraction’s history. Disney will be able to target offers, specials, and events with new levels of precision and accuracy that may allow Disney to both earn more money and allow guests to enjoy all kinds of new experiences with more offers specifically tailored to your interests.

The world of information technology is changing rapidly. Originally it began with deploying computers and eventually turned into connecting those computers to the internet. Many computer scientists believe that “big data” is the future of computing – where we finally learn how to harness, analyze, understand, and put to use the huge volumes of data organizations now collected on a regular basis.

The implications are fascinating, and Disney might just be on the verge of something incredible.

Do you think MyMagic+ is worth $1 billion?