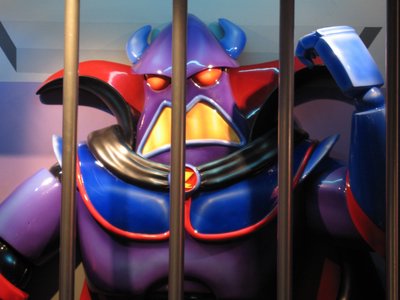 The Pixar Impact On Disney World

Back in 2006, some wondered if Disney’s purchase of Pixar was a good idea. On one hand, $7.4 billion was a staggering sum of money, and in the past Disney had created some of the most memorable animated characters and films of all time. But on the other hand, Disney hadn’t created any lasting characters in years – and it is those characters that are the life blood of the company, fueling movie sales, merchandise, and theme parks attractions.

In the years since Disney took control of Pixar, they have made good use of Pixar. You might be surprised at the long list of all the places Pixar characters have ended up:

In late 1998 Disney opened this attraction which features Buzz from the Toy Story movies. While the show building and track layout date back to the 1972 attraction If You Had Wings sponsored by Eastern Airlines, this “dark ride meets video game” was one of the first Disney rides to feature interactive elements. Instead of riding through and watching things as you rode by, you are part of the action by shooting targets and earning points.

In the past Monsters used scares to generate power, but now they use laughs. This is an interactive show where monsters, animated on-the-fly on huge screens, tell jokes and interact with the audience. They also tell jokes from audience members who can text them in before each show. Every show is slightly different. It’s corny and entertaining, and the technology is simply amazing.

If you are a Toy Story fan, you might enjoy stepping into the movie in this fun, noisy restaurant. The pizza gets mixed reviews, but the games are fun and the surrounding are entertaining.

While at its heart it is another video game on a track like Buzz Lightyear’s Space Ranger Spin, this attraction definitely takes it to the next level. That explains why the FastPasses for the entire day are often gone within the first few hours of park opening. Fun twirling cars, spring- action guns, amazing 3D animation, and great Toy Story characters all come together to make for one of the most popular attractions in all of Disney World. Since the FastPasses go quickly, plan to get one early in the day or plan for a long standby wait.

The Animal Kingdom Tree of Life is the signature icon of the park and holds this attraction which combines a 3D movie, in theater effects, and animatronics. The movie is fun, but if you’ve got some folks who are truly frightened by bugs, you may want to pass on this.

Featuring terrific performances in a presentation that rivals anything on Broadway, this show combines original music, puppets, colorful costumes, and props in a way that is original and bring a fun but necessarily shortened version of the Pixar movie to life. You are sure to come out humming the tunes.

The Seas with Nemo And Friends / Turtle Talk With Crush

The former “Living Seas” pavilion gets two doses of Pixar. The first is where you board an Omnimover “Clam-mobile” and pass by scenes from the movie. You eventually get to look into real, huge aquariums where Pixar characters are projected into the water in a very clever way. The second is Turtle Talk With Crush, a product of Disney’s Living Character Initiative. Here kids can actually interact with Crush on screen – talking back and forth in a live conversation where both ask and answer questions. The technology is seamless and impressive.

You’ve been able to see Pixar characters at Disney’s All Start Movies Resort for some time, but now you can see entire wings on Disney’s Art of Animation Resort dedicated to Finding Nemo and Cars. This resort has many interesting innovations, from the separated check in desks to the music that plays underwater in the pool. It’s a Disney Value Resort, but it has plenty of Disney fun, and offers family suites that can sleep six people with the clever use of a folding bed.

Are you surprised at all the places where Pixar shows up in Disney parks? I was – but overall I think that Buzz, Woody, Nemo, and all their friends have made Disney World even more fun.