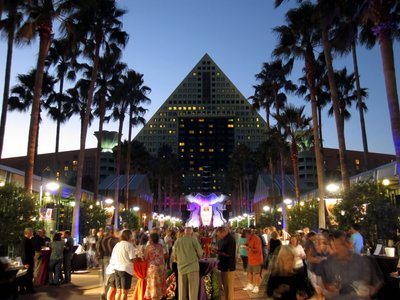 The Other October Disney Food Festival

Each October, many people look forward to the big food festival at Disney World – the Epcot International Food and Wine Festival that primarily takes place in food kiosks around World Showcase lagoon. But you might not know that Epcot isn’t the only place on Disney property that holds a food festival.

The hotels are known for their unique style of architecture, which doesn’t so much recreate a different time or place, like the Polynesian takes you to the south Pacific or Port Orleans takes you to the Bayou. And they are also known for housing some of the finest restaurants on Disney property – including Todd English’s bluezoo, Il Mulino New York Trattoria, and Shula’s Steak House.

With a focus on fine food, it makes sense that these hotels put on their own food festival. It isn’t on the scale of what happens at Epcot, but it sure is fun.

This year is the third for the annual Swan & Dolphin Food & Wine Classic. The festival includes both food and beverage seminars in the late afternoon as well as food kiosks that are outdoors on the huge walkway that connects the two hotels.

Thirty different stations offered food that is highlighted in the restaurants from the hotels, with a range of high end items including beef brisket from Cib’s Smoke House, shrimp cocktail in steam rollers from bluezoo, lasagna from Il Mulino, and dragon rolls from Kimonos.

Much like the festival at Epcot, you can purchase individual food and drink items – although you needed to do so with tickets and not cash.  Most food items cost 2-5 tickets, and each ticket costs $2.  But there was another option too.

The Food & Wine Classic offers an option not available at Epcot – hotel stay packages that also included a pass that allowed you to eat and drink all you want without paying for any individual items. One night for two adults with two passes for unlimited food and wine started at $285. Considering that you got both a hotel stay on Disney property and plenty of high quality food, that is a pretty good deal.