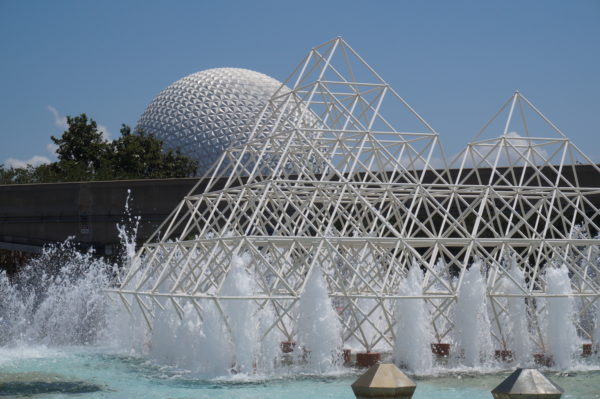 The Original Plan for Disney World

The 50th anniversary of Walt Disney World is fast approaching, and Disney has recently announced and even confirmed some major updates to Disney World including a promised entire redo of Epcot and a confirmed addition of Tron Lightcyle Power Run in Magic Kingdom.

In a 1968 Annual Report to Disney Shareholders, Walt and his team wrote, “Although many attractions will be familiar to the 76 million people who have already visited California’s Disneyland, many more will be unique to the new theme park in Disney World.”

The Disney World that we have today is very different from what it was years ago, but some of Disney’s current attractions and planned updates will actually honor, or build upon, some of the classic attractions from the park’s early days.  Here are a few examples:

With all of that in mind, let’s take a look at Walt’s original plan for Disney World including how some of those things came to fruition even years later.

One of the most familiar differences is that Walt envisioned Epcot to be a futuristic city where people lived. His nephew, Roy Edward Disney, says that his uncle wanted to build Magic Kingdom and the Disney resort hotels first so they could get money to build Epcot as he pictured it. After all, even Walt said he had no idea how his Experimental Prototype Community of Tomorrow would make them any money – but he didn’t seem to care.

Walt didn’t want to build another theme park. He said he already built the best park he knew how and he didn’t need to repeat himself. He even had a team totally separate from his Imagineers working on the city, which would include an entertainment area. Roy disagreed saying that most people from the Eastern United States would never travel to Disneyland, so building a theme park in Florida would provide accessibility on both coasts.

Unfortunately, Walt passed away in 1966 amid the arguments and his brother won by default. After Walt’s death, Roy Oliver assumed control of the company, which they shared, and he shifted the concentration to building a theme park.

As we all know, Magic Kingdom was the first theme park built in Disney World. In fact, it was the only theme park at the resort for the first ten years. A Fantasyland area already existed in Disneyland, and the one in Disney World would look similar but with different, sister-like attractions.

Snow White’s Scary Adventures had proven successful in Disneyland, so Walt wanted to change it up a bit for Disney World. It would be a similar dark ride but with Sleeping Beauty, Maleficent’s goons, and Maleficent as a fire-breathing dragon at the end of the attraction.

Peter Pan’s Flight was to be a Mary Poppins attraction with the same overhead track but with overturned umbrella vehicles. Scenes in the attraction would be chalk paintings from Bert, the street artist in the movie, and guests would fly over the rooftops of London.

The Sword and the Stone would be prominent in Fantasyland because Merlin the wizard fit better with the theme of the land than Mr. Toad. The attraction would be a dramatization of the duel between Merlin and Mad Madam Mim with each transforming into new creatures. At the end, Mim would become a huge dragon and Merlin would defeat her as a tiny mouse just like in the movie.

Considering that Fantasyland was so close to Liberty Square, Imagineers wanted to create a dark ride based on The Legend of Sleepy Hollow to work as a transition between lands. Ride vehicles would be hollowed out jack-o-lanterns, and the attraction would end with a confrontation with the Headless Horseman.

Snow Whites Scary Adventures existed in Magic Kingdom until 2012 when it was reworked as part of the New Fantasyland expansion.  Peter Pan’s Flight still exists today and is an ever-popular ride at Disney World.  These two attractions, specifically, were mostly imitated from Disneyland.

Frontierland was also an opening day land in Magic Kingdom, and Imagineers had very ambitious ideas for this land including one of the most impressive new attractions.

Thunder Mesa Mountain was going to be a four-story show building designed to look like the orange mesas of the American desert and Monument Valley with a throughway for the Walt Disney World Railroad.  Disney planned to build Thunder Mesa on the land where Splash Mountain and Big Thunder Mountain currently stand. Inside the building would be the Western River Expedition, a runaway mine train attraction, hiking trails, a canoe flume ride, and a Pueblo Native American Village.

What’s more, Imagineer Marc Davis even created a concept for laugh-packed boat ride through Wild West scenes based on a concept that Walt created in 1963 themed for a Lewis and Clark attraction for a theme park he was considering in St. Louis. This attraction would include 100 audio-animatronic figures; in fact, they had created a buffalo and a prairie dog that now stand in Living with the Land in Epcot’s Future World. This attraction was so serious that Mary Blair came in to consult on colors, Buddy Baker composed a theme song, and detailed sketches and a model were on display for many years at The Walt Disney Story at the entrance of Magic Kingdom. The concept art was even printed in the 1971-1972 guidebooks.

This area was going to cost over $120 million dollars, so it really became cost prohibitive given the tight budgets at the time. Western movies and TV shows were declining in popularity, and guests really wanted a Pirates Of The Caribbean attraction on the east coast. These factors led to the cancellation of this area – although the eventual arrival of Big Thunder Mountain and Splash Mountain certainly took cues from the original plans.

When Magic Kingdom opened in 1971, it already had more lodging options than Disneyland mostly due to the amount of land available in Disney World. These resorts included Disney’s Contemporary Resort, Disney’s Polynesian Village Resort, and Disney’s Fort Wilderness Resort & Campground.

The Disney Company started talking about Disney Resort Hotels as far back as 1967, a full four years before Magic Kingdom even opened. They created a full color map of resort hotels surrounding Magic Kingdom that were designed to be just as magical as the theme park itself.

Ideas included a Cape Cod Village, a South Seas glass skyscraper, Frontier Village, a Spanish Colonial Hotel, an Oriental Motel, a Dutch Hotel, and an African Hotel. The Yesterday Hotel was also an idea, and it was originally supposed to be inside the park in the area we know as Town Square. Could this idea finally come to fruition 50 years later with the rumored Star Wars Hotel?

USA Disney, also called the Tempo Bay Resort became Disney’s Contemporary Resort. Disney Imagineer Claude Coats even created concept art for an attraction that would lead from the resort to the back of Tomorrowland utilizing Bay Lake that would have involved dinosaurs in some way.

The Persian Palace Hotel would be near the existing Contemporary Resort on Bay Lake and would have an Arabian Night theme with an exotic far-East palace feel. The buildings would be jeweled mosques with landscaped courtyards, a terraced sundeck, sculpted swimming pools, and themed dining. It would even have a sheltered marina to sail guests directly to their individual rooms.

The Asian Resort Hotel wasn’t built until 1988, and by then it had become Disney’s Grand Floridian Resort and Spa. However, it was advertised as the Asian Resort as part of the early monorail recording and Stockholder Reports.

The Venetian Resort was to have an Italian theme with an enclosed small boat harbor and an intricate system of waterways leading to resort areas an unique shopping experiences.

Another resort that was very seriously planned was Cypress Point Lodge. Concepts were created, and everything was ready to go, but when the gas crisis hit in 1973, the project as delayed. Fortunately for us, the building became a reality by a different name: Disney’s Wilderness Lodge.

Finally, Walt’s original hand drawings of Disney World included a fully operational international airport with three parallel runways drawn on the land that is now the town of Celebration.

Despite Walt’s original view of what we know as Disney World as a real life town instead of a theme park, he somehow knew that it would become an international destination.

Even after Roy took over, the airport was still in the plans. After all. The Orlando International Airport that we know today didn’t exist until 1976, five years after Disney World opened. The Orlando McCoy Jetport (abbreviated MCO) was nearby, but it had limited capacity.

Walt wanted to funnel all of his Disney World guests through a single gate called “Main Gate” just like in Disney World regardless of whether they arrived by plane, train, or automobile. This Main Entrance would be at the front of Epcot and just across the street from the airport; Cast Members would staff an on-site Welcome Center where guests speaking different languages could get help in their native tongue.

When Orlando International Airport expanded rapidly and plans for Epcot changed dramatically, Disney quietly abandoned its plans to build its own airport. Instead, Disney partnered with Orlando International to make sure that all of the employees at this airport were up to Disney standards. Today, Disney Resort guests can catch a bus called Disney’s Magical Express that will swiftly transport them worry free straight to the doorstep of their Disney Resort Hotel.

Would Disney World have been better if Walt had lived longer?