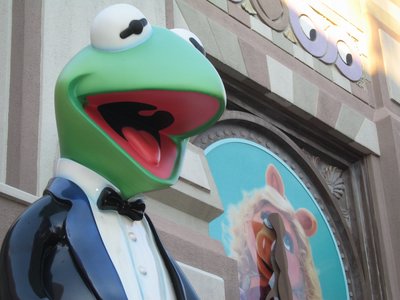 The Muppet Restaurant At Disney World That Never Was

Back in the late 1980s, Disney had great plans for adding Muppet characters into the Disney – MGM Studios theme park (now known as the Disney’s Hollywood Studios theme park).  The Muppet vision 3D show was just the start of what was to come.  Plans called for an entire Muppet Studios land to fill the back portion of the park.  Guests would be able to enjoy parades, live shows, and even a Great Muppet Movie Ride – a parody of great moments in Hollywood history done up in Muppet style, much alike lighthearted version of the Studio’s studios signature attraction The Great Movie Ride.

The restaurant in the area was to be titled The Great Gonzo’s Pizza Pandemonium Parlor.  And it sounds like you would have been a blast.

I’ve read to several articles recently about this restaurant.  One article was by Jim Hill (Source) and the other was at a web site titled The Neverland Files (Source).

What Can Go Wrong Will Go Wrong

Gonzo was to be the restaurant’s owner, and like so many things in the world of the Muppets, everything that could go wrong would go wrong.  One of the gags for the restaurant involved guests being able to hear Muppet characters climbing through the overhead ductwork, trying to find a way out.  Another gag was that doors leading to the kitchen would occasionally blow open, with smoke and chicken feathers filling the air.

Plans called for a small train track to run by all the tables and deliver the pizzas and food that was made in the kitchen by the Swedish Chef.  Televisions would play clips of Muppet shows, and occasionally you would get a glimpse of the craziness that was going on in the kitchen –where food was fighting the cooks for its dear life.

The walls were to be covered with photographs of Muppets and Hollywood memorabilia.

So why do we never see this restaurant, or the Muppet Studios area of Disney’s Hollywood Studios?

Sadly, Jim Henson died in the early 1990 from organ failure caused by an infection (not from pneumonia as initially reported).  While there were great plans and ideas between Henson and Disney, the final agreement to sell the Muppets to Disney was not complete before his death.

Disney entered into an extended state of negotiations with Henson’s family about the sale of the characters and company.  Even though Henson himself publically stated that he thought Disney would be good caretakers of his characters and his company, the deal to sell the Muppets to Disney was actually not complete until 2004.  That is why we never saw more of the Muppets in Disney’s theme parks, and that is why we never saw The Great Gonzo’s Pizza Pandemonium Parlor.  Given the new investments Disney is making in the Muppets characters, maybe someday we will see a Muppet-themed restaurant.

It turns out that Disney had done some of the design and engineering work for this Muppets restaurant before the plans were officially canceled.  They decided to use the work they had done in developing Mama Melrose’s Ristorante Italiano.