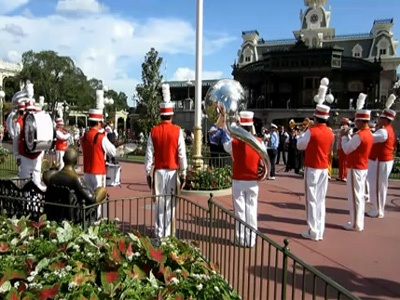 It is often said that Walt Disney was a very patriotic man. After all, he tried to get into the armed services as a young man before he was old enough to do so, and he so admired President Abraham Lincoln that he created an entire show dedicated to him (Great Moments with Mr. Lincoln) which many see as a predecessor to the Hall Of Presidents in Liberty Square at the Magic Kingdom.

Another way we see Walt’s spirit of patriotism is the Flag Retreat Ceremony that takes place every day at 5:00 pm. This has happened without fail every day since the park opened on October 1, 1971. The main flagpole on Main Street USA is just in front of the Main Street Train Station, just as you enter the park.

The ceremony lasts for less than 15 minutes, but it packs and a lot of music and patriotism.

The Flag Retreat Ceremony is moving, patriotic, and definitely worth seeing.

An Early Start To An Afternoon Treat

Preparations for the ceremony actually start at the beginning of the day as Cast Members look through the crowd for a veteran to honor during a ceremony at 5:00 PM. The veteran is instructed to return to Main Street about 15 minutes early for instructions on his or her role in the ceremony – primarily receiving the fly again marching down Main Street with the band at the conclusion of the ceremony.

What Happens During The Ceremony

After the main street band plays an opening tune from the balcony on the Main Street Train Station that overlooks Main Street USA, the crowd recites the Pledge Of Allegiance – typically led by a few children, often those of the Veteran Of The Day.
Next the band plays God Bless America and the crowd is encouraged to sing along. Most do.

Finally, the announcer honors the Veteran Of The Day by presenting the now-folded United States flag to him or her. This is usually followed by enthusiastic applause from the crowd has gathered. The band plays the Armed Forces Melody, and then the band, veteran, security guards, then Main Street area Cast Members march from the flagpole and about halfway down Main Street USA before turning off onto into the alley. The crowd cheers and applauds.

Photopass photographers are on hand to capture the moment, and I’ve seen reports that the Veteran Of The Day gets a complimentary photo of his or her participation in the event.

Get Ready For A Tear Or Two

While the ceremony itself is relatively simple, it is very moving. Many red blooded Americans, including guys like me, shed a tear or two with pride and appreciation for all the sacrifices that have gone into making America the country that it is.

I have also read reports (Source) with some special stories about certain participants. Some veterans, like those from the Vietnam era, have never felt honored by their country due to the nature of the conflicts in which they served. Through the flag retreat ceremony, some of them get to experience the honor and appreciation by their fellow countrymen that they never received, but that always deserved.

If you have never taken a few minutes to make your way to the flagpole on Main Street USA at 5:00 PM to witness this ceremony, I highly recommended. If you are an American, you will swell with patriotic pride and thanksgiving. And if you are not the citizen of the United States, you will get a unique insight into American culture.