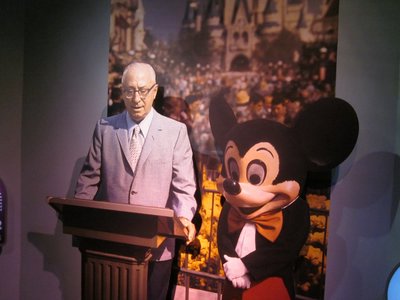 The Legacy of Roy O. Disney

If Walt was the heart of Walt Disney Productions, Roy was often the head. A creative innovator and risk-taker, Walt Disney did not always have the best brain for business. With Roy’s guidance, the company was able to survive some rough financial patches that might otherwise have derailed it.

Together From The Beginning

Walt and Roy co-founded Walt Disney Productions together, and Roy served as the company’s CEO for nearly 40 years. He largely stayed away from the creative aspects of the young film studio, and remained in the background as the studio developed into a powerful and multi-faceted multimedia company. However, Roy proved to have both dedication and foresight, and many of his unseen decisions had a very visible effect on the Disney of today.

One of the areas in which Roy O. Disney’s contributions can be most clearly appreciated is the success of Disney theme parks around the globe. Thanks to Roy, the Walt Disney Company took control of the ownership and operation of every feature of the first Disney theme park, setting the blueprint for the many theme parks and resorts to come.

That first park was Anaheim’s Disneyland Park. The time and expensive of creating the park had prompted Walt Disney to allow third party concerns to operate many shops and restaurants within the park limits. As the park became a runaway success, Roy O. Disney set about buying out those concerns until Disney was the sole owner and operator of every part of the Disneyland experience. The detail, continuity, and full immersion that resulted from this decision are now what set Disney parks apart.

Roy O. Disney was even more critical to the realization of the Florida Project, now known as Walt Disney World. Though Walt was involved in much of the conceptualization for the new resort, he would pass away five years before Walt Disney World opened its gates. Roy postponed his own retirement in order to shepherd the project to a successful completion. His decision-making ensured that Magic Kingdom would stand in its current location, and that Disney would retain control of operations at the Disney World resorts.

Roy’s dedication also helped to shape the future of Disney animation. Another of Walt’s unfulfilled dreams at the time of his death was a state-of-the-art campus for the California Institute of the Arts, a visual and performing arts institute of higher education. Under Roy O. Disney’s supervision, CalArts broke ground for its current campus in 1969.

The Genius Behind Walt

Roy O. Disney passed away on December 20, 1971, only two months after the opening of Walt Disney World and his own retirement from the Walt Disney Company. While many of his professional efforts went towards securing the legacy of his brother Walt, Roy created a legacy of his own that can’t be ignored. To help ensure that he takes his place in history alongside his brother, a statue of Roy O. Disney and Minnie Mouse now sits in the center of Magic Kingdom’s town square.