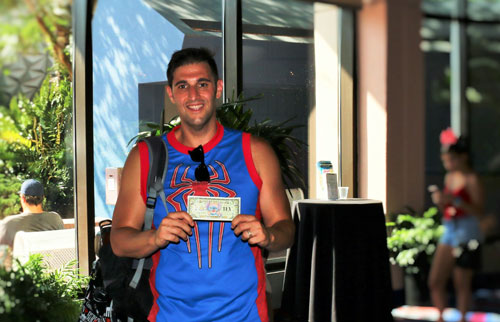 Disney Dollars were made from 1987 on with varying styles and characters to suit every collector and fan. There was even a $50 Disney bill put out for Disneyland’s 50th anniversary.

Sadly, Disney suddenly announced late last week that the iconic currency would no longer be available for purchase after Saturday, May 14, 2016. I had called around early that Saturday to see where I could still buy some of the Happiest Currency on Earth. Reports had already announced that Disney Springs and Magic Kingdom were cleaned out by early afternoon the previous day.

There I stood, counting the heads in front of me in the queue at Epcot‘s Guest Relations. I wiped my brow, enjoying the air conditioning after walking through the sweltering humidity outside. The line in front of me seemed to go on forever.

I was nervous I was too late. There was only one reason I was waiting to speak to Guest Relations at 5 pm on a Saturday, and I was certain everyone else was there for the same thing. I needed to get some Disney Dollars before they were all gone!

With family coming to visit, and a tiny niece I could not disappoint, it wasn’t just my desire to grab hold of a piece of Disney history that drove me that day. I always surprise her with a special keepsake on her visits, and this was my last chance to give her one of the collectible items.

I discovered that all of the $1 and $5 denominations were completely sold out. Only the $10 bills sporting Stitch’s smiling portrait from Disneyland’s 50th anniversary were still available. I knew it was fate; Stitch is my niece’s favorite character! Unfortunately, nobody could tell me exactly where to find them. The hunt was on!

My first instinct was Animal Kingdom, as it is the most remote of the Disney properties. Then I realized virtually every Disney fanatic would have thought of that. Hollywood Studios seemed like the next logical choice.

Imagine my disappointment when I found out that just an hour before I arrived they had handed out the last of the Disney cash. The girl at Guest Relations confirmed what I was afraid of: Animal Kingdom had also long since sold out. With a little cajoling, she finally agreed to contact Epcot for me. They still had a few left!

I made a mad dash to Epcot, hoping for success. So there I stood at the last Guest Relations on Walt Disney World property that purportedly still had some of the precious greenbacks.

The poor man in front of me was desperately trying to figure out where he could get cash out of an ATM. It seemed the run on Disney Dollars extended to a run on “real” currency. Since credit card purchases of the bills were limited to $50 and there was no limit with cash, hopeful buyers had cleaned out all of the park’s ATMs!

The moment I told the Cast Member at Epcot’s Guest Relations of my quest, other guests who overheard me rushed forward with fistfuls of cash, hoping to get in on the action. I waved my wad of bills and was rewarded with first dibs (After all, I did inquire first!), which left only a single $10 Disney bill.

Are you sorry to hear that Disney Dollar are gone?