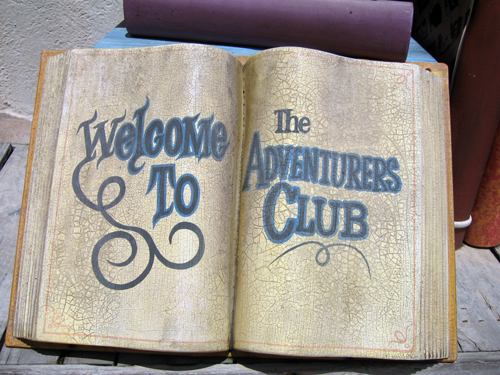 The Impact of The Adventurers Club Lives On

In 2008, The Adventurers Club in Downtown Disney Pleasure Island area (as it was known then) closed after almost 20 years of providing groundbreaking and unparalleled entertainment.

In June 2015, the building was torn down to make way for new experiences in Disney Springs – squashing many die-hard fans’ hopes that the Club would someday return in its current form and location.

While many people miss the Club (Kungaloosh!), its legacy lives on in some subtle ways. Since Disney is fully committed to providing more and more interactive entertainment (Sorcerers of the Magic Kingdom, Buzz Lightyear’s Space Ranger Spin, Agent P’s World Showcase Adventure, the Haunted Mansion queue, and on and on), they would be wise to further implement the lessons they learned – good and bad – from the Adventurers Club by applying them throughout the Walt Disney World Resort.

The Loss of an Icon

The Adventurers Club was an immersive Live Action Role Playing (LARP) experience in which guests would literally become part of the show either as 1930’s explorers or as drunks – depending on how the actors referred to them.

This attraction was especially popular with the theater geeks that worked in and around Walt Disney World and guests who wanted a totally immersive experience. After all, this is what distinguishes a theme park from an amusement park. A theme park puts guests in the show while an amusement park is just a conglomeration of attractions without a story line connecting them.

The Adventurers Club did a great job at appealing to this niche group, but it was a little overwhelming for the vast majority of Disney World guests who would head over to Mannequin’s or another Paradise Island bar for some liquid courage before being forced to make real or creative conversation with actors they didn’t know in front of people they didn’t know.

The problem was that no ladder system existed to allow guest to control on their own their level of interaction and involvement, where some guests could choose to simply observe while others might decide to just get their feet wet, and still others might want to participate completely in the act.

In addition, from a financial standpoint, the die-hard fans were perfectly happy to hang out in the Club for hours on end enjoying the show, which was unique every night. They would nurse their drinks, occupy space, and not generate the type of financial returns Disney expected.

Universal Studios took this idea and ran with it in their creation of two Harry Potter-themed lands. These areas allow guests to control their level of interaction. You can act like you would at any other theme park, or you can go a step further by buying an interactive wand and casting spells at designated windows. Some guests have taken it even further and played the role of Hogwarts students doing their homework at Three Broomsticks. Universal has made each level of engagement easy and accessible for all guests. This is exactly what The Adventurers Club needed.

Disney seems to have retained some learning from the Club and applied it to Enchanted Tales with Belle. The Enchanted Tales attraction doesn’t have the free flowing and ad-lib element that the Adventurers Club did, but it does offer a ladder of role-playing options from introductory to involved. Guests can join the attraction and watch the show passively without interacting directly. However, they can also volunteer for small, structured roles and become part of the show, adding just a few moments of their own personality when called upon. The show moves guests in and out of the attraction on a strict schedule, and people seem to love being a part of the presentation. A PhotoPass photographer is on hand to capture it all.

Hope for the Future

Although many fans of the original Adventurers Club are still grieving the lost hope of their favorite entertainment destination returning, perhaps we can hope for something bigger and better if Disney decides to further apply what they learned to other new attractions.

Similar clubs and destinations of the future should aim to provide easily accessible levels of engagement for all guests. Many contemporary visitors and theater lovers may want to fully engage in this live action role-playing much like they do with modern video games in which they become a character and participate fully in the story. Other guests may be hesitant to jump right in full bore and would appreciate a better-defined role like what they can get in Enchanted Tales with Belle. Still others may not want to participate at all, and would feel uncomfortable if forced into a role in front of strangers

In the future, Disney should aim to build interactive attractions and experiences that compete with and win against other modern forms of entertainment like LARP video games, web-based games, and phone apps.

Do you miss The Adventurers Club?